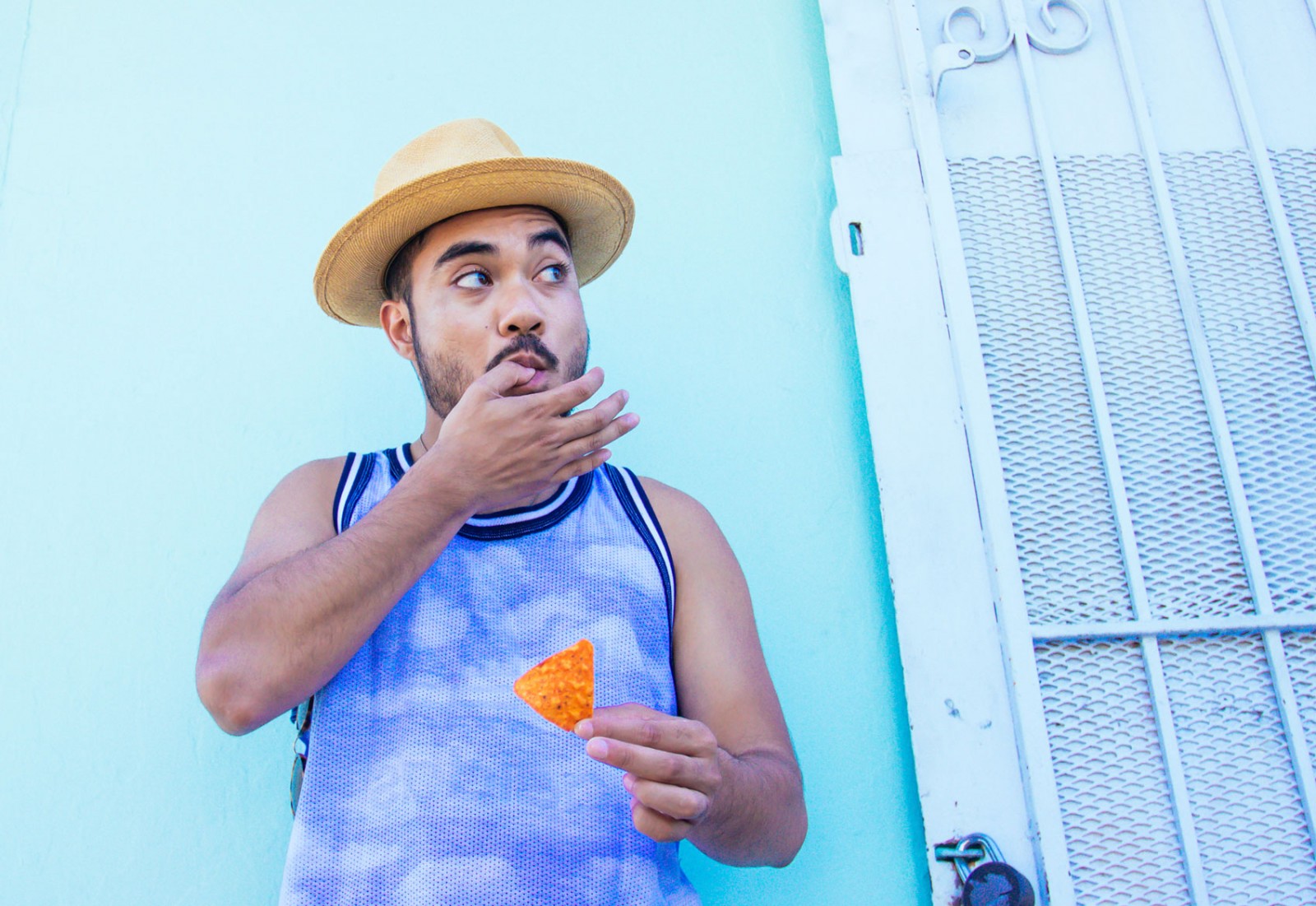 If you’re reading this, chances are you have built a shrine – both a metaphorical and physical one – in honour of Mr. Carmack’s existence. But if you’re not, here’s what you need to know about him. Mr. Carmack is part of an extraordinary creative collective platform named Soulection, whose artiste roster includes names like Ta-ku, Sango, Joe Kay — aka the interwebs’ favourite producers. He creates new music as often as he tours different cities, an example of this would be after he released his 2016 EP Yellow; just a couple of days after it was dropped, he continued to spoil his cult-like following with an additional 54 tracks on SoundCloud. Most importantly, he’s someone dudes who aspire to be DJs/photographers/Hypebeasts/part of #TeamSupreme can’t stop fangirling over. The affection he’s showered with is all well-deserved, of course.

Ahead of Laneway Festival Singapore ’17, JUICE speaks to the man himself — who’s evidently very high — over the phone to discuss how he absorbs music, what he thinks of American politics, and if print media is a waste of time (too soon, man).

You mentioned in a previous interview that you felt jaded after listening to sounds that sounded as though they had been recycled. As someone who releases songs relatively often, how do you ensure that your music is distinctive enough?
I try to write the music that I want to hear. Like, I always thought that good music was an amalgamation of different music, so, I like parts of house [music] or parts of Balinese music, I thought to sort of mix everything that I enjoy — taking elements of those things — and put them together would make for a great song. And that’s pretty much all I do when I create music.

“There’s some truth in that — that people aren’t completely original in their thoughts and they take ideas from other people to form their own.”

A few people argue that good music is determined on how profound the lyrics are. The music that you produce is what you identify as “computer music,” but you also have training in classical music, do you think there’s a particular way to appreciate music?
Hmm, no. My instinct is to say ‘no’ because I don’t want to limit anything. But I mean, like, just speculating on how people react to music, I’m sure there’s some truth in that — that people aren’t completely original in their thoughts and they take ideas from other people to form their own, so yeah, there’s some truth to that.

In another interview you said that people don’t take time to listen to music anymore…
Did I say that?

So, you said people don’t take time to listen to music anymore because reviews and opinions of a particular piece of work come out hours after it’s released. How do you absorb music?
Sometimes I absorb music quickly, which is why I’m kinda mad at that statement — sometimes I listen to something and know that I like it from the first time. It doesn’t mean I’m not absorbing, it’s just because it’s only been there for a [short] period of time. I hate what I said (laughs). But sometimes it takes a long time to understand, you know? Just listening to music in the moment would be enough, otherwise you listen to a song over a period of years and then you… I don’t know. Do your parents make music, Rathika?

Yeah, my dad was a producer.
Did you listen to [his music]? Crazy, right?

In a way, yes. You tweeted once upon a time that reprogramming your subconscious is difficult but something that needs to be done. What’s your subconscious like?
Whoa, what? (Laughs) I don’t know, can you answer it for me? I like computers a lot and I think computers are super organised the way they do shit and I’d like to be that same way… but also, I’m stoned (laughs), so that could all just be bullshit. I don’t know how to answer that, I’m sorry.

It’s alright, let’s move on to the next subject. I’m going to mention a string of topics and I’d like you to tell me what’s the first thing that comes to mind, okay?

“[Politics have] become a game — and an industry — for [politicians].”

American politics?
I hate it. I think it slows down progress — we glorify elections and its process too much. It’s become a game — and an industry — for them, so it’s not true politics anymore. It goes back to just being a manager at a restaurant — [a politician’s] no better than a manager at a restaurant. He’s just there to make money, put on the mask and a shirt. You need a true visionary for a political position, otherwise you don’t deserve it, I think.

Social media?
I like it, it’s fun. I’ve always been a part of it. I like MySpace. MySpace was fun.

“I do read stories on printed media… but I think it’s a waste of paper.”

Print media?
It’s kind of a waste of trees, but I do read stories on printed media… but I think it’s a waste of paper. I get 99% of the news on my phone nowadays — that’s just a fact. I’m not going to wait until 8am every morning to get my news, you know? I think print media is a good exercise in keeping physical media still intact, like if anything does go wrong, then we wouldn’t have to learn how to do it again. Do you like magazines?

Yeah, I work for one too.
I like magazines — if it’s like a lifestyle/art/music/culture magazine kind of thing, then definitely. I get a lot of fashion ideas from magazines too.

Those are topics JUICE covers too! So, what about the future?
It’s pretty scary, I think, in my eyes. But I’m optimistic about it. It’s crazy in the world these days but there’s also a lot of misinformation too — a lot of random people talking shit.

About?
I don’t even know what I’m talking about anymore (laughs).

How tired are you?
I’m just stoned and I’ve been on the phone for like four hours (laughs).

Alright, I won’t keep you for too long. Last question, when you tour to different cities, how do you create sets for an audience whom you’re unfamiliar with while staying true to your sound?
Well, I always know that the reason I get a touring gig or show is because of my music. So, first and foremost I’ve been playing like 60% to 70% of my music at most — if not all — for my sets. Unless it’s like a party set, then I’ll play a lot of old school throwback stuff, but for the most part, choosing my music is easy because I know what people have responded to and I know what people don’t respond to, but they’ll still listen to. Which song [of mine] do you like?

The one you produced for Denzel Curry, ‘2055 Freestyle’, was it?
Yeah, you like ‘2055 Freestyle’? No one’s ever said that before. You’re weird. I’ll play that in Singapore.

(Laughs) Will you really?
Yeah, for sure!

Great, I’ll take your word for it. That’s all the questions I have, we’ll see you at Laneway.
Thank you.

Mr. Carmack is set to play Laneway Festival Singapore ’17 on Saturday 21 January ’17 at The Meadow, Gardens by the Bay. By your tickets here.