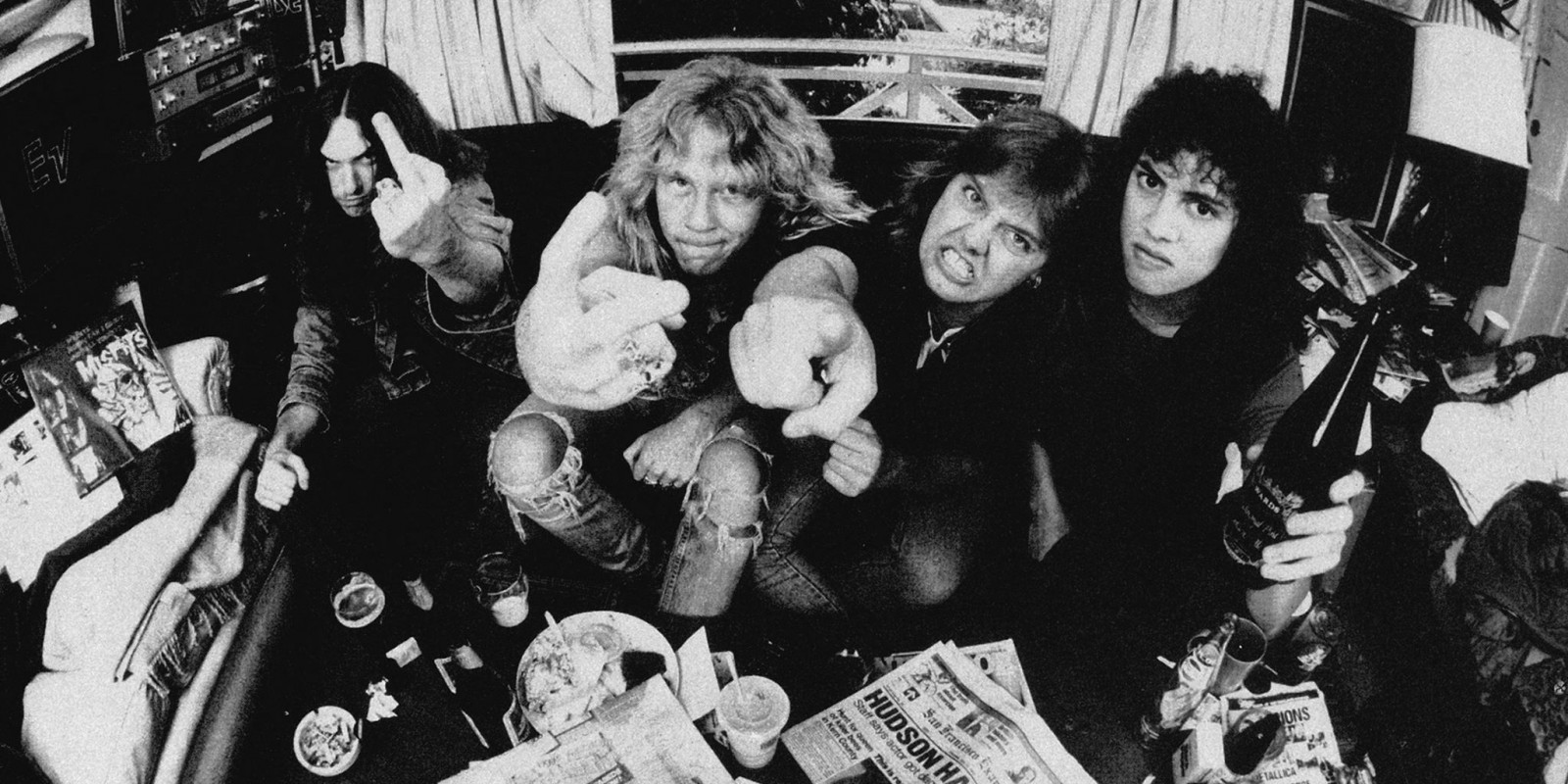 Thrash metal was born on the day Metal Blade Records released its first compilation mix album entitled Metal Massacre, which featured a demo by a then unknown Californian band that shook the heavy metal realm far greater than when Ozzy Osbourne bit the head of a bat in Iowa. It was Metallica’s ‘Hit The Lights’.

This demo — which was then corrected twice in the same year as frontman James Hetfield was unsatisfied with the initial version — defined the sound of thrash metal due to its healthy dose of structure, speed, groove, precision, and most importantly, it was heavy as fuck. It was essentially a sound that headbangers could not refuse to, well, bang to, and a formula that soon many bands that came after applied to their own productions.

Speed and heaviness were Metallica’s strongest traits from 1982 up until the early ’90s when a group of Cowboys from hell took over the town (RIP Dimebag). But this isn’t about the band that gave guitar shredding a new meaning or bands that rained blood, cried for the Indians, or questioned if there could be a price put on peace, no, this story is about a band that sought to destroy the world through their guitar riffs; the one and only, Metallica.

Metallica just recently celebrated the release of its tenth studio album — Hardwired… to Self-Destruct — which they are currently touring around the world for. Taking place in a couple of weeks, Singapore is one of the countries they are making a stop at as part of the WorldWired tour. So, fans that we are, ahead of the show, JUICE lists Metallica’s defining moments through each of their studio albums.

Besides being the pioneer of a genre that’s not suited for the weak hearted, Metallica are also masters of creating unforgettable guitar riffs. The evidence lies in the composition of ‘Seek & Destroy’; a song that needs no longer than five seconds to be identified and one that many headbangers regard as Metallica’s finest songs from their debut album.

The best way to identify whether a song was composed by Metallica is to pay attention to the duration of its guitar riffs. Like this song for example, it opens with a two-minute long riff before any trace of James Hetfield’s vocals can be heard, but this is merely the beginning of the many guitar wankage material that Metallica will serve up later in their career. Also, this song is one that no player of Guitar Hero should attempt to complete unless it’s a choice between the difficulty level of Easy and Medium, anything above that will potentially cause a player to lose their fingers or break the (fake) guitar.

We’ll be honest, ‘Welcome Home (Sanitarium)’ was a close second but ‘Master of Puppets’ won this round as the riff is one of the more iconic ones from Metallica (pre-‘Enter Sandman’, of course). This song discusses how illegal substances – the ‘master’ in this context – control the lives of those who abuse it (“I’m your source of self-destruction, veins that pump with fear, leading on your death’s construction; needlework the way, life of death becoming clearer, pain monopoly, ritual misery, chop your breakfast on a mirror”). Death is a prominent theme in the band’s work, and unfortunately, just a year after the release of this single, bassist Cliff Burton passed away from a traffic collision during a tour. Regarded as a legendary bassist in the genre, ‘Master of Puppets’ is Burton’s final piece of work while he was alive, with posthumous credits given to ‘To Live is to Die’ off follow-up album … And Justice for All.

Choosing a song that validates Metallica’s success during this particular period of their career is more agonising than having to comprehend why the Grammy committee felt Sum 41 was an eligible nominee for the Grammy’s ‘Best Hard Rock/Metal’ category in 2012.

It’s a battle between ‘…And Justice for All’, a 10-minute-long song that’s held together by a riff that’s beautiful enough of make any br00tal kid shed a tear, and ‘Blackened’, which features an opening riff that (if we were living in the world of unfair nominations) should have been given the Nobel Prize for Literature because it’s pure poetry. It will give anyone goosebumps, dammit!

But ‘One’ wins because it triggers the worst waterworks as it’s based on Dalton Trumbo’s fictional story Johnny Got His Gun, which illustrates the life of a soldier from World War I who becomes a prisoner in his own body after being hit by a landmine that cost him to lose his limbs and face yet still conscious (“All that I see, absolute horror, I cannot live, I cannot die, trapped in myself, body my holding cell, landmine has taken my sight, taken my speech, taken my hearing, taken my arms, taken my legs, taken my soul, left me with life in hell”).

The eponymous album — which is often referred to as The Black Album — is responsible for Metallica’s mainstream success; it was listed as the #1 album on various album charts for many weeks after its release, sold more copies than Michael Jackson’s Bad and Nirvana’s Nevermind, and is ranked as the 24th best-selling album of the last 25 years. Hell, it was even certified 16x platinum without any features, so, take that J.Cole. It churned out singles like ‘Enter Sandman’, ‘Nothing Else Matters’, ‘Wherever I May Roam’, ‘Sad But True’, and ‘The Unforgiven’. The only fact that’s needed to validate the greatness of this metal-ballad is that Metallica wrote two follow-ups (‘Unforgiven II’ and ‘Unforgiven III’) for its later albums to replicate the success of the original. No artiste creates a trilogy for a song that’s not well-liked… unless it’s Green Day. What were they thinking during the ¡Uno!, ¡Dos!, Tré! period? That’s a question that only Jesus of Suburbia would have the answer of.

When married couples become tired of their routine, they resort to spicing things up in different aspects of their lives in hopes of reigniting the passion that they once had for each other. That’s what the creative process for Load feels like; it sounds as though Metallica grew tired of having consistent successes and thought experimenting with hard rock would be a better route for the band to take. If only they knew that when Godsmack wrote ‘I Stand Alone’, it was because nobody wanted to stand next to them, and not because they were above anyone else. That being said though, with an open mind and a little bit of faith (after repeatedly asking why Metallica would you do such an atrocious thing), we found that ‘King Nothing’ is pretty tolerable, but it became evident that the listening experience with Metallica would not be as memorable as it was prior to this album.

If this song weren’t used as the introduction for Hot Wheels Turbo Racing, we would have overlooked it. What’s there to say about ‘Fuel’? It isn’t the greatest single they produced but it’s also not the (absolute) worst. This is probably the time many Metallica fans wished to time-travel back to the early ’90s just to advice them to quit while they were ahead. Bitter? Us? No way.

St. Anger is probably the lovechild of Metallica and Papa Roach. It feels like Metallica tried too hard to fit in with the mainstream rock bands of the mid-noughties when they really didn’t need to. Their lyrics were becoming less intriguing and their riffs had taken a backseat – but at least they picked the speed back up as heard on ‘Frantic’ and ‘St. Anger’. A fun fact: Harith Iskander and Afdlin Shauki used ‘Frantic’ as the theme song of their segment on Ah-Ha entitled Berita Rock Sentral, which was pretty epic, mostly because it was aired on Malaysian television and the two comics wore wigs.

‘All Nightmare Long’ sort of compensated for the lack of riffs and gripping-effect that Metallica songs were known to have; it had the two-minute long guitar introduction, there was a generous dosage of thrash metal, and the speed was back at its regular rate. It helped that Rick Rubin — aka one of the best producers of the last three decades — had joined on to be the band’s producer for this album. It definitely helped steer them back to the right direction.

After going on hiatus for almost a decade (which we’re sure was very much needed for the Godfathers of Thrash), Metallica returns with their tenth studio album last year. In its entirety, it is reminiscent of their work from the early years of their career — with ‘Hardwired’ sounding like it could be an unreleased track from either Kill ‘Em All or The Black Album. While Hardwired… to Self-Destruct doesn’t manage to hold our attention for as long, it’s still the best body of work we’ve listened to by Metallica since The Black Album, so we’ll take it!