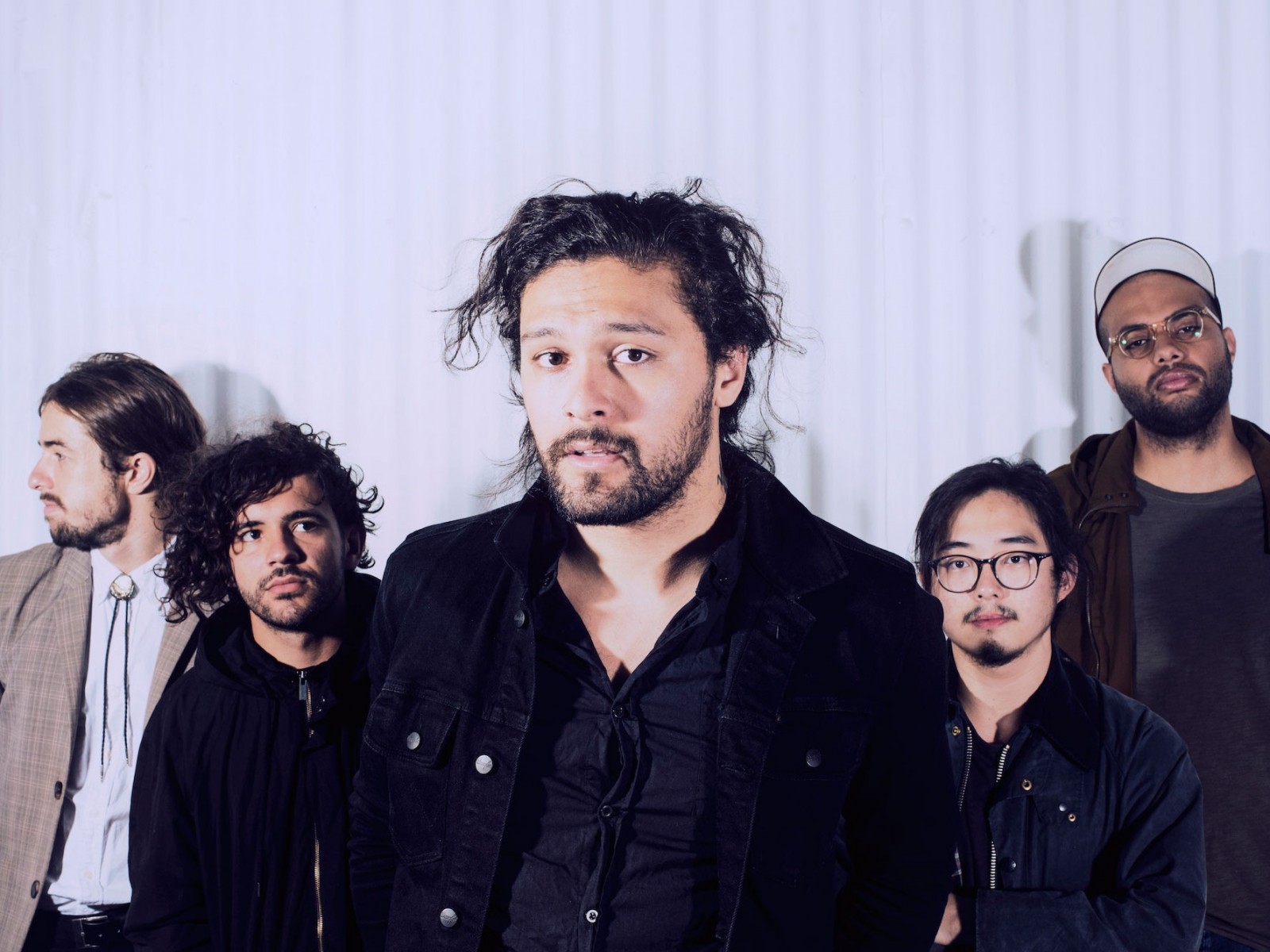 The essence of this five-piece indie rock band is their optimistic outlook that life isn’t as gloomy as their current obstacles make it out to be; which is a message that resonates well with most, seeing as people have the tendency to be consumed by present woes. Through their music, the band hopes to inspire their listeners to do more and most importantly, to feel less alone. A rather compassionate endeavour, and music – at the end of the day – does have a therapeutic aspect to it. Ahead of their show at Laneway Festival Singapore ‘17 in a couple of months, JUICE speaks to Gang of Youths’ bassist Max Dunn on creating music that gives their listeners hope, the beauty of being honest, keeping his sanity healthy, and his relationship with his bandmates – specifically lead singer/songwriter David Le’aupepe.

You mentioned in an interview that the relationship among all band members is similar to that of a brotherhood’s because of all that you have been through together. Describe that to us, please.
So, David, who’s the lead singer and songwriter of the band, he was in love with a girl who had cancer – Stage 4 melanoma – and married her. So, we immediately as a band, we were having our friend dealing with the illness of his wife and then a bunch of really sad stuff happened; they ended up getting a divorce and David tried to kill himself, which is where ‘Magnolia’ kind of comes from. Throughout that entire thing, the band kind of broke up for a little bit and everybody was trying to work out their lives – then it’s just like four years of touring around the world, the ups and downs of the music industry. Like, we were best friends before we started doing this, so that’s what I mean when I said brotherhood; we all have each other’s backs. We’ve sort of been through what would take a band 20 years to go through in like three years (laughs).

How do you feel about that?
I feel like an old man (laughs). I don’t mean that in a success thing – but if you name a terrible thing, Gang of Youths has probably gone through it (laughs). I think that in some ways, it gives us a lot of confidence and none of us have never really doubted that we could do this; make music that we believe in, make a difference. I think when you’ve had to overcome a lot of struggles, it makes you believe more and I think it helps us make music about hope ‘cos I mean, hope is everything. If people listen to our music and feel hope, then I think we’ve done a good job.

Gang of Youths’ lyrics are pretty dark, which were basically written based on plenty of challenging life experiences. How do you manage to keep your mind healthy and not allow past experiences define your current state of being?
You keep your chin up, be good to your friends, find people who you can trust and share your struggles with. Then, there’s real practical stuff like seeing a shrink if you have to – I’ve done that. There’s this thing in the world that you have to have your shit together and no one really does (laughs) – unless you do, then power to you. But honestly, get help if you need it and keep your friends close to you. These are intense questions!

JUICE is an intense publication.
No, it’s great! We shouldn’t have time for small talk [anyway, so] this is brilliant.

“I don’t care if somebody knows that I struggle with something in my mind, there’s no bravado, strength, or bravery in that.”

Thank you. So, many people have difficulties talking about their problems on a day-to-day basis, but you guys are essentially performing your issues away. What is it like from where you stand?
I think it’s cool. I definitely have a mental illness that I have worked through for the last five years since I was diagnosed, and Dave obviously had to battle his substance addiction and depression. Ultimately, it touched us all, really, so being able to share with people and taking away that stigma – who gives a shit? I don’t care if somebody knows that I struggle with something in my mind, there’s no bravado, strength, or bravery in that. Bravery is in sharing things and holding people up, and being real about where you’re at.

Do you think being this honest makes the band appear more vulnerable, like the image Drake’s lyrics have painted himself as whereby people immediately assume he’s an emotional wreck because of his songs?
I don’t really care (laughs), I’m just one guy, so I’m always hesitant to talk for my mates. What you do as a band is that you play the best show that you can, you make the best music that you can, and you’re going to be judged on that. I think people who love our music have been [taken by] Dave’s honesty – people who have gone through really tragic things have come up to us at shows and ask if Dave would give them a hug. There’s real power and honesty [in our music and with our fans]. If you’re making shit up, I think people can see through that. I don’t think people are going to look at five blokes who are best mates and think that we’re a bunch of wusses because we’re being real about who we are. If they do, tell them to come see me, I don’t care (laughs). If I ever read that about myself, I’d be like, “Ah, cool! Good on ya.”

“… you can’t really control how people respond to what you’re saying.”

Going back to the lyrics, it’s got a prominent human aspect to it, when do you know which ones to share first seeing as they’re from different life experiences?
It can be tough to be singing a song about a really tragic event from that time of his [Dave’s] life. We’d be in some bar in Brooklyn and no one there knows us, so, it’d be talked over it, you know what I mean? The songs won’t be in the moment that he’s in. As a guy delivering the piece to the art, I think that can be a real challenge, but I think we’ve got to remember some people are there [at a show] because they’ve taken like a bunch of pills and want to have a crazy time, and some people are there because they were really touched by your record and you have to give everybody a good show. We kind of try to make people feel as much as they can during our set, we try to take them on a journey, and David backs himself and people seem to buy it, so you can’t really control how people respond to what you’re saying.

When you first hear or read the lyrics that David’s written, is there a sense of heaviness that you personally feel seeing as these topics aren’t lighthearted?
Yeah, there is, there are some songs that are really meaningful – and when I’m playing them live, I’ll remember where I was when I first heard it. Whether that’s at Dave’s mom’s garage or some hotel room or whatever. For me, David’s like my best mate, he’s a wonderful guy that I drink a lot of beer with and go to the movies with, so when he shares a song, I kinda know the quirks and where he’s at. But that doesn’t make me sad, it inspires me more than anything.

Among all the songs that the band has produced, which one would be the one that reminds you of all your band members?
Oh man, that’s a good question – you ask some really good questions (laughs) – maybe ‘Sjamboksa’ [off The Position], because for me, it’s a Springsteenean-drive-off-into-the-sunset-with-somebody-you-care-about [type of song] and I think it’s the kind of song where you have to listen to everybody else that you’re playing with and really lock in. It’s very musical – it’s not the sort of song that you can get away with playing without caring about it.