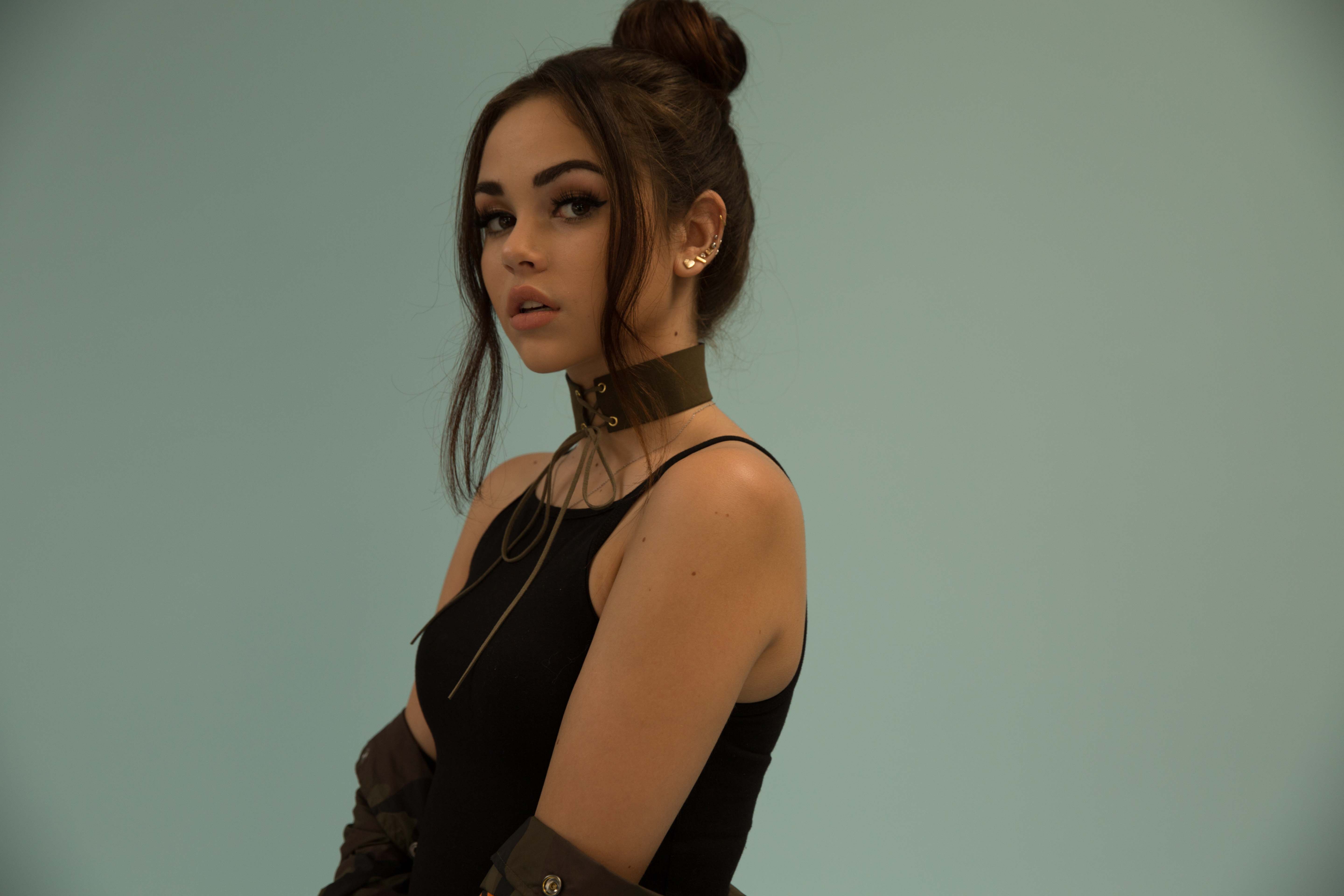 No stranger to controversy, Maggie Lindemann is making her mark on pop music by keeping it raw and unabashedly honest. The songstress from Dallas, Texas began her musical journey singing in the church choir at just four years old. In junior high school, she started recording videos of her singing and posting them on KEEK, developing a loyal following on all forms of social media. Her vocals caught the eye of Sony Music Marketing Strategist Gerald Tennison and not long after, Maggie was on a plane to Los Angeles to meet with the label. Fast-forward to 2017, and the 19-year-old singer is creating music she describes as “dark, sultry pop,” drawing influences from artists like Lana Del Rey, BANKS, and Marina and the Diamonds.

Her song ‘Pretty Girl’ — the follow-up to her debut single ‘Knocking on Your Heart’ — is an outspoken girl-power anthem where she sings about what it’s like to be a young woman in the public eye, and in the digital age nonetheless. JUICE sat down for a phone interview with Maggie Lindemann to talk role models, social media, and what being a teenager in the music industry is like.

‘Pretty Girl’ talks about how the complexity of being a woman reaches far beyond appearance. With an empowering message like that, do you see yourself as a feminist and if so, do you look up to any feminist icons?
Miley Cyrus would be my main one, I love Miley. I just really think that women are deeply underrated and that we can do anything.

Do you see yourself infusing your music with more of those kinds of views?
I don’t think I’ll do anything like that anytime soon because I did just come out with something like that. With my music right now, I’m trying to focus on what’s happening in my life, so it’s going to be more about personal things.

“I do a lot of positive self-talk to myself and that helps me a lot.”

Being an artist in the digital age makes it so much easier to gather an audience for your work. At the same time, it also means putting yourself at the mercy of online critics and trolls. As a public figure, how do you deal with the more negative aspects of social media?
I mostly try not to focus on them. I think that’s the best thing you can do, just try to ignore it. I do a lot of positive self-talk to myself and that helps me a lot.

How does your songwriting process usually go? Are there any musicians, or maybe even authors or filmmakers that drive the creative process of your work?
With me, I’ll work with the writers and producers on a song. We’ll come up with an idea based on something that I’m going through, so we’ll look through my tweets or my Instagram posts. Anything that I’m going through, we’ll come up with song ideas from that and bounce them off of each other.

Cheat Codes and Cade, Taylor Wise, and ‘Ye have all given ‘Pretty Girl’ the remix treatment. What kind of importance does ‘the remix’ hold when releasing a single in the music market today?
I think that remixes are cute, people love that kind of music. When you release a single, coming up with a remix is super beneficial especially if a song is just purely pop. A remix just adds that little bit of dance and spark to it.

Did you handpick the artists that did the remixes or was it more of a label decision?
It was both; [the label] talked to me about it and then we all came up with a decision together. I love everyone that I’ve worked with, they’re all-amazing and super talented.

The music video for ‘Pretty Girl’ has drawn praise for portraying queer girls (specifically queer girls of colour) in a humanizing and positive light. What drove the decision to include that narrative in the video?
[The music video] is about girls being torn down and not treated as equally. I thought that having that in it could give girls something that they could relate to. It’s all about being equal and that’s what I wanted to show in the video.

“[Being a musician] was something I’ve always wanted to do, so leaving and following my dreams wasn’t that hard.”

You moved from Texas to Los Angeles to pursue your musical career, and you were home-schooled during the time you spent recording and writing music in LA. Those were quite major life changes to deal with. How did you acclimatise yourself to that new routine and lifestyle?
I’ve always wanted this lifestyle, so for me it wasn’t super difficult like everyone thought it was. Leaving school was pretty hard for me. I had to leave home to move to a new school in a new city, and it was really hard going from that to [having to leave school] again. But overall, this was something I’ve always wanted to do, so leaving and following my dreams wasn’t that hard.

When you look back on your musical journey, what were some of the biggest challenges that you had to overcome, and how does that shape who you are, both as an individual and as an artist today?
Being in the music industry, I wasn’t used to the way they worked and having to get up and go if they told me to. Everything I do now has so much more impact, so I have to be more careful of the things that I do. Everything is way more monitored now, which has been really amazing for me because it’s forced me to grow up and be more mature.

Besides music, where do your other passions lie? Do you ever see yourself venturing into those fields?
I love to act, but right now I’m definitely focusing a lot on singing and I don’t really have a lot of time for anything else. I love to explore and hang out with my friends, anything a normal teenager loves to do.

“… the other music that I’ve come out with is pretty sultry and more dark. I think that style is what’s different from stereotypical pop.”

Your music has been described as ‘alternative pop’. What do you think it is specifically about your musical style that sets it apart from the sounds of mainstream pop today?
It’s a little more sultry. ‘Pretty Girl’ is quite pop, but the other music that I’ve come out with is pretty sultry and more dark. I think that style is what’s different from stereotypical pop.

Do you see yourself sticking with that kind of style for the near future or are you looking to dip into other genres?
I think I’ll just do whatever comes naturally to me. Right now I’m focusing on sultry pop music, but who knows, it could always mix up.

Stream and check out the music video for the Cheat Codes x Cade remix of ‘Pretty Girl’ below: