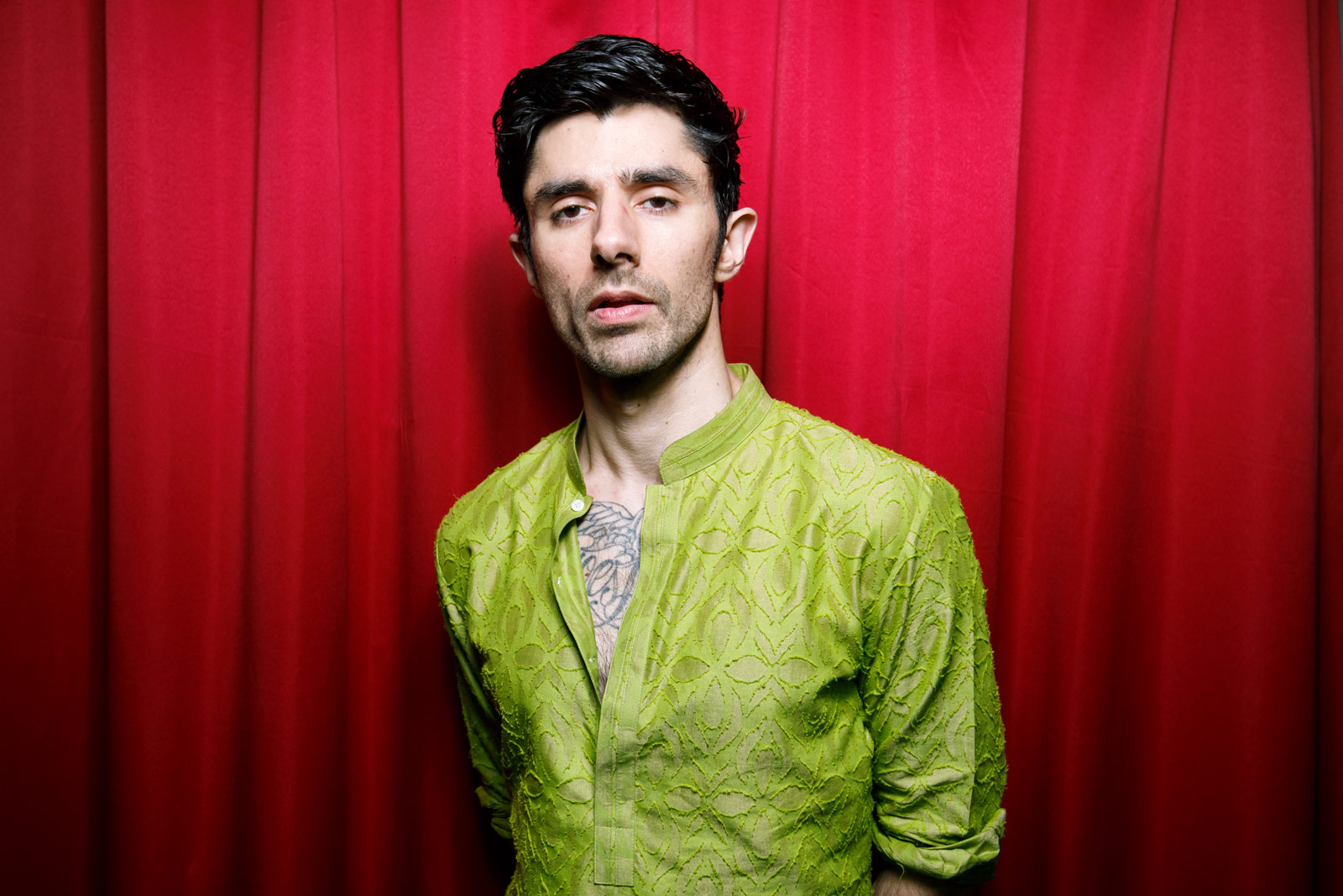 Niles Hollowell-Dhar, better known by his stage name KSHMR (pronounced “Kashmir”; sometimes stylised as KSHМЯ), is an American DJ, record producer, and musician from Berkeley, California. KSHMR was a part of hip hop production duo The Cataracs before disbanding it and diversifying himself into dance music as a standalone artiste, one that’s brought him much more success. JUICE managed to catch up with KSHMR just hours before his performance at Heineken Live Your Music last Saturday, consequently, we discussed storytelling in wordless instrumental music, his thoughts on Trump’s attempted ‘Muslim ban’ as a person of colour himself, and the one lesson he’d love to take from another musician.

So KSHMR, this is your first time in Malaysia for Heineken Live Your Music. How excited are you?
I’m really excited about the show. I’m friends with a singer from here – Yuna. We’re under the same management and I really just heard about Malaysia from her and it’s been interesting to see it first hand – and it’s a beautiful city

Your real name is Niles Hollowell-Dhar. So, what’s the inspiration behind the stage name KSHMR?
Well, my dad, he immigrated from India to the United States and my lineage is Kashmir on my dad’s side of the family. I was raised being told by my grandparents that I’m Kashmiri and in my youth I didn’t take it very seriously, but as I got older, I started to think more about my heritage. So in short, I’m Kashmiri.

“I was done with The Cataracs’ sound and needed to breathe new life into my creativity, into what I was doing as an artiste and I experimented with dance music. At first not taking it too seriously, but found a real passion for it.”

You started out as part of hip hop duo The Cataracs and produced hits like ‘Bass Down Low’ and ‘Like a G6’. How was it like for you to transition into KSHMR and rediscovering your own voice as an artiste?
It’s been great. To be honest, I was coming to a point where I was done with The Cataracs’ sound and needed to breathe new life into my creativity, into what I was doing as an artiste and I experimented with dance music. At first not taking it too seriously, but found a real passion for it. And with everything I learnt from The Cataracs, I was able to craft KSHMR just the way I wanted to. Having experienced some good things and some bad things with The Cataracs, I knew what really worked for me as an artiste.

Is there any musical piece that you feel most proud of and why?
I think Jammu because of the song [and] also of the video.

Your most recent EP, Lion Across the Field, has a storytelling theme and uses Indian cultural music elements. Where did the idea of merging those two come from and how was it to arrange them for a larger scale of consumers beyond its ethnic origins?
I think my taste are in line perhaps not with the mass public, but with a certain group of people that end up being my fans and when I use these world instruments – some of them are Indian, but to generalise I would say world instruments – if I can incorporate them in a way that sounds good to me, then I have faith that there is some group of people who’ll like it.

I don’t calculate too much as to how digestible it will be on a large scale. I just trust my instincts. I have an inclination towards worldly instruments because they’re just more exciting than using the same synths over and over again and that is sometimes one of the creatively limiting things about dance music. Synths are all based on a triangle wave form or a silent wave form, and you can do a lot with it but you can’t create the sound of a flute struggling, which requires wind and that’s almost a human quality that it has; it requires you to breathe into it to make a sound. And that introduces confines about how long you can blow a note or how quickly you can switch between two notes, it’s not instantaneous, just like the human voice.

Just like autotune, which everybody knows about the autotune effects when you hear it, but if you look at what it is actually doing, it’s switching between one note to the next note instantaneously – there is no bend and there is no vibrato typically. Those are electronic machine qualities that are inherent to synths and you can break out of that and introduce something human when you start using instruments that have a little bit of struggle with them like the flute that requires air. In that way, you can put more soul into dance music.

“Nobody thinks back on great leaders in terms of whom they’ve banned. You don’t leave a real significant impressive footprint on history by banning people – you open doors.”

So you mentioned that your father is an Indian immigrant, with the politics now in the US, and Trump’s attempted ban on certain countries, what are your views about the country now?
I think history always looks back favourably on movements towards tolerance and open-mindedness, creating a society that cares about all people. You saw it with the Civil Rights Movement, suffrage for women’s rights, gay marriage. At one point gay marriage was very politicised and on one side of the aisle people needed to oppose it to cater to their party. But now that it’s more accepted, nobody cares about it that much, nobody is still fighting over it. Now that it is accepted, people move on, it’s not a political hot issue and this goes to show that with some of these issues, the people opposing gay marriage, they don’t even really care. We’re now open to it in America and it’s a fight they lost, so they just dropped it. It doesn’t serve Republicans politically anymore. And there is this ban, but history is not going to look back favourably on a ban against people. Nobody thinks back on great leaders in terms of whom they’ve banned. You don’t leave a real significant impressive footprint on history by banning people – you open doors.

To you, what is the most important element in music making or what is the most important thing that an artiste has to be aware of when being creative?
I think at the root of all good art, is a story. Any good artiste has a story that gives context to the music. The songs don’t live in isolation, they don’t live in a vacuum. They come with a story of who the artiste is that’s delivering it. It all makes sense when you get a feel for that, so to make that sort of lasting impression on people, real thoughts have to be put into the story of you, and also on the individual scale, the story of each song. I think in dance music, it’s often overlooked that you can tell a story although there are no words, you create the music, instrumental dance music, with a story in mind, you will produce with such a conviction that it will be heard by people whether or not they literally understand the story that you wrote in your mind for that song. That conviction and that imagination will be heard and it will be felt.

Recently, you brought your grandfather on stage to pay homage to your grandmother at Sunburn Festival India. So, family must be very important to you. Tell us, how do you maintain or balance relationship with family and friends while constantly travelling and working?
Well, ironically there are more ways to stay connected with family, but it’s also true that sometimes we do it less and less. I think you just have to not take it for granted because that is something so often we do with our family. You have to make it a habit to remind the people that you care about that you care about them and that you’re interested in how they’re doing and you’ll feel better about it. It’s a habit that I didn’t have but I think I developed more as I got older because months will go by and it just feels really bad, and I would suddenly wake up and realise I haven’t talked to my mom or my dad or grandpa. I think that slowly occurs to you enough times that you just start making a habit and I’m still not the best at it but with the travel, it’s just so overwhelming that you just can’t wait to be by yourself. The last thing you’re thinking about is reaching out to people and having a phone call. I just so often want to plant my face into the bed and knock out, but I do try to make an effort.

You also have been holding seminars and hosting LESSONS FROM KSHMR. If you could go and take lessons from any artiste, who would it be and why?
Interestingly, Hans Zimmer, who is an incredible film composer. Recently, he did Inception and Interstellar. He just released a masterclass online, which I am currently watching. There are also artistes that I would like to learn from that maybe – I think – wouldn’t be a great teacher, but Kanye West is someone that I wanna hear from. But I don’t think anyone really can sit and listen to what he says, as his style is on the spot, explosive, and just genius.

You recently tweeted a post on instagram, a video with the caption “Making new music.” Any news on when this snippet will come out as a full song?
Well, I am working on something but mostly my post was just to tell my fans that I have something cooking. But it is far from release[-ready] and there is still work to be done.

Listen to Lion Across the Field EP below: