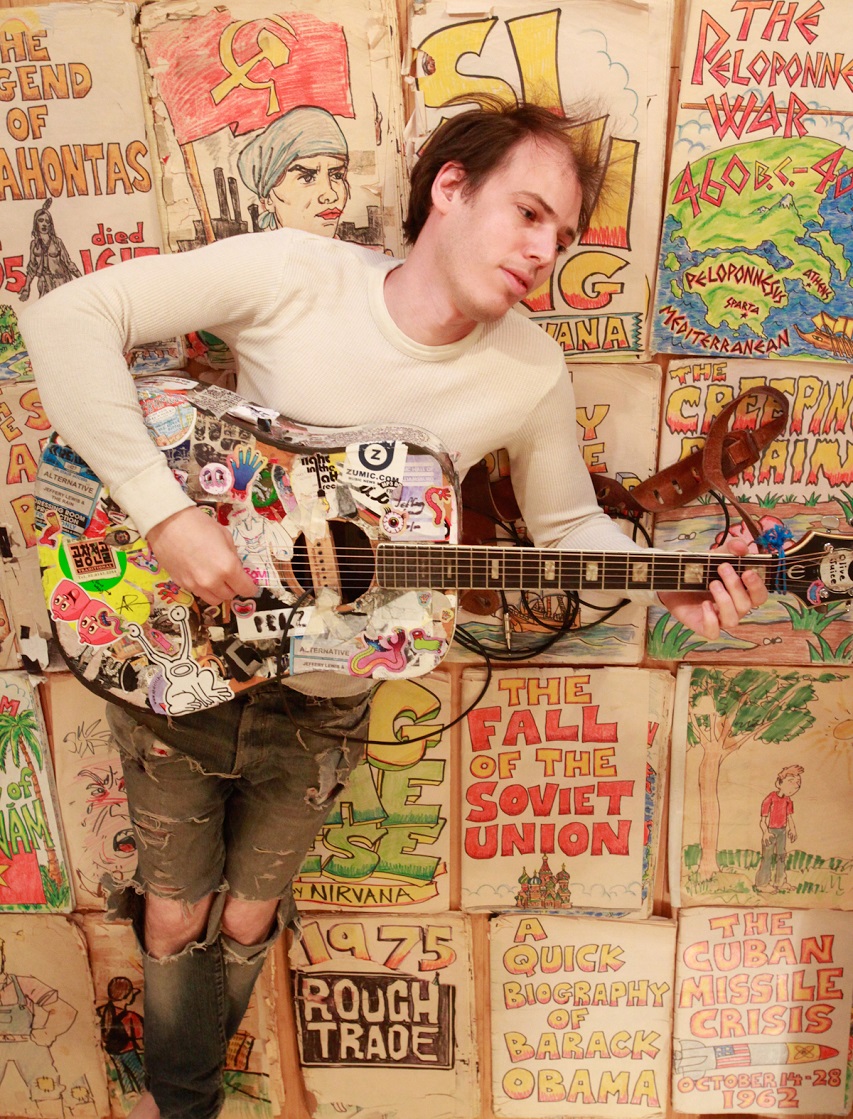 It’s likely that you’ll find Jeffrey Lewis and his band (currently The Jrams) sleeping in budget hotels or on floors of fans while they’re on tour. And yet, it’s not uncommon to find rave reviews of the singer-songwriter and comic book artist who emerged from the late-‘90s anti-folk scene being featured in ‘tastemaker’ mags and websites. Raised by beatnik parents in New York City, Lewis has always been a strange creature and a fixation to those familiar with his vast works. From his self-penned-illustrated comic book series, Fuff, that depicts his early life as a backpacker and later as a travelling musician to his wordy, seamless music as a solo artist and with numerous outfits [Jeffrey Lewis & The Junkyard/The Creeping Brain/The Rain, The Bundles (with Kimya Dawson) and more]; it is evident that Lewis is not a typical rock musician concerned with making it big. Signed to Rough Trade, Lewis is on the heels of his 7th solo studio album (out next month). With that in sight, he makes his maiden voyage to Malaysia to perform at The Bee, Publika tomorrow Monday 7 Sept. And today, right after he arrives and freshens up, Lewis will give a free talk at The Square, Publika on how to draw comics! JUICE sends a quick email to Lewis… in which he replies in less than 24 hours…

What was it like growing up in New York City with beatnik parents?
When I was a kid I was frustrated because we didn’t have a TV and I wasn’t allowed to play with war toys, but I loved the neighbourhood and all the weird neighbours, you knew everybody on the block, all the drunks and drug dealers and hippies and musicians and magicians.

How is the anti-folk scene doing these days?
There has never been much of a “scene”, ever since I started playing in 1998 it has mostly just been the tiny Sidewalk Cafe open mic nights that sort of defines the “antifolk scene” in New York City, it’s not any bigger than that. But it still goes on at Sidewalk, in fact I just played at the Summer Antifolk Festival that they do at Sidewalk every year. It’s a very small scene but it has been going for a long time. When the Moldy Peaches started playing there in 1999 they became very successful but the rest of the scene has stayed about the same, some people move away, some people become more successful and stop playing at Sidewalk, but there’s always new people and it just goes on. Anybody can come and play there, so it’s always full of people starting to learn how to write songs and play shows.

There have been several attempts to make a Jeffrey Lewis documentary-feature. What makes it hard to capture your essence?
There have been about 5 different documentaries that never got finished! One from France, one from England, one from Germany, one from California, one from New York, all of these people get the idea that it would be cool to make a documentary about my band, and some of them even worked for years on their projects, but I think I’m a difficult subject for a documentary because there’s no real story… I have no beginning, middle or end, I just continue on, making comic books, making songs, trying to book tours and trying to continue in my own strange way. Nobody was there to film me at the beginning, and so far there has been no “end”, because I have just been going at a similar level for so long, it’s been 15 years like this, booking my own tours, finding musicians to play with, dealing with Rough Trade, publishing my comic books, all of these things. It’s probably not very exciting to film it. It’s just a lot of driving, and a lot of emailing, and then the creative part is not very interesting to film either, just me sitting at a desk trying to draw a comic book, or me sitting with a notebook trying to write a song. I think the comic books and the songs are great, but the process is not very interesting to look at, maybe! There are no big fights, no big parties, no big rock and roll drug scenes, no rehab, no overnight success, it’s just a long strange life.

Your current band has been through several bass players. What kind of commitment does it take to be in a band like The Jrams?
To be in a band like this you have to be the right combination of crazy and not-crazy. You have to be crazy enough to do this crazy traveling, and do all this work, but you also have to be very responsible, you have to get to the airport on time, you have to get enough sleep, you have to learn a lot of words and songs, and learn how to drive cars in all these different countries on different sides of the road, and learn how to deal with calculating different currencies and figure out how many t-shirts to carry on a tour, things like that. If you love touring like this, it’s a great life. A lot of fun, plus a sense of accomplishment because we do it all ourselves, we don’t have to travel with a manager or driver or anybody telling us what to do. But only a special kind of person loves touring.

Why do you have so many backing bands? Are they backing bands or would you credit them as co-creators?
I write the songs, but there’s always an element of creative collaboration when working out songs and arrangements. I would prefer to just stay with one bass player and one drummer, but I can’t control people’s lives, people move away from New York City, people get married and have kids, people get other jobs and stop playing music, so I have to always find new bass players and new drummers. In some ways it’s good because it keeps the band sounding fresh and interesting and raw, having these different voices and styles and personalities. Right now the bass player is Mem, she’s 21 and she’s really excellent, she’s been touring with me for just a couple months, I hope she stays in the band for a while. Heather has been drumming with me for two years but she’s leaving next month for a different job so I have to find another drummer for my November and December tours. It’s hard to have the time to keep finding new people and teaching them 100 songs, but what else can I do? Sometimes I tour solo, sometimes I tour as a duo, sometimes even with a 4-piece or 5-piece band, but the best is usually just a 3-piece band, with guitar, bass and drums.

You have six solo albums, your own comic series, numerous music and art collaborations… Will all these works somehow connect to reveal a hidden narrative one day?
I think there’s probably a connection, there are some philosophies or a certain kind of personality that can probably be found in all of these things.

How did you keep a strong fanbase and stay relevant despite all the changes in technology and pop culture?
I really don’t know, it seems impossible to me, but it always seemed impossible even when I was just starting. I never had ambitions, I just wanted to make songs that felt powerful to me. I put the best songs onto tapes, and I figured that if other people connected to them, maybe it could just spread from person to person. I was mostly inspired by Daniel Johnston, the way he made tapes of his songs in the ‘80s and people would just pass them on and dub them for other people because the songs were good. So I basically just keep doing that, even though the technology keeps changing.

Have reviews from tastemakers like Pitchfork and Guardian helped your career?
Well, Pitchfork has always hated me, but the Guardian seems to like me. I don’t know if any of that stuff matters.

Do you ever feel like you’ve invested too much into art and music to stop making it?
Oh definitely, I’ve been making comic books my whole life, it would seem so strange to stop, I don’t know what else I would do.

Are all the stories in your comics (for the ones about yourself) true to the events that actually happened?
For both my comics and my songs, I always say that the ones that seem true are true, and the ones that are obviously fantasy, like about mutants and outer space and talking animals and stuff, are obviously fantasy. It’s pretty easy to know which of my comics and songs are true and which ones are fantasy! I think I never try to trick people.

You have a self-deprecating sense of humour that comes out a lot during songs and comics about woo-ing women. Has the commitment of being an artist ever gotten in the way of your personal life?
It’s very hard to keep a normal relationship when you are always leaving home to go on tour, it’s hard to find a good balance. I don’t know what to do about that. I mostly try not to go on long tours, a maximum of three weeks. But sometimes I have to do a four week tour, or longer.

Do you ever feel uncomfortable revealing intimate details in your comics?
Sometimes, but every artist has to decide how brave or how stupid to be when you’re trying to show a certain truth about the world or a certain philosophy about the world. It’s your job, whether you make fiction or non-fiction. Art sort of has no mercy, really. Van Gogh had no mercy when he made you see a tree the way he wanted you to see it.