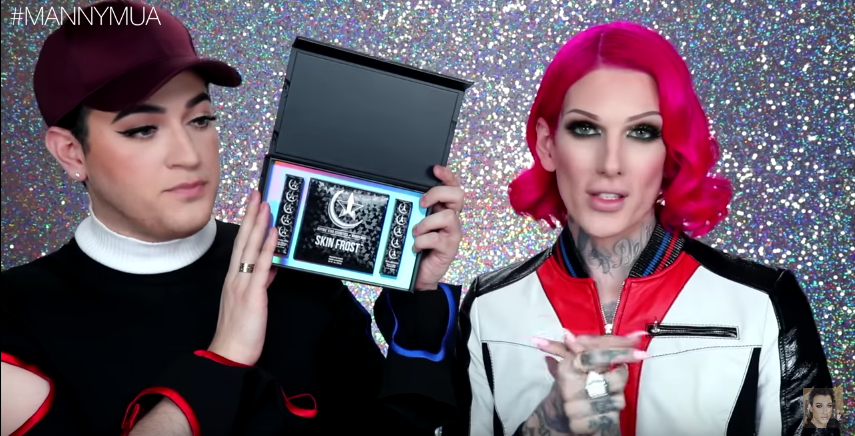 In the world of beauty YouTubers, belong two powerhouses, Jeffree Star and Manny MUA, who have collectively built a reputation (both good and bad) for themselves in a female dominated industry. To add into their list of achievements, the two have teamed up for a special collaboration that features a black cover with Jeffree’s ‘star’ logo and Manny’s holographic crescent moon. Unfortunately, the highly anticipated product collaboration was met with a lawsuit by another company called Black Moon for trademark and copyright infringement. Initially a brand known for its black packaging and holographic crescent moon, Black Moon representatives claimed that the use of the particular design was introduced by the brand and therefore, is seeking to end the sales of the product as well as attorney and damage fees. Manny MUA has also released a collaboration item with Makeup Geek using a similar logo design, previously expressing his admiration for Black Moon’s packaging via Instagram Direct message.

This isn’t the first time these two makeup divas got caught in a tangle. Jeffree Star is a controversial figure for his online feuds, particularly one that involved former-friend-turned-enemy Kat Von D. His most recent Twitter debacle was with a customer who complained of hair embedded into her Jeffree Star highlight, to which Jeffree referred to as “cyber-bullying.” Manny MUA however, has had to apologise after being part of a Snapchat video with owner of Gerard Cosmetics, who called beauty vlogger Karina Kaboom “ugly.”

Watch the big reveal down below:

We’re unsure if the lawsuit caused any delay on the launch of these products, but stay tuned for updates here.