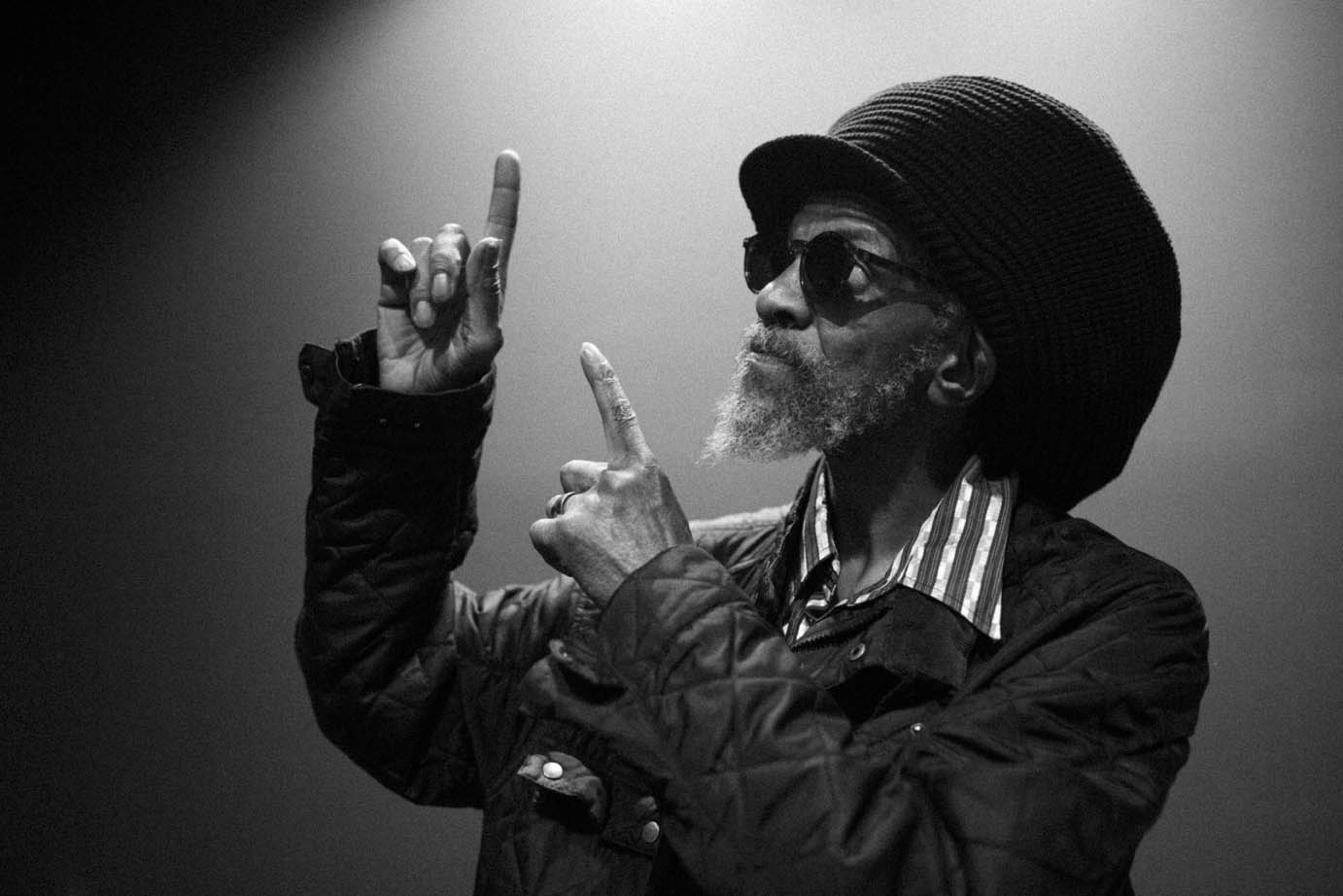 Perhaps the greatest sin committed by the dance scene today, in certain parts of the world at least, isn’t its perceived dwindling quality. That point is infinitely arguable. Instead, it’s the lack of attention paid to sound on a more obvious level – not the technicality of composition, not the how of the music, but something more basic; the sound system with which these tunes are amplified on. Jah Shaka was one of the pioneers of sound system culture, a Jamaican subculture that was brought to the UK during a tumultuous time in their migration history. Any of the genres that branched off dub you pay allegiance to right now owe the seemingly immortal Rastafarian an invaluable debt. Shaka’s lecture during Red Bull Music Academy 2014 in Tokyo was expectedly an erudition of the importance of audio – from trajectory and acoustics to the effects of potent bass on a biological level to aural spirituality. JUICE had the rare opportunity to converse with the living legend, and filtered through the Jamaican-inflection of the man’s Ent-like pace of speech were the words of a godly man whose testament was less proselytising and more universally positive.

Thank you for giving us the opportunity to talk to you. It’s already a pleasure to attend your lecture! To start our own little session – we’re not sure if it’s a rumour, but we heard you actually dislike standing on stage when you play? You’d rather be with the crowd, in a circle of people.
Yeah. Mostly with our sound system when the crowd is around us, we feel energy from fans, feel energy from the crowd. We like to do that. In travelling, sometimes better on stage, too much people, too near. So, sometimes abroad it’s better to be on stage although we like to be amongst the people. But when you’re with people who don’t understand you, you have to first balance it out. When they know you, then you can be near them.

You’ve been to Japan quite a lot…
Japan… about 17 years. I’ve been to Australia… tour in Israel, Germany, Italy. So many countries! Nonstop.

There’s another rumour we would like to check if it’s true. Was there one show where the lights were so hot that your dubplates melted and you walked off stage?
No, rumour! (Laughs)

“How you live with people – that is religion.”

When you’re a legend, there are many rumours. Music is very spiritual to you. What about people who don’t believe in religion but when they listen to your music, they find themselves getting lost in it. How does that work when you don’t believe but still find the music ‘spiritual’?
What we are doing is planting seeds to grow. So when you hear something, you go into the community and practise. It’s good. And then you get to believe after. When people tell you, “You are a good man,” people say, “You are doing well,” [it’s] so you will know that you are doing something good. Whether someone believes in the beginning, they will believe eventually because of feedback from people. You have to know that when you’re playing [the] keyboard and you play a wrong note, you have to know that the note is wrong! [It’s] not good note… so religion – religion to us – is a way of life. How you live with people – that is religion. Love, respect others, help the sick, help the poor – people under privilege, help them. And whether you know or not, you are looking for God! Whether you know or whether you believe or not, it’s good.

Japan has a strong reggae scene. Even huge sound systems…
Mighty Crown [comes] to England sometimes, I see them.

Why do think the reggae sound is so big in Japan?
Influence. Jamaican artistes come to Japan. Great artistes. People recognise importance of legendary singers. People recognise [their] importance. So many bands in Japan at [Fuji Rock Festival] – ska bands! Playing Jamaican ska. [They] practise what they see in Jamaica. Someone would be in Japan and is like Miniman, or like Sizzla. Y’know, Japanese people produce lookalikes, whether [they’re] watches [or] shoes – they do it in music too. They can copy.

Speaking of which, sound system culture is so indebted to the migration history in the UK, so when other cultures like Japan adopted it, do you feel like something is lost?
No, it’s good because when I played in London and a Japanese crew from Orange Street came, four or five [of them], to Shaka[‘s show to] dance, people went, “(Gasps) Japanese! Coming to listen to Shaka from Japan!” And [it’s the same with] people from Germany or other countries with three, four people crew – fans would look seriously at this. These people [came] from so far! They come to England, some of these Japanese roots ambassadors from Fukuoka and Nagoya. People come to London with big shows, even sometimes they keep the UK dub [sound] – sounds come from Japan, sounds come from France, sounds come from Germany. So, big meeting, big respect for others to take work and do work. Good. Good for the business. You don’t have to be there, [now] other people can do. You teach students.

“Shaka collected hits first. Hits that mean something to people.”

Do you have much contact with other music genres?
Many in Jamaica. What other music? Like soul? Well, we used to collect these records, some are Motown, and all these records we collect to know about music. Curtis Mayfield, Isaac Hayes, James Brown, Marvin Gaye, Michael Jackson, even the Beatles! They make songs, ‘She Loves You’, was [a big hit] in London. Shaka collected hits first. Hits that mean something to people. But over the years, no party [music] now. Message. Not just dance, happy. Message. And we try to incorporate [the] Bible in the music.

“Some people have bombs, we have music.”

At this age, is spirituality the only thing you wanna espouse when you make music or is there other topics that are more specific?
That’s the topic! To talk about God, to talk about doing good things, to tell people, “You have a talent,” “You have a skill.” To tell people that they can find something in them. To give them a chance, hope. Because the guy making graffiti on the walls, he might be [the] next Van Gogh if he [gets a] manager. You understand? Sometimes people have lots of talent, but no good money-paying job. Sometimes no good Prime Minister, sometimes no good politician to help. So, music spread your message because no one speak[s] for you, you use music to speak. Some people have weapons, we have music. Some people have bombs, we have music.

Is this because when you just started out – the sound system culture was also from the poorer part of the community — you didn’t have people to tell you all that but you started something of your own?
Yeah. But we grew up in the church. We study about God, what God wants people to be like, how he wants them to live. First, you study about God – find out. First thing he said to me, “Be an ambassador.” So you be [an] ambassador. Not to play with other sounds in competition anymore. No competition. Spread message. No competition.

This is what you referred to as the Testament of Dub then?
Yes, I would say that. It is a testament in itself when you make music, all this music is [a] shakedown! Down, down. Take out, this take out, that take out, this take out. You only have the drum and bass. Backbone. In Jamaica, first time music, only drum, bass, piano. When Shaka recorded, one take, first time, singer sing[s] here, bongo drum here. One mic, one take! So you have to be good!

Sometimes they cut it straight to the vinyl? No tape recording?
Straight! Being in a studio in Jamaica you have to know studio time [is] too expensive. “Oh, let me try again.” No, no, no. Be [a] good musician, (mimics sound of cymbal) done! (Repeats) Next song, (repeats) next! Very quick memory of [a] musician and ideas. So, when somebody like Don Drummond came to Studio 1, he got his own ideas to give to this studio. Like when I came into Sound System, I had my own idea of what it should sound like. So everybody is individual to their ideas, it matters how [you express]. Expression!

“In the early days, no chance to put laptop and piano and say ‘Oh, wrong piano, do again.'”

Do you think that today it is too easy for people to make music? And does that affect the music?
It is very easy. Laptop. It is very easy. In the early days, no chance to put laptop and piano and say “Oh, wrong piano, do again.” No chance in Jamaica, time [is expensive]. It has to be good. Some tunes, even some tunes were out of key in Jamaica, no one notice[s].