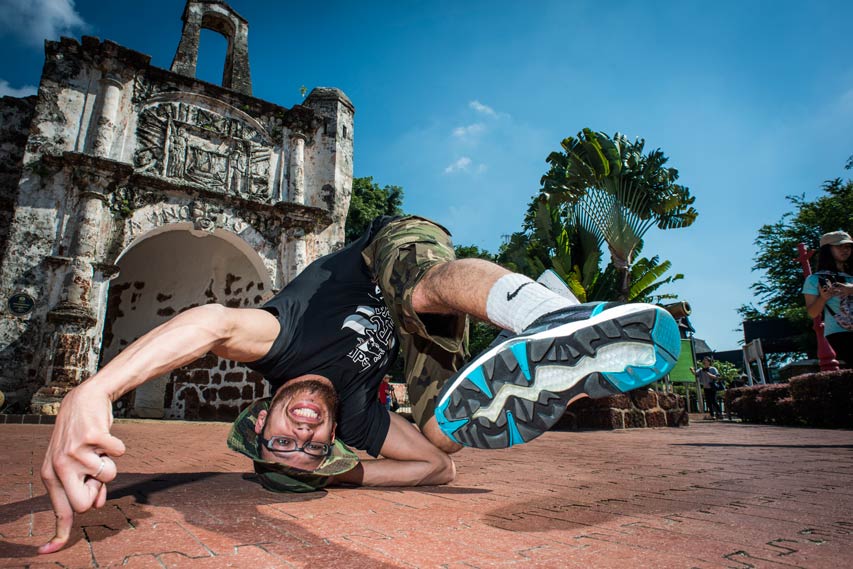 Ali Ramdani – better known as Lilou in the b-boy scene – is of Algerian descent and currently resides in the land of baguettes, wine, and perceived rudeness – that’s right, France. Ali began breakdancing when TRL and trucker caps were popular, but he didn’t just wake up one morning doing air flares, windmills, and headspins; it took hours of practice, determination and discipline. JUICE caught up with the two-time Red Bull BC One champion about choreographing for Madonna, the Muslim experience in the West, and being a warrior – lighthearted topics, obvs.

We’ve seen a lot coming from France, but as someone who grew up there, what’s the dance scene like there?
It’s one of the biggest in the world. The dance culture is big and you’ve got everything from classical dances like ballet and ballroom dancing to something like breakdancing. We have many suburbs and ghettos in France that are influenced by hip hop in general – graffiti, rap music – and since this dance (breakdance) is part of the hip hop culture, it should come as no surprise that it’s popular here. You can find crews and dancers everywhere! And what I love about it is that it started as being something small and it’s developed so much over the last few years.

B-boying isn’t covered that much in modern hip hop; what do you make of rap music today?
What we see on the television screens is not the best — it’s not the real hip hop for me. Hip hop is where you share knowledge and peace, but these days we see rappers [basically] saying “I have cars, money, and girls,” and that’s not hip hop. Although I listen to that kind of hip hop because it’s catchy, it’s not the real hip hop of our hearts.

Living in Asia, perhaps we can’t quite relate to it, but why do you wear a t-shirt that says “I’m Muslim, Don’t Panic” on it?
It’s a symbolic shirt. Living in Europe as a Muslim can be exhausting because of the politics. They (politicians and the media) put too much light on the wrong way of the Muslim people and they never talk about the good side of us; it’s always the bad and that’s not the real religion. Each person in the world has good and bad in them, and I want to show the good path of Muslim people. I have two cultures; Algerian, which is the northern part of Africa, and French, and I’m a Muslim that loves dancing. So don’t judge me.

Coming from a culturally diverse background, which do you relate to the most?
That’s like asking me which parent I love more. You learn stuff from both of them — I am who I am because of these cultures. Algeria is only two hours away from France — people think it’s really far but it’s not.

What have they taught you though?
My religion… Algerians are warriors and proud people of what we have and who we are and that mentality has pushed me to where I am today.

What was it like living in France after the Charlie Hebdo incident?
My life continued. This happened in Paris, yes, but how many things have happened in the US? People going into schools and shooting kids, and what do people say about that? (Smiles)
Stupidity and terrorism have no religion but because we are Muslim, they’ve stereotyped us in such a way and the media chooses what to highlight.

Maybe we’re veering too far into serious conversation here… going back to b-boying, aside from being a two-time Red Bull BC One champion, what’s been the highlight of your career thus far?
There was a competition called Undisputed in London; it’s the first of its kind and it brought eight champions from eight of the biggest competitions in the world to battle with one another for the Undisputed Champion title. Two days prior to the event, I had injured myself and two weeks before that, I was eliminated from the first round of Red Bull BC One, so I was disheartened and didn’t think the odds were in my favour but being an Algerian guy, I was proud and determined to go – and I won!

You toured with Madonna. How did that happen?
It was new for me to work with a huge artiste like her but I learnt a lot from this experience. Madonna is very particular about details, so everything had to be perfect and super professional. I didn’t really care if it were Madonna because I’m not a fan – she’s a big artiste and I’ve tons of respect for her but it was just another contract for me. If it were Michael Jackson, Tupac, or Jamiroquai, it’d be another story.

What’s the meaning behind your moniker Lilou?
In Algeria, if your name is Ali, you call him ‘Ali-lou’ while he’s young. It’s like a cute nickname that just stuck with me throughout these years [even as an adult].

You have a huge following. What’s the oddest thing a fan has done to you?
I’ve gotten marriage proposals and gay guys hitting on me. One of the craziest moments that have happened; I was in Capo Verde, an African island, when a guy who was walking towards me started shaking and then proceeded to grab me and hug me. He was a fan and never thought it’d be possible for him to ever meet me because he lived on an island but there I was, walking on the street, which he lived on. I could see in his eyes that he was ecstatic and it’s moments like these that make me proud of who I am and I stay humble by praying and staying close to my family.

Any advice for aspiring dancers?
Be free and be you. Sometimes you’ve to climb a hill to be where you want to be but take your time and don’t rush to be on the top too fast because if you reach the tip of the mountain too quickly, you’ll fall faster.

Lilou was one the three judges of the Red Bull BC One Malaysia Cypher 2015, which went down on Saturday 6 June ’15 at The Row.