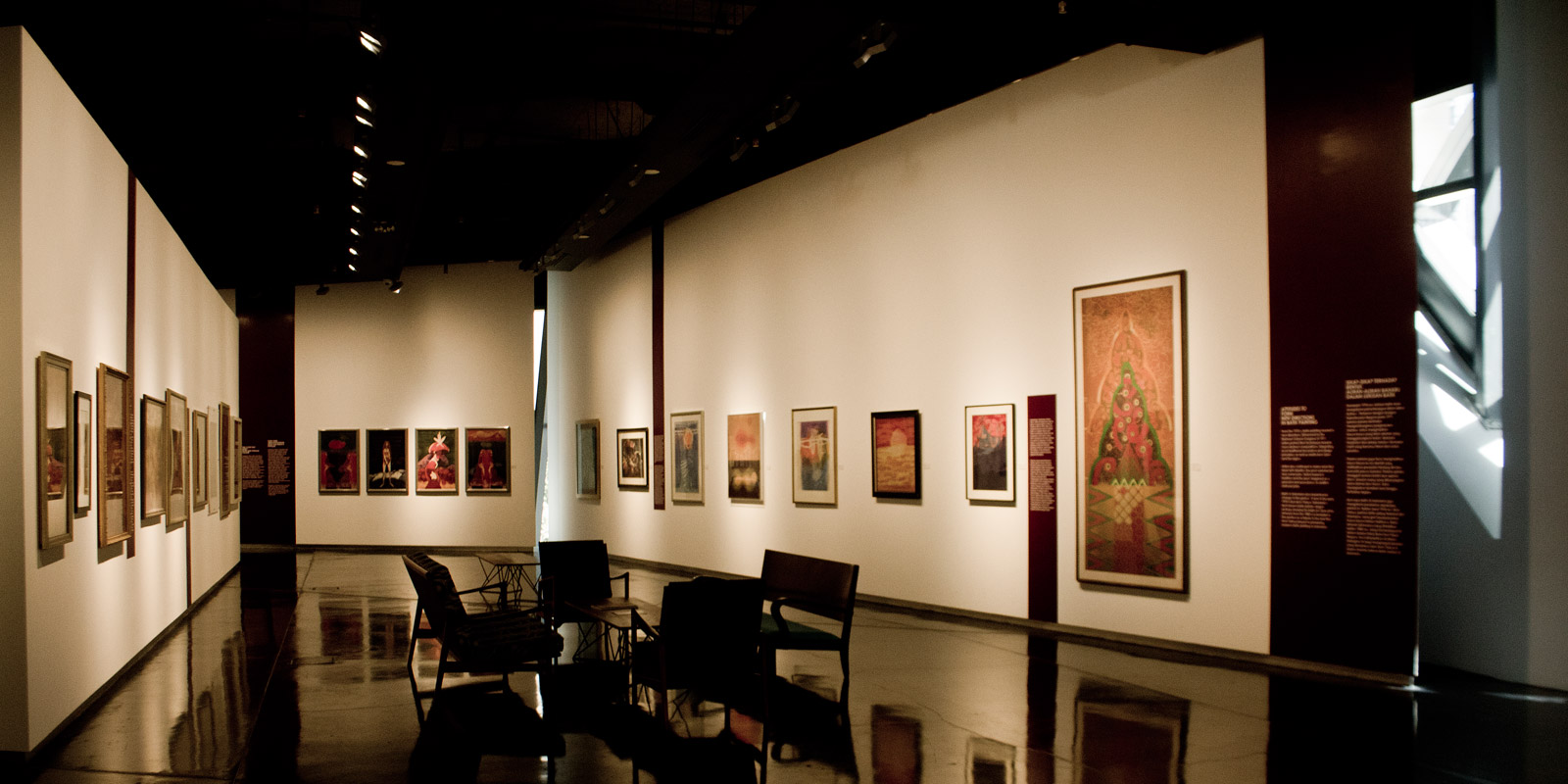 There aren’t many places we can go for inspiration in this city – yes, it’s starting to sound incredibly cliché but there aren’t. Creative spaces charge an arm and a leg for cubical rental, F&B outlets have overpriced drinks and the most displeased facial expression if someone lurked in their space for too long after only ordering a slice of cake and a glass of water, but we can’t blame them completely, these are businesses after all. That’s the problem though – a lot of vacant spaces are turned into places to generate money instead of something that’d benefit a community. If we look hard enough though, we’d be able to find gems hidden around the area that’s looking to replace worn-out ideologies with new perspectives, like Ilham Gallery.

Ilham is a public art gallery that aims to do more than only holding exhibitions for everyone’s viewing pleasure; it hosts educational programmes for anyone from the age of three years old to an age old enough where you needn’t show your IC. The gallery has only been opened since August last year but has already attracted enough attention from the public thanks to the carefully selected activities it’s organised since its opening such as Poking Fire: Contemporary Political Satire in Southeast Asia, The Creative Process: The Making of Jagat, and Love Me In My Batik: Modern Batik Art from Malaysia and Beyond.

There are two levels to Ilham; the first being the resource area where guests are allowed to borrow books from their library and walk through different rooms that exhibit smaller-scale pieces from their major exhibitions. Then, the next one is the main gallery above, which is spacious enough to fit the audience of Cirque du Soleil — alright, we may be exaggerating just a bit but the idea is that there’s enough space for a person to roam freely. The environment of Ilham is relatable; guests will be able to connect to the work — descriptions are written in both English and Bahasa Malaysia — and the folks working there are genuinely helpful and looking to accommodate to any questions or queries anyone might have regarding the pieces exhibited.

It’s definitely an art space we can see growing exponentially and also, there’s a sculpture by Ai Wei Wei at its entrance. If that doesn’t scream legitimacy to you, we don’t know what would.

In order for an establishment to have a strong objective, there must be an even stronger team holding its pillars together – one of them happens to be Gallery Director Rahel Joseph. We spoke to the former lawyer on what Ilham’s contributions are in regards to changing the tone of art appreciation in Malaysia, becoming a qualified curator, and a stereotype associated to art that she’d like to remove if she had the power to.

How important do you think having art-related conversations are?
Very important, that’s one of the things we’re trying to do here. We have a very active public programme where we have regular talks and panel discussions. We even have art tours for toddlers — it’s called Tour for Tots.

What’s that about?
It’s a tour for toddlers from the ages of three to five. The idea is that art can really stimulate the way young children think and absorb information, it’s not a soft skill — it’s proven that being exposed to art actually helps with child development, which is important especially in today’s world where things are being absorbed at a fast rate.

Yeah, we’re a bit too attached to our phones…
You can see three-year-olds looking at their iPads and iPhones, so it’s important to do an activity where they’re sitting down to look at something that’s not being projected on a screen.

What happens during these tours?
The toddlers are taken to view the art in the gallery – they also view our sculptures outside to discuss the different shapes. With our last exhibition, they looked at portraits, solved jigsaw puzzles — these activities help them explore and absorb different ways of looking at things. It’s also about getting kids to go into an art gallery, making them feel like this is part of normal life. This is important if we want to have a gallery-going culture in Malaysia.

Exactly, it’s unfortunate because we have some cool art galleries.
I mean, it’s not like England and the US where you see people lining up to get into a show. I think it’s because we’re used to going to shopping malls instead of galleries.

Do you think the association art has with upper classes has a part to play in that?
That’s partly it, and also because creativity is not emphasised enough. We’re not taught to think independently in schools; we’re not used to arguing or challenging views. How can you as an adult suddenly develop these skills if up until then you were told to “shut up” if you voiced your opinion? I think coming to a gallery is great for kids because there’s no right or wrong answer in art.

How so?
In the sense that a curator will tell you this work means this or that but quite honestly, the artist might not have meant half of those things (laughs). Sometimes they do and sometimes they don’t — a lot of it comes from a very instinctive place. It’s up to the viewer to draw his or her own conclusions.

Is it tricky with exhibiting contemporary art that has a political theme because of the controversial trait tied to it?
If an artist is trying to portray what it means to be a Malaysian or what it means to live in today’s Malaysia, they can’t help but be political. It doesn’t have to be about a party or a political figure. If the artwork is strong artistically, then it has a place in the gallery — depending on what exhibition we have, of course. But I don’t think we’d show work that was trying to be sensational for the sake of it cause for the most part, a lot of that type of work isn’t even that interesting.

As Gallery Director, are you a curator yourself?
My official title at Ilham is Gallery Director, but I co-curated the batik exhibition with Simon Soon — an independent curator who works with us — and I’ve been working in the art scene for 15 years or so.

Wow, that’s a long time. Have we made progress?
The fact that we have auction houses and we have many more private galleries definitely shows that the art market has evolved. On the other hand, while we have many talented artists, we need stronger institutions. We need to have more people writing about art; we need more qualified curators.

How does one become a qualified curator?
Usually a curator has a degree in art history. It’s also about research and developing your writing and oral skills – continually reading is important. I’m not a good example for this because I did Law at university.

Whoa.
Yes, I practised for a very, very, very short time. I joined Sime Darby to do corporate affairs; at that time they were big art funders and because I was involved in theatre, they kind of gave me the portfolio, so I was doing art sponsorship and funding. Then, I joined the Australian High Commission where I managed the cultural programme for them for seven years, and then I went to Galeri Petronas — I was there for two years.

That’s cool. What’s the decision process like when it comes to choosing which programme to host?
The thing with Ilham is that even though we’re a gallery and principally focussed on visual arts, I wanted our public programmes to be wider in scope and to look at bigger issues in culture and arts. Take our conversation with the director and producer of the film JAGAT as an example, the movie came out at the end of last year and many people who saw it were very taken by it, so I thought it’d be interesting for them [those behind the film] to talk about it.

How did it go?
I was inspired by just listening to Siva and Shanjhey; what they had to do to raise money and the difficulties it took to create the film. It’s inspiring to know that people out there are trying to do good work, and no matter how difficult it is or how everything is kind of against it in a way, you can still manage to create something that people talk about and are impressed by. It doesn’t matter if it’s film, theatre, or music in terms of what we’re discussing — the ideas [and] the subjects that these Malaysian artists are focussing on make these conversations interesting.

Very nice. If you could remove a stereotype from the arts culture, which would it be?
That art is intimidating, in the sense that you need to know about art before walking into a gallery. One of the things that we try to do at Ilham is that we want it to be a space where there’s a lot of accessible information through our wall texts and publications. Also, when you come to Ilham, you’re not buying art; it’s about the exhibition, about these particular artists and why these works were selected. The idea is when you come in, we give you some context and background so you can enjoy the exhibition more. We want to make information available and we want it to be accessible, so it’s even in the way that we present information – it should be in terms of language that’s more conversational; more simple. We don’t use art theories that nobody is going to understand.