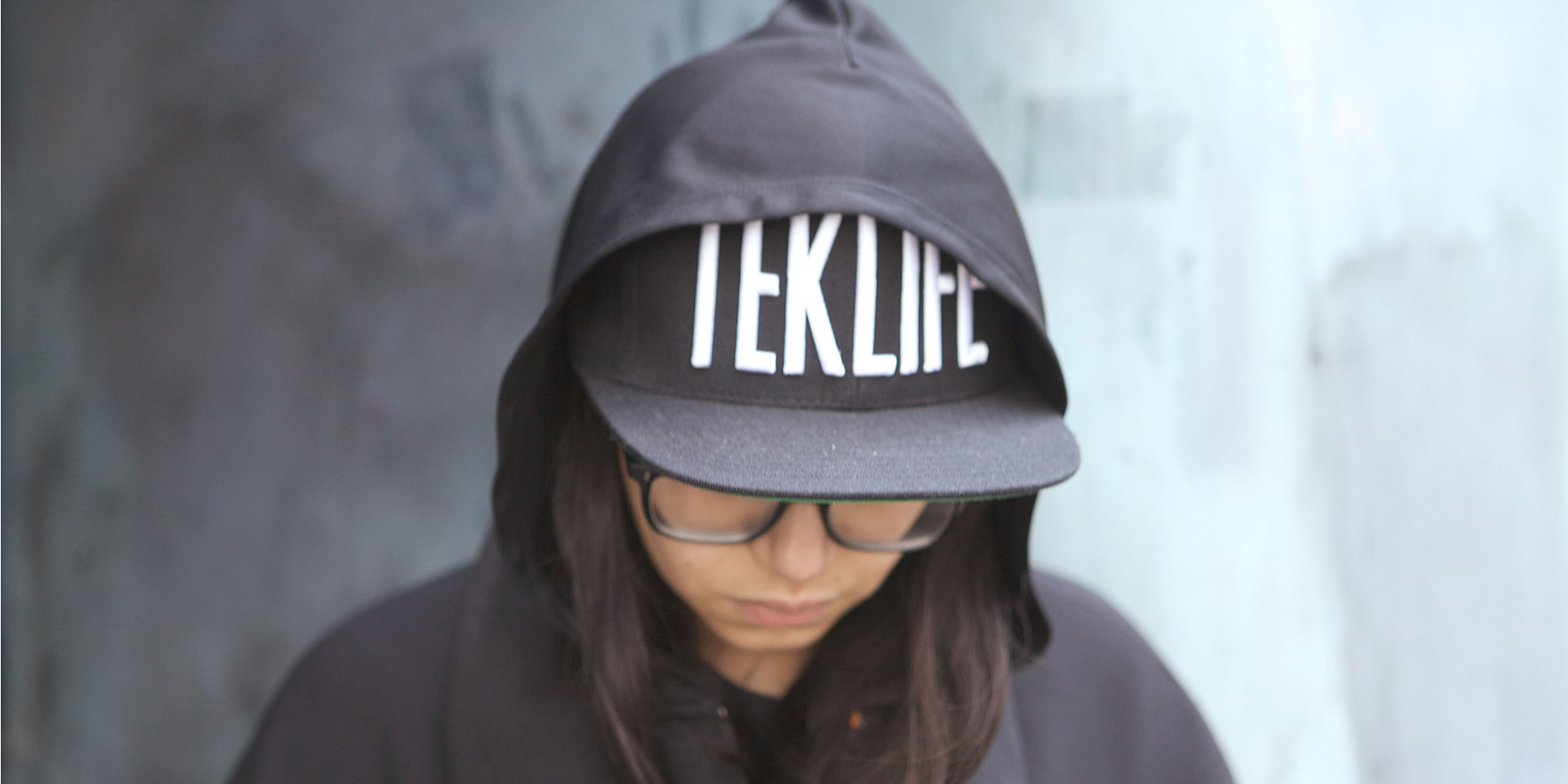 Sara Abdel-Hamid, professionally known as Ikonika, has been with London label Hyperdub – home to many a renowned producer (think Burial, the late Rashad, and people of their upper echelon) – for nearly a decade now. Her debut 12” ‘Please’/’Simulacrum’ in 2008 led to her being anointed with titles that highlighted her gender, race, or religion first, then the supposed genre of her music (i.e. ‘First Lady of Dubstep’, ‘MIA of Dubstep’), but those labels are gross misnomers, not to mention a subtle bigoted backhanded compliment too. Ikonika has decidedly outgrown both the dubstep and post-dubstep labels with her debut LP Contact, Love, Want, Have (2010), and her consequent releases from sophomore Aerotropolis (2013) to EP Position (2014) have all sonically diverged from one another in significant ways – going from melodic synths and chiptunes to a clubscape seemingly following the Club Constructions manifesto. Sara – as Ikonika – isn’t just her race, gender, or even genre as the media are so adamantly focused on, as she puts it, “No one has ever asked me how I would like to be represented.” Ahead of her first Kuala Lumpur show at COMO this Friday night, over a Skype conversation while she enjoys her stay in jungle resort The Dusun, JUICE discusses with her about Women of Colour representation, her giving voice to emotionless machines, and even geeks out about UK sci-fi.

Hi Sara! How’s the Dusun?
It’s lovely here, I’ve never been in the jungle before. I’ve been bitten by loads of mozzies though.

Part and parcel of being in the jungle…
(Laughs) Yeah!

“… generally studios are a bit ugly; too many machines that look too masculine and emotionless. My job is to let my machines have a voice.”

As we understand it, you have quite a visual approach to making music where you’d find stimulants in movies and videos. Now being in a jungle environment where natural sights and sounds are abundant, has that stimulated you the same way?
That’s right, sometimes in the studio I’ll put on something on YouTube – it can be anything from a sci-fi film to a collection of old MTV idents. I find that it helps me get into the groove because it can sometimes feel quite sterile in studios. I think generally studios are a bit ugly; too many machines that look too masculine and emotionless. My job is to let my machines have a voice – so, it’s great being somewhere like the Dusun; the inspiration is abundant. I find myself staring into the scenery for hours, and also, I finally have time to read. At the moment, I’m reading a collection of essays by Roxane Gay called Bad Feminist: Essays.

Cee’s got this thing where he would invite his special guests to make music at the open studio in The Dusun for a compilation called The Dusun Sessions — you guys got anything planned for that?
Maybe. He’s asked me already if I wanna get in the studio. Today is a rest day and the sun is out, so I’ll be by the pool all day. If we have time tomorrow, then definitely. I’m new to Ableton, so I’m hoping he’ll show me some tricks. He says he’s working on becoming a certified trainer, so I’d be very happy for him to practise on me. I definitely want to sample some of the sounds from the jungle.

“I’ve always brushed off the media because they usually label me wrong – no one has ever asked me how I would like to be represented.”

Early on when you just came about in the scene, the media put a lot of focus on your being a female DJ-producer, even calling you the First Lady of Dubstep, as if it were a surprise that women make that kind of music too. Fast forward to now, do you feel the scene and the media are better in their portrayal of women in music? Have we grown?
I think maybe it’s grown an inch – there is a lot of work to be done. I’m lucky enough to be surrounded by great feminists, so I feel a certain responsibility these days because women, especially WOC (Women of Colour), are so unrepresented. I feel very lucky to be in Asia right now because I am able share my music to wider audience. I’ve always brushed off the media because they usually label me wrong – no one has ever asked me how I would like to be represented. I feel the lack of discussion has led to poor portrayal of women in music.

What’s the one thing that the media do when writing about you that always rubs you off the wrong way?
Generally, they try to pigeonhole me. I know a lot of people identify me as a dubstep artiste, but really I’m just an artiste. Each record of mine is a different chapter, my music will constantly change, whether it be exploring new styles or exploring different personas. I think this is the main function of Ikonika – this is the same for my DJ sets, I can explore many scenes in the space of an hour. The best thing anyone can do is just be open-minded.

Speaking of exploring new styles, your last Hyperdub release, Position, was decidedly more club-ready in its gritty, spatial club sound — was that somehow indebted to your affiliation to Night Slugs and its Club Constructions manifesto?
With Position, I didn’t want to think too deep. It’s a really cold EP and reminds me of the texture of concrete – I think I was becoming cold myself. My sets at that time were very brute, I started to not care about an emotional connection in the club. I just wanted the club space to be very abrasive, with no room for digestion. My mood as a DJ changes, it can be very unforgiving at times. I think this would be the downfall for me – I feel I need a connection from the dancers for me to feel human again.

“If a synth misbehaves, I feel you must let it be – it is probably trying to communicate something to you.”

Bringing this back to what you said about the sterility of studios, is this what happens when you’re surrounded by too many cold, emotionless machines?
You can either turn into one yourself or you can work with them, although I feel the two can learn from each other. If a synth misbehaves, I feel you must let it be – it is probably trying to communicate something to you. It’s better to work together rather than have one or the other thinking that they are superior.

You’re quite the gearhead, right? What do you make of up-and-coming producers who still stick to making beats on their laptops with their chosen DAWs and no physical instrument?
I started that way – just headphones and a laptop. But for me, I thought it was important to learn from particularly older equipment; to find out how my favourite XTs from my childhood were made. But I appreciate modern technology and I’m very thankful for DAWs like Ableton. It’s about finding a balance between the two – I like being physical in the studio, I want it to feel like labour.

It becomes more of a serious endeavour that way as opposed to just a hobby you do in front of the computer?
It’s art and work.

Can art and work be one of the same without sacrificing a bit of the other?
I think you have to take your art seriously and you have to work at it; you have to feel responsible for the art you put out. I don’t see it as a hobby anymore, everything I do from now on has to be the best representation of myself and create a deeper meaning. Even if there is no concept or theme, it’s important that it’s honest and every element in the track has a job. Refining is key.

Definitely. Going back to you as also a visual person, we read that you were a former film student as well — so we take it you’re big on film scores too? If true, can you tell us about some of your favourites?
To be honest, I’m not very keen on most scores. The problem I have is that every new sci-fi film/TV show uses a very similar ARP + Moog-like sound. To me, that’s very boring, it shows no elevation; the total opposite of what sci-fi is.

Ah, that’s quite surprising, most electronic musicians we’ve interviewed are usually very keen on sci-fi scores — especially Van…
Don’t get me wrong though, I love a bit of Vangelis.

“Vangelis laid the groundwork and nobody progressed it.”

Oh, there you go.
(Laughs) But nothing, in my opinion, has moved on from that. Vangelis laid the groundwork and nobody progressed it – I’m just talking about sci-fi films [though.]

Randomly, have you seen this British series called Utopia? Very human too, and had a fantastic score to boot.
Yes, I enjoyed that as well, I thought the colours were great, vibrant. Humans is great too – and of course, Black Mirror. UK sci-fi is good.

“It’s hard [to enjoy sci-fi] when you feel like you’re actually living in dystopia – I just feel I don’t want to be reminded of that.”

Agreed. You mentioned that sci-fi should be about elevation, but do you find that oftentimes most are just depressing and dystopian? (Y’know, pretty much the shows we mentioned here.)
(Laughs) Yeah, that’s why it needs some elevation. It’s hard when you feel like you’re actually living in dystopia – I just feel I don’t want to be reminded of that. I like it when the theme is about being free rather than escaping…

Especially with Brexit and President-elect Trump, we’re definitely in some kind of dystopia.
It’s very hard to see fascism rising. It’s terrifying – we do need to laugh at it but it’s so hard!

Do you think music should address that, or should music be a relief to the reality that we’re living in now?
I think it can be any of that. Even if it’s not obvious, you can definitely feel when an artiste gets it – You feel it when a rave gets it.