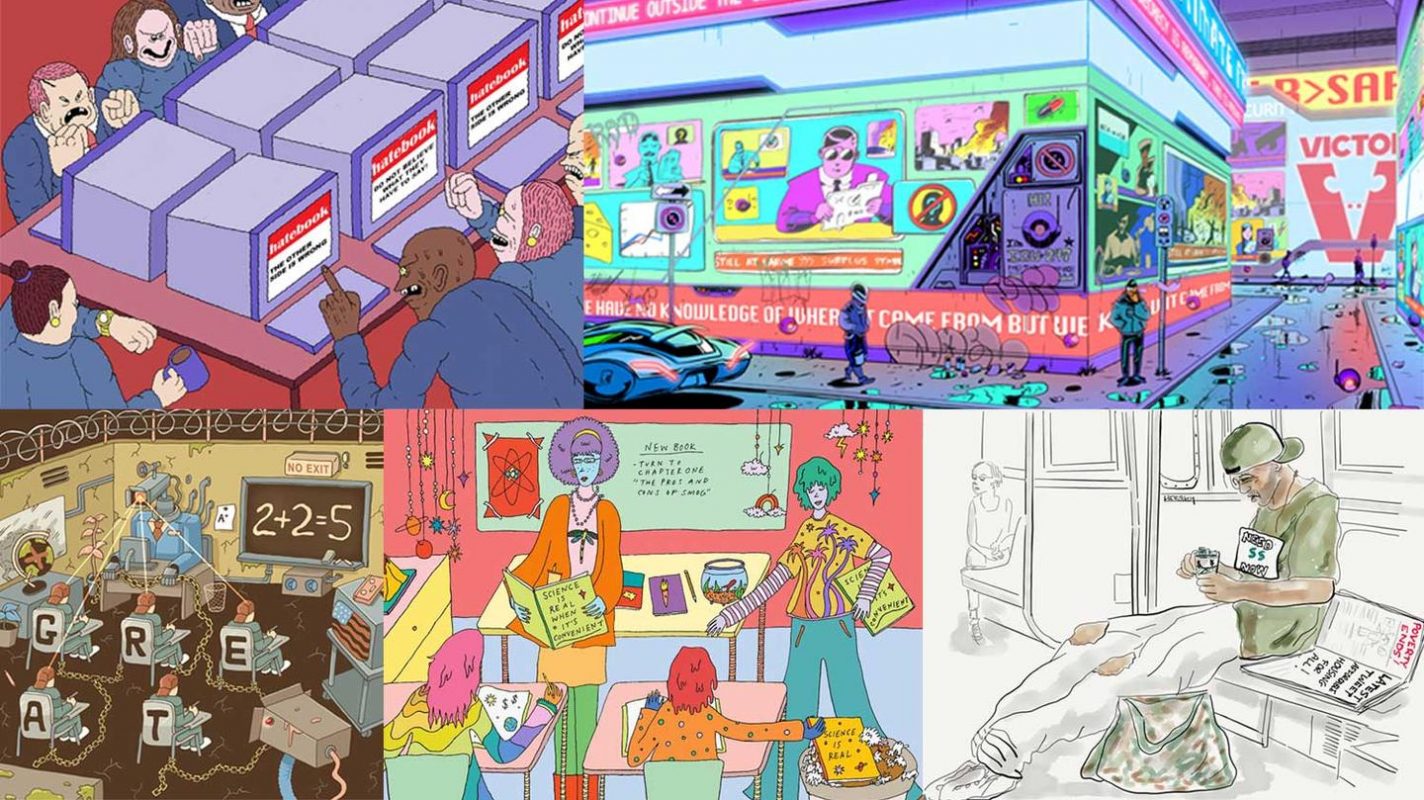 Sales of George Orwell’s novel 1984 skyrocketed since Trump’s victory last year, leading some to say that this is a sign of some sort of apocalypse. If only Orwell had mentioned that Big Brother would be an orange panda in a business suit back in 1949 (when the book was first published), then world would be ready for such a tacky Anti-Christ.

Against the current political injustice hitting America, Creators by VICE (which has worked with the likes of M83, The xx, Karen O, and Spike Jonze) recently asked five artists to “illustrate the terms and concepts from the book that they see reflected in today’s society.”

Lately I have been thinking about how Trump and the apparatus that Trump represents [are] controlling the media by launching a war on the media in the form of discrediting it. If media is always supposedly bogus, it could become hard to believe any of it. Then there was the debut [of] “alternative facts”—which struck me as Orwellian when I first heard it—this idea that people could be [led] to believe that somehow facts are subjective. While, of course, people could become radicalised in a nationalistic way as in 1984, the path I see is more that people are gradually becoming more and more apathetic. This piece is capturing those ideas. As a sort of secret detail: All my drawings include what I think of as a surveillance bot; the little hovering orb with the red (recording dot) eye. — Alex S. Martin

For this drawing, I focused on what the government’s plans are for the American public school system and whether or not these plans will yield an acceptable outcome. I applied the idea of mind control that takes place in the sinister ‘Room 101’ in 1984 to a rundown public school in the future. In ‘Room 101’, a person is re-educated by being subjected to their greatest fear in order to forcibly control their reality. In the drawing, government cutbacks have led to the introduction of robot teachers providing substandard curriculum. These robot teachers are blasting horrible fears into the minds of these students, forcing them to revise and believe that 2+2=5. — Joe Baker

I’d obviously like to do Ministry of Truth. Two characters on a bench in the subway, one poor and desperate looking at another one. A nearby paper says, “Poverty Ends! Latest Tweet: Affordable housing for all!” — Jennifer Hershey

This is my take on the two minutes of hate idea. It’s a scene of an office space where everyone is angrily shouting at their PCs [instead of a communal theatre]. — Alex Gamsu Jenkins

A relevant concept is “Doublethink,” and this is the quote that I’m referencing: “In memory. Very well, then. We, the Party, control all records, and we control all memories. Then we control the past, do we not?” I think that this really relates to how the Trump administration deleted sites on the Obama administration’s website and cut funding to programmes that fund the arts, such as PBS and NPR.

In a classroom setting, there is a trashcan with a book in it that says, “Science is real.” The teacher is passing out new textbooks that say, “Science is real when it’s convenient.” This plays on the idea of rewriting history when history is currently impacting us. — Corrine James

In a time when “alternative facts” seem to crop up at the slightest of issues, can you see a bit of Malaysia in Trumptopia?

If you haven’t read Orwell’s 1984, purchase a copy now or stream the original 1954 Hollywood film in its entirety here.