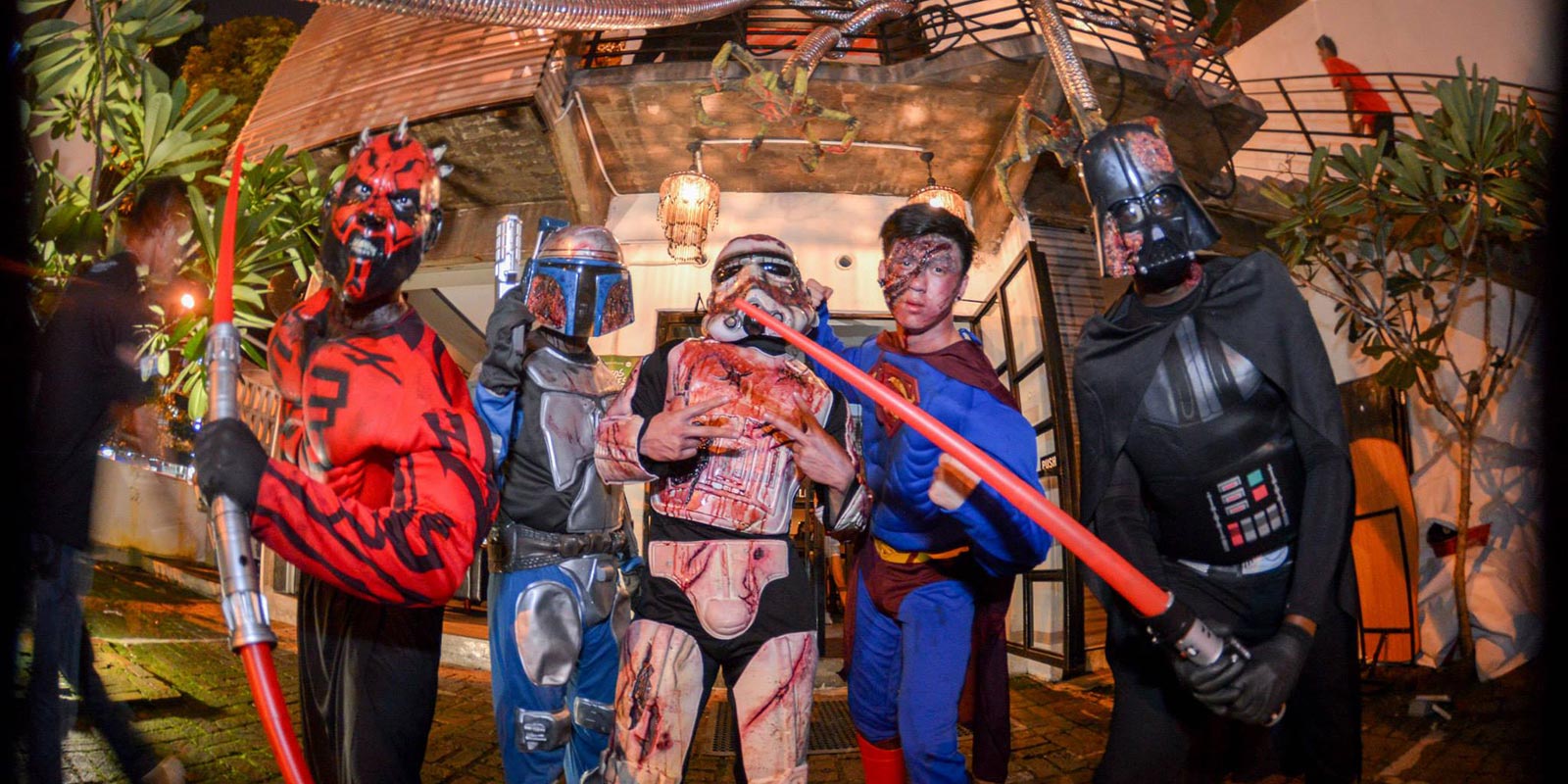 It’s the season to scare guests, find new ways to reuse past costumes, and above all else, another excuse to comfort ourselves when getting smashed. This weekend, KL’s popular nightlife areas will be decked out with ornaments that bar managers believe fall under the “spooky” category, cocktails renamed after classic horror movies, and plenty of questionable costumes. Here are some of the few parties happening in KL that will guarantee a night party animals (an idea for a costume, perhaps?) will not forget.

KL Journal decided to keep away from the expected Halloween-themed party by planning a movie night revolving around both international and Asian horror films such as Shutter, The Grudge, and Ring in Studio 3, and The Shining, From Dusk till Dawn, and Shaun of The Dead in the Gallery. Studio 3 doesn’t have a cover fee, however, to watch films in the Gallery, guests will have to pay RM65 which entitles them to being comforted by cosy beanbags, complimentary bags of popcorn or nachos, and a free flow of soft drinks, coffee, or tea. Being in costume isn’t mandatory, of course, but guests that do put in the effort to represent themselves using a fictional character has the possibility of winning free stays at KL Journal.

BAIT’s annual Halloween bus ride tour returns this year with the objective of “claiming more victims” — a phrase that’s only suitable to be said during this time of the year. The mechanics of this activity is simple: guests are welcomed onto a party bus that will take them to parties around the Klang Valley; the four stops this year being Le Noir, Mantra, KL Journal, and BAIT, of course. The cover charge for this party is of the more extreme end of the spectrum, however, this fee also includes all costs for drinks, party kits, and other equipment needed to complete a night of ratchetivity.

So, maybe bus tours aren’t very appealing because of the possibility of having motion sickness whilst being drunk. The next best thing though, would be a pub-crawl, and what better place to live through that than the ever colourful Changkat? Smirnoff Ice has planned a night of chugging down breezers, playing many rounds of ice bomb pong, jenga, eating alcohol popsicles, jello shots, and more for an affordable price of RM70. Since we love our readers very much, we’ve decided to gift them with tickets to this night crawl, however, y’all have to join the contest here.

The folks behind SaturdaySelects are back for its fourth edition at Arte Bar with Cønfucius, RE.DFNE, P R A V of .Wav(y), and Mejar Thanni on the roster. Young’uns can safely anticipate a balance of present and past favourites; the playlist will most likely include a mixture of acts like Missy Elliott, Keith Ape, ASAP Ferg, and Ludacris, probably. If these artistes are your cup of tea, look no further to quench your thirst than here.

A Sunday Affair x Rise of the Villains

It feels just like yesterday that we collaborated with A Sunday Affair (ASA) for our 14th anniversary party… when in fact, it was a month ago. Time flies when you have editorial deadlines. Moving forward, ASA has curated a flea market surrounding villains, so, guests might be able to find trinkets that could potentially complement the likes of the Joker, Dr Doom, or Darkseid. For its musical aspect, ASA’s prepped its stage for Rozella, Enterprise, The Otherside Orchestra, Hunny Madu & Kayda, and plenty of others.

Staying out for an entire night to drink, dance, and getting drunk to a point of forgetting one’s name a day before work is a tad bit risky, but what’s life without a little thrill, right? The BIG Group has organised a week’s long worth of Halloween parties under its ‘Carnevil’ umbrella; this event is the finale, which will include several killer cocktails (not literally, of course), performances by cirque du freaks, and more horror movie film screenings.