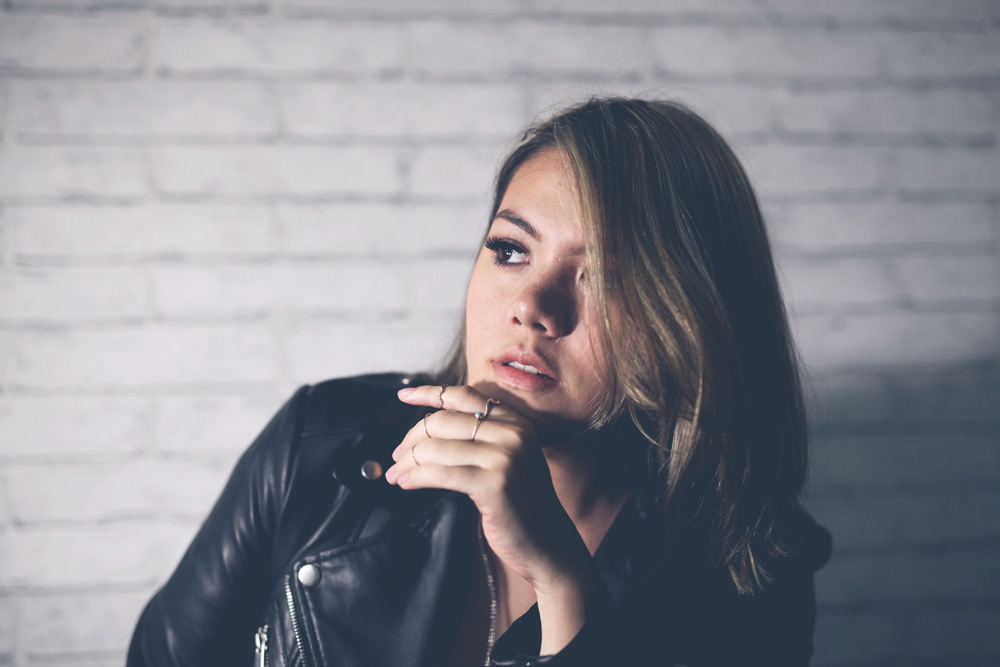 For someone who sings a lot about her feelings, Ffion doesn’t realise how much her music speaks for her, she simply does her own thing and it didn’t take long for people to catch up. Now in the midst of preparing her EP that’s purportedly out in the middle of the year, this Singapore-based up-and-coming singer-songwriter talked to us about a bunch of stuff and it all revealed Ffion as authentically your girl-next-door who just happens to be compared to the likes of Banks thanks to the wispy quality of her voice. Humble from the get go, she told JUICE via email about how she feels when even taxi drivers give her career the stamp of approval, one that she hopes to retain by staying true to herself despite the shallow expectations most artistes face. There’s a strong woman behind the sentimentality after all.

Besides being an alt. r’n’b songstress and former prolific YouTuber, who is Ffion Williams?
I’m generally just your average uni-going, ice cream-loving 20-year-old who occasionally still thinks she’s a teenager.

Speaking of which, that’s the term you used to describe yourself on SoundCloud – electronic alternative r’n’b. What’s the distinction between that and plain ol’ r’n’b?
Honestly, I never saw myself becoming an r’n’b singer and I kind of still don’t, but musically, everything just sort of came out that way. I’m trying to think of a better way to describe my music but I guess for now alt. r’n’b will have to do!

“I usually have no idea what I’m writing about when I’m writing a song, it’s sort of a stream of consciousness that comes out.”

You open up about the intricacy of a relationship a lot in your songs. Do you normally feel first, then write (songs)? Or write then feel?
I’m really bad at expressing my feelings to other people, so I usually have no idea what I’m writing about when I’m writing a song, it’s sort of a stream of consciousness that comes out. I then pick and choose certain phrases that I feel represent the emotions I feel and expand on that. So, I guess I feel and then write!

Your collaboration with GROSSE the beatsmith has given birth to ‘I Miss U’ and ‘With U’, tracks that have undeniably brought major limelight to you. What was the creative process like?
It was really different from what I was used to. I’ve known GROSSE since I was 15 although back then we were never very close. But he’s kinda seen the mistakes I’ve made in my past and helped me get through them with songwriting. We usually talk for hours before a recording and I usually go to him when I feel like I need to get something off my mind.

He has also produced music for other acts that have brought them crossover appeal too. What do you think about GROSSE that resonates with fellow artistes and audiences alike?
He has this authenticity and rawness about his music, not a lot of people have that anymore.

The track ‘Over’ is very much different than the melancholic vibes of your two other songs. What inspired you to make the shift in beats? Is it the shift in producers?
I wrote ‘Over’ when I was 18 and it was the first ‘real’ song I ever wrote, the original is totally different from the current version that is out now. It’s gone through the hands of many producers and I really like what Jeff [Hue] did with the track. This was all done before ‘With U’ came out, so I had no idea how people would react to it once ‘Over‘ was dropped.

We thought the music video for ‘I Miss U’ had quite a denouement where it was the wronged female partner that physically abused the male, but he still had this shit-eating grin on his face anyway. Was it to show that men still have an unfair advantage even if the tides were turned?
It’s interesting to hear people’s take on the music video and I would hate to destroy their interpretation of it. From my point of view, the male character is merely a “mirage” in her life, he’s always there in her mind and he has hurt her many times through his actions. But he’s never really there and therefore can’t feel any physical pain, but he does appreciate any form of attention he gets from her, it’s almost as though he wins no matter what.

What can we expect from your upcoming EP?
It’ll be a musical journey of sorts, a lot of story-telling and songs about love. The songs in the main EP are produced by GROSSE, so it stays very true to the themes of ‘With U’ and ‘I Miss U’.

“[Love’s] what I feel for the most part at the moment and it’s on my mind most of the time.”

You seem like the romantic type (based on your music and videos, of course), would you say that love is the basis of your songwriting?
Is it that easy to tell! I would definitely say that I am the romantic type, and that most of my songs are based on love. It’s what I feel for the most part at the moment and it’s on my mind most of the time. It’s also a good way to connect with people and get them to open up.

Let’s talk about life. You’re a pretty private one online, have you ever thought of interacting more with fans beyond work or do you want your work to just do the talking?
At the moment, I don’t have much of a life thanks to uni! But I do think my work does more of the talking than I’ll ever be able to do through social media. I’m always worried what people will think if I do something a bit too extreme online. But I do love talking to people face to face or through DMs. I love talking to people after shows as well!

To this day, what has someone said about you or your music that really makes you feel like this musical journey is worth it?
I had an English teacher once in high school who was super supportive about my music. When I left high school to pursue an education that was fully focused on music, he said I was really brave for taking a road less travelled. That made me feel like I was on a path that was really special and I make an effort to encourage others who are on the same path or want to be on the same path to follow their passion. I also feel very validated when taxi drivers say they approve of my career choice.

“I think people are so used to hearing they need to look a certain way if they want to accomplish something or be someone, I’m trying to prove the opposite.”

There are plenty of singer-songwriters emerging from this Internet era, what would you say is different about you compared to everyone else?
I’d say I don’t necessarily act like your average singer, I try to be as true to myself as possible. I’m not going to change the way I look on a superficial level just so that people will listen to my songs. I think people are so used to hearing they need to look a certain way if they want to accomplish something or be someone, I’m trying to prove the opposite.

We read that you write songs hoping that people relate to you. Who do you relate to (musically/emotionally)? Name us three and why so.
1. James Blake
I first heard his music when I was in high school and immediately was so intrigued. The electronic elements were so minimal yet his voice was so emotive. After hearing him live, I was sold. I’m heavily influenced by the way his music is arranged and his crazy attention to detail, plus his visuals are always so stunning and mesmerising.
2. Amy Winehouse
I remember being 10 years old and being the first one to arrive to class and having my teacher play ‘Rehab’. I was so enthralled by the tone of her voice and how different it sounded from all the chart music that was out at the time. I went home and downloaded her whole discography and buried myself in her music. She is the main reason why I write so much about love and relationships.
3. Adele
You may notice a trend; all these artistes are from the UK. Adele’s music in particular gives me this home-like comfort that I’ll never be able to experience here. I spent many years in high school just covering Adele songs and really grew to love her writing style and character. She’s a present reminder to myself of how important a strong female character should be.

To get more news on Ffion, follow her here.