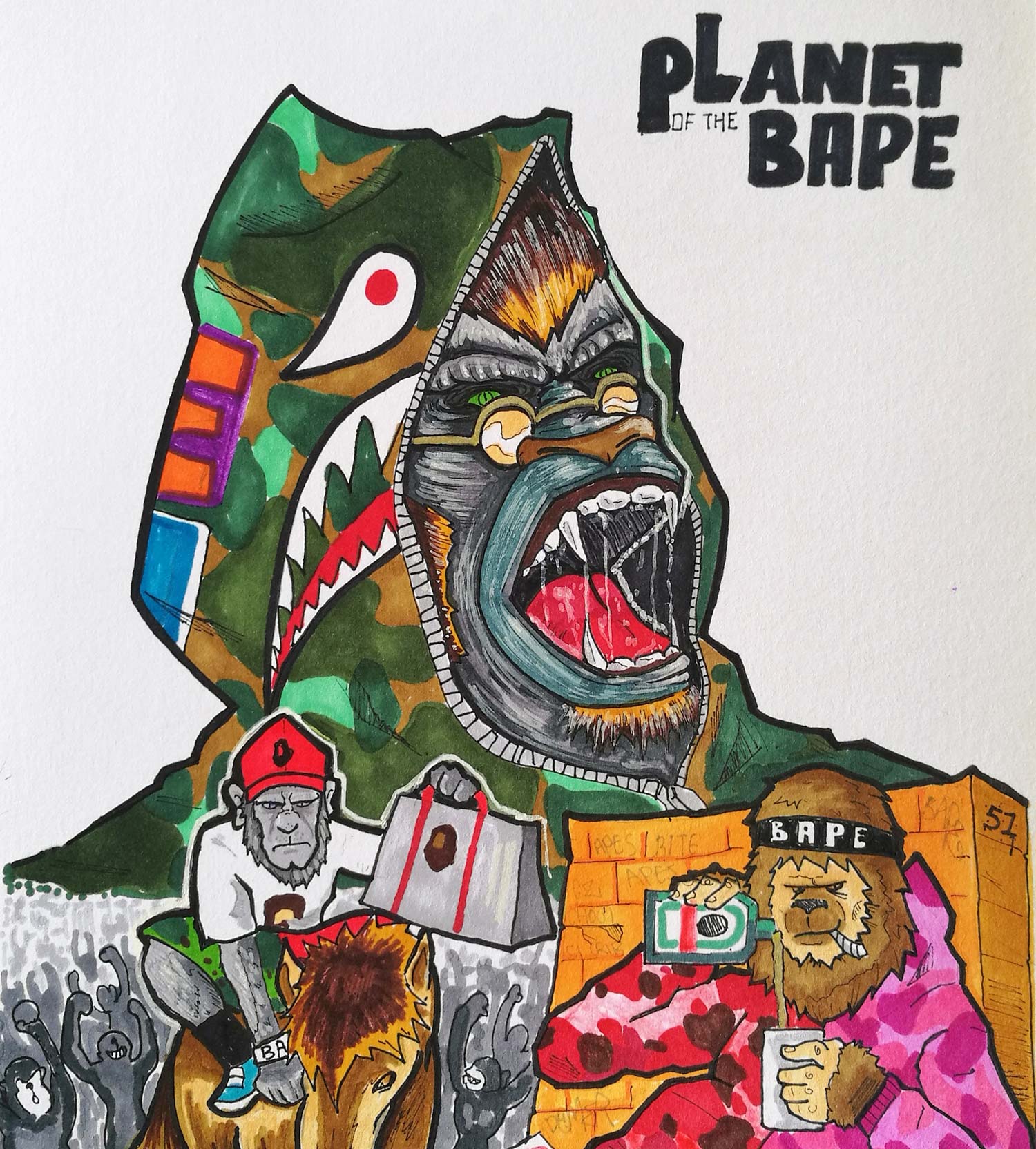 Remember me? The kid who took a shit all over your favourite streetwear brand, Supreme? That’s right, I’m back for more. The hypebeasts were so riled up by that previous article that I decided to return for fresh blood, and this time, I’m sinking my teeth into the brand that rivals Supreme head to head – BAPE.

BAPE, formally known as A Bathing Ape, is pretty much as infamous as Supreme is for its ridiculously high prices and equally exclusive drops. It’s known especially in this part of the world because it was founded in Tokyo (pretty close to home), and is pretty much synonymous with the type of rich Asian fuckboys who are either tourists from mainland China or who were born into rich families (bonus points if they’re the only son or even the only child) and have Little Emperor syndrome. I could easily bash BAPE for every single reason that I bashed Supreme in my previous article, but I’m not going to re-hash previously used content because I don’t work at Buzzfeed. No, this time, I’m going to look on the bright side, and not just because my therapist told me to. You and I both know that streetwear brands are here to stay, overpriced sneakers and all. So, this time, I’m going to take a look at why BAPE has risen to prominence, why it might even be better than Supreme (and other streetwear brands out there), and why its star doesn’t seem to be falling any time soon.

(There, hypebeasts. You happy now?)

BAPE started up in the right place at the right time.

Much like Supreme’s own beginnings in the very fashionable Lower Manhattan, BAPE started out in 1993 as a hole-in-the-wall store in Tokyo’s own fashion hub, Harajuku. In fact, Harajuku is perhaps even more renowned than New York for its unique fashion stores, and as a fashion hub for bolder and more unconventional designers. Harajuku has long since been a source of inspiration for many pop culture icons – see Gwen Stefani’s Harajuku Girls phase in her musical career, and Kyary Pamyu Pamyu unofficially being named the ‘Queen of Harajuku’ for highlighting aspects of fashion and lolita culture rife in the area. New York pales in comparison – when was the last time you heard of a famous singer naming their dance troupe ‘The New York Girls’? Yeah, me neither. So, it’s no surprise that BAPE slowly but surely drew in a loyal batch of customers, before finally shooting to prominence in the early ‘00s. And if you’ve been with a brand from the beginning, chances are you’ll want to stick with it to the end.

BAPE’s designs embody what it means to be a hypebeast.

A lot of BAPE fans weren’t even an idea in their parents’ heads when the brand was founded in 1993, but that’s not stopping these young and loaded millennials from scrambling over each other’s heads to cop newly released BAPE goodies at $90 per t-shirt. As you might already have guessed, streetwear is all about being bombastic. Look at the glaring colours on ‘90s track jackets that are all the rage in vintage stores nowadays, or the insanely large logos on clothing from other prominent streetwear brands like Palace and Champion. And no brand does bombastic better than BAPE – the brand’s defining traits are its vibrant colour palettes and distinctive designs. See, for example, their most famous item, the full-zip shark hoodies, which you’d probably have seen at least once in your life and which every hypebeast has wet dreams about at least three times a week. If that totally Edgy™ pattern and its incredibly prominent colour contrast didn’t already brand its afterimage into the back of your eyelids, then congratulations – you’re made of stronger stuff than most other hypebeasts out there. But the rest of us are weak, and love to stand out from the crowd in patterns so gaudy they’ll make your eyes bleed. So what else is there to do except fork out another £300 for a fifth BAPE hoodie?

Nigo’s business strategy mirrors all the other ‘premium’ streetwear brands out there – with a catch.

Every hypebeast’s favourite brands are on that buy list for one reason in common – exclusivity. While rich mums shop at Gucci and Louis Vuitton, rich kids shop at Comme des Garçons and HUF; and BAPE has undoubtedly been king of the exclusivity gimmick for years now. In the ‘90s, when BAPE first started out, one of its main draws was the fact that stock was extremely limited – the brand’s founder, Nigo, only produced 30 to 50 shirts a week, and half of those were given to his friends for free instead of being sold in its tiny Harajuku store. It goes without saying that back then, BAPE was only available in Japan, which meant that American and European hypebeasts had to fork out even more money for shipping and packing from resellers on middleman free-market sites like Rakuten or eBay. Even now, BAPE boasts a different kind of exclusivity altogether. In America, BAPE is notoriously hard to obtain, since its only store in the States is located in New York (unlike other brands like Supreme, which has several flagship stores in different states). As for everywhere else, BAPE is only available in its own stores (which are, of course, scattered sparsely across the globe), or from retailers like RSVP Gallery. But don’t be heartened by this extra opportunity – the bathing ape still remains mostly elusive, as retailers must sign a proper partnership with BAPE before being allowed to stock their merch. So let’s just say that you won’t be seeing BAPE stocked at Isetan KLCC or other stores of its ilk any time soon, which means that the hype around the brand will remain forever intact.

Love it or hate it, BAPE clothing is a status symbol now.

“WHAT ARE THOOOOOSE?!” you might find yourself asking, after having a look at the above sneakers. Well, even a fledgling hypebeast will be able to tell you that these are none other than the BAPE x Kanye West collab BAPESTA sneakers, available for purchase at the low, low price of $2,500 (or, alternately, both your kidneys). Kanye West isn’t the only mega-celebrity repping BAPE either – over the years, the brand has seen the likes of Pharrell and Kid Cudi designing with them, and Jay Z even sported a jacket from them on stage once. Combined with the exclusivity shtick we talked about earlier, it doesn’t take a rocket scientist to figure out why everyone on the planet, from rich pre-pubescent only-sons who want to impress their friends at their prestigious but conservative boarding schools to 40-year-old hypebeasts who don’t leave their basement except to line up for the new Supreme drop, wants a piece of the BAPE name. Sure, sane people may not feel this burning need within them to blow $2,500 on shoes in the hope of gaining some friends. But then again, I’m not a spoiled Chinese boy whose father earns enough in a month to buy a small nation off the South American coast, so who am I to say how their minds work?

BAPE isn’t just about the clothing, it’s also about the stores themselves.

It’s not every day that anyone, let alone a hypebeast, would want to visit a clothing store just for the store itself. But BAPE stores are more than just a hole in the wall now – they’re an experience in themselves. Designed by Wonderwall, an interior design firm responsible for Uniqlo’s iconic LED-adorned flagship stores in New York and London, each BAPE store tells a story of its own, unlike the flagships of most other streetwear brands like Palace and Supreme. The BAPE store in Harajuku looks like a retro American diner, with brightly lit signs, steel railings, and vintage paisley decor. Its Shibuya store (pictured above), on the other hand, looks more like a disco from the ’80s than a clothing store, with an entire wall of multi-coloured flashing lights and a neon-drenched interior. Meanwhile, the New York store looks like it could have come straight from the pages of an IKEA catalogue, except with even cosier furniture and better minimalism than even the Swedish can do. Shopping at BAPE’s stores is like an adventure in itself – hell, if it means I get to throw down on that neon dancefloor, I’ll get in line for entry too.

You, too, could be part of the Underwater Squad with BAPE.

The longest-enduring Asian meme even has BAPE as part of its shrieking, flailing legacy. Squad shit indeed.

(NOTE: Please do not watch the above video if you have photosensitive epilepsy. You won’t miss much, anyway – just a really pitchy Asian rapper making a fool of himself. Okasian spits some fire on the track, but otherwise it’s pretty much just another meme.)

Sure, Supreme’s done collabs with just about every big-name celebrity on the planet. But what they haven’t done is also put out products that would just about fit into every corner of your life. BAPE deserves some extra kudos for their particularly aggressive marketing strategy, which basically involves collaborating with everything and everyone until you find yourself eating off BAPE plates, shaving with a BAPE razor, and shitting into a BAPE toilet. (Well, not literally, but you’re probably going to see some of this stuff get put out sooner or later). BAPE has collaborated with Disney to make camo-print Pooh Bear plushies, there are BAPE fishing hooks and tackles, and there were even special edition BAPE Pepsi cans floating around the free market several years ago. BAPE specialise in branching out so far beyond clothing that it’s almost impossible for even the more restrained hypebeast to tell themselves, “No, I wouldn’t need that in my life, not even if it’s branded.” It’s like the robot takeover, but with BAPE instead – it happens slowly, then all at once.

If the average BAPE fan is anything like this guy, then the brand pretty much has it in the bag.

“FUCK THUPREME,” says the internet’s biggest BAPE meme next to Keith Ape – a man who calls himself the Ape, who prides himself on running around New York and terrorising Supreme fans and employees in and around its stores. I’m not condoning this type of behaviour, which is more embarrassing than it is cool, really. But the fact that BAPE has such insane fans who would set aside all decorum and human decency to display their burning passion for the brand just says it all, really. Until the Supreme fans take to the streets, BAPE might just have won this round.

What’s that? What of Supreme, you ask? Well, we have a bunch of thoughts on that as well.