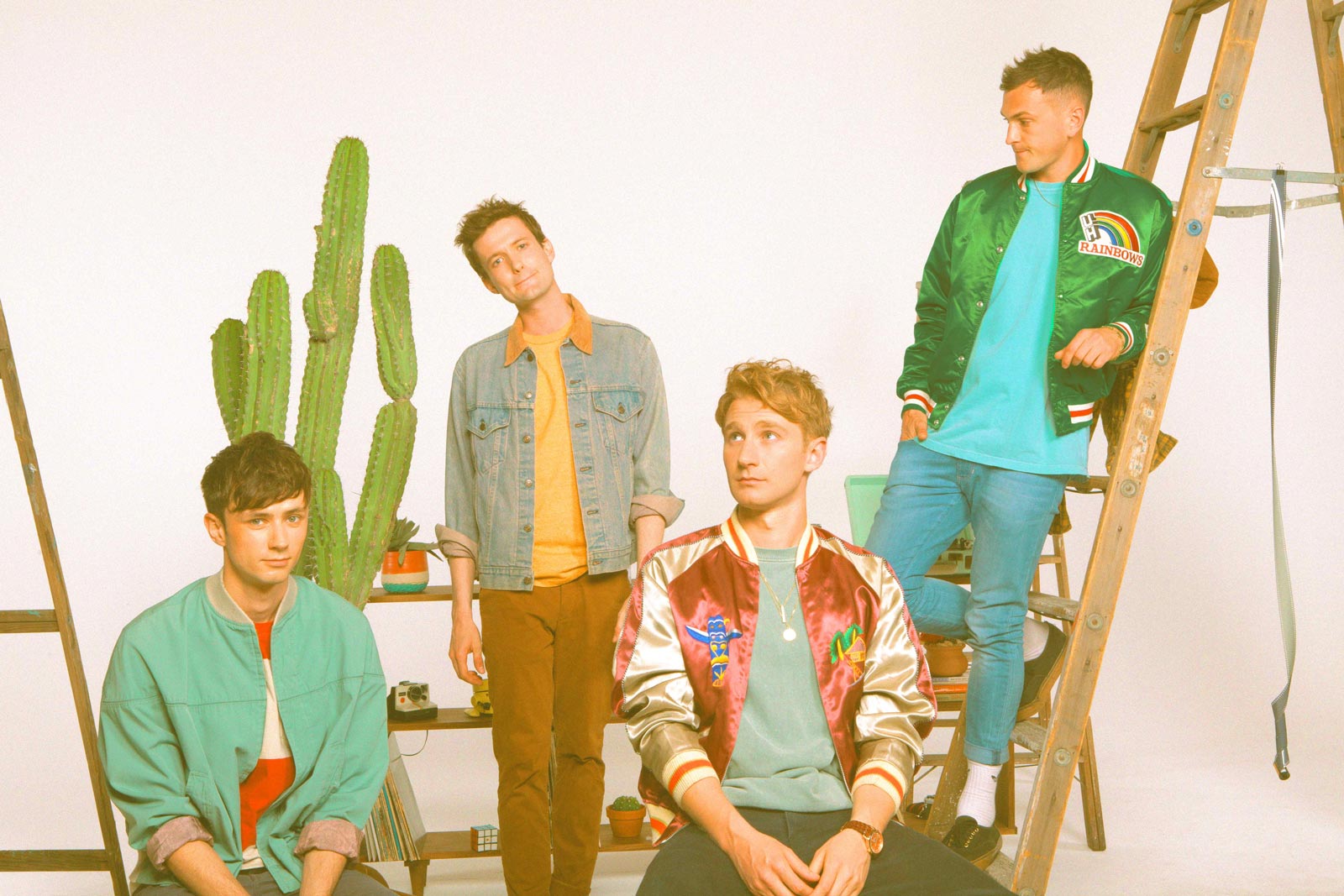 Transposing themselves from the literal jungle of Zaba – the band literally recorded the album in the woods – to the concrete jungle of How to Be a Human Being (HBHB), Glass Animals’ sophomore album is a matter-of-fact reflection of its title. Frontman Dave Bayley decants the numerous tales relayed to him by fans and the quirky characters he had met during the tour of their first release into a single collective human experience, cleverly utilising the art of the concept album (each track represents a character shown on its cover) and then supplementing it with a digital expansion of the narrative (where each character receives their own website). So when the opportunity arises for JUICE to have a tête-à-tête with Dave ahead of their show at Laneway Festival Singapore ‘17, the conversation goes through the hoops of making art out of real-life and vice versa.

How to Be A Human Being (HBHB) was composed with the words first before the music, with an intention that’s reflective of the title; the story had to be real, the characters relatable. We read that the album was partly inspired by docu-filmmakers Les Blank and Errol Morris; was the album attempting to be the music equivalent of cinéma vérité of sort?
In the way that I was trying to present the real world and its issues, yes. But then there’s a bit more fiction and autobiography in it than those filmmakers would care to incorporate. I always loved the way the techniques of cinéma vérité were used in TV programmes like Seinfeld. The writers were using both truth and fiction to present the world. On the surface there was just a funny story, but underneath that there was a commentary on human nature.

Has it always occurred to you guys from the beginning to move from the literal jungle of Zaba to the concrete one of HBHB?
It seemed like an obvious progression. We had made the first record in the woods in the middle of nowhere, not really knowing what we were doing or how we’d found ourselves being ‘professional’ musicians all of a sudden. Then, we were thrown out into the real world, waking up in a different city every day, meeting dozens of people a day, hearing dozens of stories a day. It was only natural to start writing about that.

“… there are things that people were willing to tell me that they may not ever tell their best friends. Only because I was a stranger and I’d never see them again.”

HBHB is based off stories relayed to you by fans and miscellaneous people during your previous tour; they can’t all be that interesting, can they? And what is it about the band that strangers would want to share some of their most interesting life stories to you guys?
Firstly, I can’t be sure all the stories I was told were true. But I think there are things that people were willing to tell me that they may not ever tell their best friends. Only because I was a stranger and I’d never see them again. And I’d never be able to tell their friends what they’d said. Maybe it was a chance to get something off their chest. Maybe it was something to do with trying to impress a stranger.

It’s said that each of the album’s tracks represents a character – and you’ve assigned so many details to their individual ‘lives’ – how do you decant the vast lives of these semi-fictional characters into singular songs?
It’s tough, but that is what writing is about. There are plenty of techniques. You can try to spark people’s imaginations with a few hints at details and let their brains run wild to complete a more complex picture. You can reference other pieces of popular culture. For instance, if you call someone ‘Flash Gordon’ in the lyrics, you automatically attribute all of the personal and physical characteristics of that well-documented character to your new character in just two words. Then, you can use loaded words and quotes that have deeper, wider connotations. I could go on about more writing techniques for hours. And that’s just the writing. Then, you can expand on the writing with artwork – and we’ve actually made websites for all the characters too, to give people even more context and a sense of who these people are.

Spoiler alert for those who are planning to do their own deep reading of the album; what’s the one thread connecting all these stories into one cohesive album?
You have to listen to the album! But ultimately all of these people who are very different on the surface have quite a bit in common too.

We know that the band nicks from various pop culture outlets, be it literary, filmic, or musical, but with your having studied neuroscience, does the band’s sound have a more empirical leaning to it? Something that can be quantified?
I’ve got a bunch of theories about sounds and chords, rhythms and melodies, and how they affect people in a subconscious way. But ultimately, when I’m trying to write something I try to forget all of those things and just go on gut instinct and if it affects you emotionally… if the music makes you feel something, chances are it’s good.

“In real-life, we just sweep a lot of [darkness] under a carpet.”

With HBHB being based on real-life and debut Zaba being more abstract in its lyrics, in our opinion, the former turns out to have some sense of optimism and the latter darker. Is real-life actually much less the dim reality we’d imagine in fiction?
No! I think real-life can be incredibly dark. I think there’s a lot more darkness in HBHB than Zaba actually. In real-life, we just sweep a lot of it under a carpet.

But of course, a happy beat doesn’t mean happy lyrics – case in point opener ‘Life Itself’ and closer ‘Agnes’. Was that intentional? To make deceptively uplifting songs – ‘Pumped up Kicks’-style?
Yes. I think that’s quite often how people tell stories in real-life. People always tell you a cheeky story with a smile on their face. But behind that tale is often something darker. That story is also telling you about their life in general, and about the world that they live in. Often that’s not as funny as the story on the surface.

Aside from the references to various hip hop acts in prior interviews and the collaboration with Joey Bada$$, the band’s fondness for the genre is well-known (or yours, at least). And the influence seems more overt here on HBHB; how do you feel hip hop has influenced music beyond just pop?
Hip hop seems to be the genre where people are experimenting the most with sounds and rhythms at the moment. There’s an amazing openness to experimentation amongst people who listen to hip hop that doesn’t exist in many other genres.

Also, just randomly throwing this out there, you know what would be cool? A Glass Animals album with vocals only by guest rappers…
THAT WOULD BE WICKED!

“[Mistakes] add a soulfulness, a human-ness, and a rawness to the music.”

Usually with sophomores, bands try to sound more polished in their sound thanks to having more access to bigger studios and the budget to do so. But you guys opt to incorporate the spontaneity of recording music onto the album – why?
I think it was a combination of many things. The way the album happened – quickly and spontaneously – and the way that we’d been living – quite rough and ready, playing live a lot. You make mistakes playing live… we’re only human. And I grew to appreciate those mistakes a bit. They add a soulfulness, a human-ness, and a rawness to the music.

Despite that though, musically HBHB Is still quite the maximalist effort in comparison to Zaba; it’s louder and harder, and less ambient and quiet. How do you balance making something sound extreme and fatter while still retaining the grit of spontaneity?
I’m not sure those things are mutually exclusive! Also I think there are moments on HBHB that are more delicate and softer than Zaba was too.

Dave, your love for hip hop came from having lived in the States, did you explore the UK scene though – from Roots Manuva and to the whole grime scene?
I’m a big Roots Manuva fan, and I lived in South London back in 2007 when BBK was taking off… it was exciting to be around, you’d walk down the street and everyone would be playing the new JME track out of their phone.

Can you talk about the title of the album? Does it speak about more than just the concept of having turned the real-life experiences of others into an album and something more meta and/or personal?
It has a bunch of meanings. We’ve touched on some of the ‘meta’ stuff earlier. But on a personal level… our lives changed so much after releasing that first record. We went from being quite reclusive to being around people all day every day. And we had to learn to be a part of that. And we had to become quite different people in some ways.

Lastly, how does one become human?
I’m afraid we’re all born human.

Glass Animals will play Laneway Festival Singapore ’17 on Saturday 21 January ’17 at The Meadow, Gardens by the Bay. Purchase tickets here.