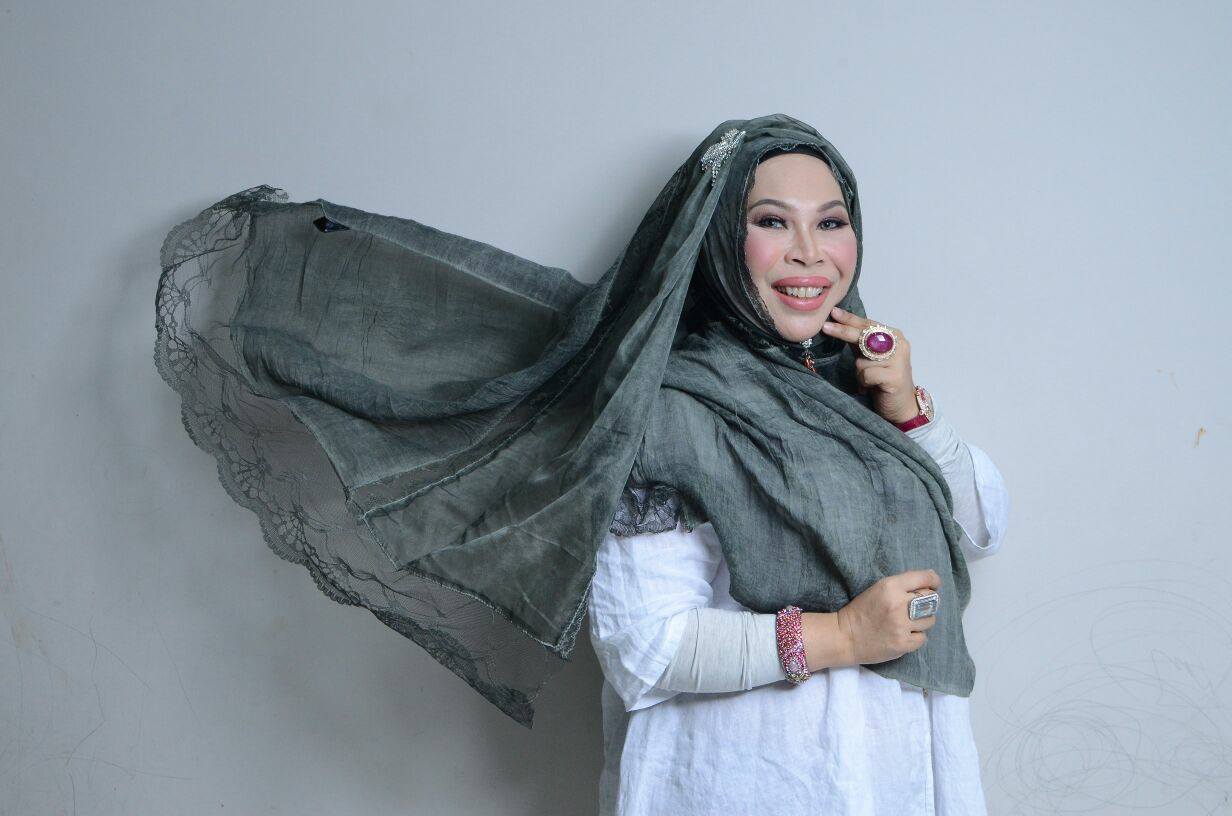 For those of you who are in the loop, and by in the loop I mean in tune with Malay pop culture, Datuk Seri Vida is many things. For starters, she’s the founder and face of Vida Beauty, a multimillionaire because of it, and now, a singer. In fact, it’s not even necessary to familiarise yourself with Malay entertainment when Dr. Vida’s face is plastered on a cardboard advertisement larger than your car on the side of every highway. Thanks to the her infamous “Qu Puteh Qu Puteh, Barulah Putih” slogan, Dr Vida reached celebrity status in just a matter of years after shifting her advertising techniques that helped rebuild her business out of many years of failure. She’s now a huge figure in the local cosmetics scene, and she herself is an icon (don’t fight me on this) for embracing the persona of a stereotypically wealthy middleaged lady. Dr. Vida exudes glam to the point that her flamboyance is compared to a certain first lady who uses money she shouldn’t use to buy very expensive Birkins (aha, you know who I’m talking about). But what is this enigma behind the fame of this woman? What makes Dr. Vida so popular if she’s so annoying? With a single called ‘I Am Me’, who is she, really?

Born as Hasmizah Othman, Dr. Vida is a Kelantan native who, just like shoe designer Christy Ng, is known for her rags to riches story. According to a source, her lucrative business is not one to go down anytime soon as it has rewarded her a tremendous amount of money to afford a “RM22 million home, 22 luxury homes, over 10 luxury cars, and jewellery,” though she says she likes to hang around in kaftans without makeup on (me too). It’s fair to live the tai tai life – madam in Mandarin – when you have that much money, but there’s actually pain in Dr. Vida’s past not many know about. As reported by a source, the beauty tycoon lost two of her four children in a fire a few years back. However, the schoolteacher-turned-CEO didn’t let that stop her from starting up Vida Beauty and the rest as we all know, is history.

There’s been a rise in independent sellers and brands as of late that stand out in their own scene. While streetwear enthusiasts cling to the rise of local and more affordable options like PMC, local cosmetics have been stepping up their game by recreating trends like liquid lipsticks that can topple international brands, there’s a recurring theme of beauty maintenance, intimate products, and more all under the umbrella term of halal products. To cater to the Muslim majority in Malaysia, halal products have long been in the market as they are a necessity to a demographic that requires something wuḍūʾ-friendly, clean, and pure in production. This is also the exact market that produces a bunch of gimmicky items such as vaginal tightening creams, slimming products, and beauty goods to help women here achieve a certain beauty standard. Other than Vida Beauty, there are many similar local halal brands that offer almost the same type of products. Some popular examples are beauty soaps that claim to smoothen and whiten skin like Pewiit Soap and Ephyra Skin Bar, a type of cream that instantly shrinks fat called i am Sexy Lady, and so many more names I don’t even think I can list out without cringing.

Another extremely popular brand I can name at this very instant is the independently owned Sendayu Tinggi, which gives you everything you need to transform into a beaut. They have just about any kind of beauty products in the form of supplements, creams, makeup, you name it. It is considerably the OG of local halal cosmetics that can go against other popular and mainstream brands like Safi and SimplySiti despite its humble root. To put Vida Beauty in this category is quite misleading because unlike a lot of brands out there, Vida Beauty is relatively new and honestly quite tacky in comparison. There’s also a reason why it is presented that way if you consider these three factors that make Vida Beauty the brand it is today:

Dick move, but it sells. She’s also not the only one who’s doing it, a lot of businesses out there contradict themselves by selling products under the guise of “enhancing what you got.” Dr. Vida knows the market isn’t niche, everyone wants to be fair skinned and what better way to do that than a product that works fast? Qu Puteh is gimmicky but it works when you insert a bunch of testimonials, claims of 45% skin tone reduction in seven days, and Dr. Vida as the ambassador who looks pale in most of her ads despite her glam makeup. Speaking of local celebrities, we are a nation obsessed with fair skin because we idolise people of mixed heritage like Diana Danielle, Maya Karin, and Juliana Evans, who are all partially Caucasian. Go to a local Mydin store and you will find not one but various types of whitening products from so-called natural papaya extract soaps to better-known whitening brands like Fair & Lovely, also deserving of its own column for being a bestseller in India.

Look no further than your neighbourhood healthcare store Watsons, who recently dug a hole for themselves when they released advertisement of the year – inspired by an ancient folktale that sends out a clear message of “fair is beautiful.” To quote Inquirer, “four out of 10 women surveyed in Hong Kong, Malaysia, Philippines, and South Korea used a skin whitening cream,” while Malaysia specifically was reported to have three quarters of men who prefer light skinned women who fall under the category of “Eurasian” or “Pan-Asian-looking.” Not that there’s anything wrong with looking like you’re mixed race, but it’s wrong to prefer one thing over the other because that’s just blatant racism, my friend. But how can we blame the society we live in when the media is oversaturated with the same type of beauty ideal? We can’t. This is why Dr. Vida’s Qu Puteh works so well in a community like ours – because the majority of us have a preference that’s unjustifiable and just like the slogan, Qu Puteh whitens not only the outside but the inside too. Not sure how that works but maximum results, right?

There’s an obsession with divas at the moment and Dr. Vida is unapologetically one

She sports a larger than life personality and she’s not afraid to flaunt her goods through promo videos on social media. She’s also always covered in bling, hot pink, and a tiara fit for a seven-year-old even though she’s a middleaged woman. Dr. Diva doesn’t care what people think about her as long as she makes money and you can see it through her face. In 2016, Dr. Diva expanded her empire beyond beauty products to supporting the Kelantan football team for two seasons. And just recently in May, her Qu Gebu AP Krim was banned by the Health Ministry for having ingredients detrimental to health. To speed up the whitening effects of her products, Dr. Vida incorporated both hydroquinone and tretinoin in her Qu Gebu AP Krim, which causes skin redness, peeling, and sensitivity to sunlight. Her products soon became controversial after reports of harmful ingredients that also include mercury; they were quickly withdrawn from stores for the safety of consumers. Dr. Vida stayed still, and reassured her customers that they’ll be fine since her creams weren’t her main products. Fast forward to now, even when the news of her banned products are fresh, Dr. Vida released the lyrics video for her single called ‘I Am Me’.

The video, which I assume is a distraction to all the controversy surrounding her products, sees Dr. Vida embracing her flashy side. The 46-year-old didn’t release this to start a serious music career, she’s doing this because she has money to spend on advertising and PR, and for someone who has relied on bad press in the past, any press is good press as long as it gets your name out there. Trashy and tacky behaviour present in modern day divas is also a thing if you look at what’s circulating in the media. Why’d you think people enjoy shows like Keeping Up With the Kardashians and Jersey Shore? It’s also present in the drag queen industry and shows like Ru Paul’s Drag Race. Dr. Vida also happens to be the embodiment of a typical rich Malay aunty who has nothing else to do but spoil herself endlessly. Following the likes of music parodies like that annoying ‘Pineapple Pen’ song, ‘I Am Me’ explains who Dr. Vida is via lyrics that rhyme and is easy to understand. People might not know what Vida Beauty is, but they sure know who Datuk Seri Vida is because she’s the face behind the terms “Qu Puteh,” “Sayang, saying, saying,” and now “I am me.” I mean, look at what the public has to say about it (someone even made a Twitter thread on why it’s great and I agree):

As long as she makes money, it’s all good

I doubt any of her current marketing tactics will make us want to buy her products but that’s not the point, the point is for us to keep talking and that’s what everyone is doing now. Behind the irritating slogan and exaggerated personality is a woman who knows she will always be remembered in local media, she is also first and foremost an entrepreneur who is smarter than most people think. In an article by Yahoo, the beauty mastermind opens up about business: “Every time I try to market my brands, it is always with a purpose. I always try to get a new segment of society to recognise my products,” she said. Not one to limit herself, Dr. Vida is a sponsor for various television shows (her commercial often comes out during every ad segment), and her football sponsorship was a big deal not only to support her state’s team, but also to gain more recognition. She spreads her name around because that’s all that matter, because that’s what keeps the money rolling. Dr. Vida also doesn’t believe in hiring a marketing consultant, she’s known to be one herself and has successfully marketed her products in any way she can. As of now, Dr. Vida is planning her own range of mineral water and isotonic drinks, which I think will work out since people are actively buying her products anyway.

Overall, she’s made a fortune from Vida Beauty and will continue to do so with the 400 stockists she has locally and internationally (Singapore and Brunei). In the country’s most conservative state, Dr. Vida painted an entire football arena bright pink and made a football team of macho men do the “Qu Puteh pose,” completely erasing the macho identity for a moment in the Kelantan football team. There’s really a bunch of things that Dr. Vida has done like sponsoring the Anugerah Juara Lagu in 2015 and making appearances in television shows speaking fluent Mandarin, to name a few. Whatever it is, she can continue doing any bizarre thing and it’ll probably work out, because she’s the Queen.

Over here we try to make our rants sound a little profesh and entertaining. Did you find out about the whitewashing of the latest Death Note movie? Yeah, you should.