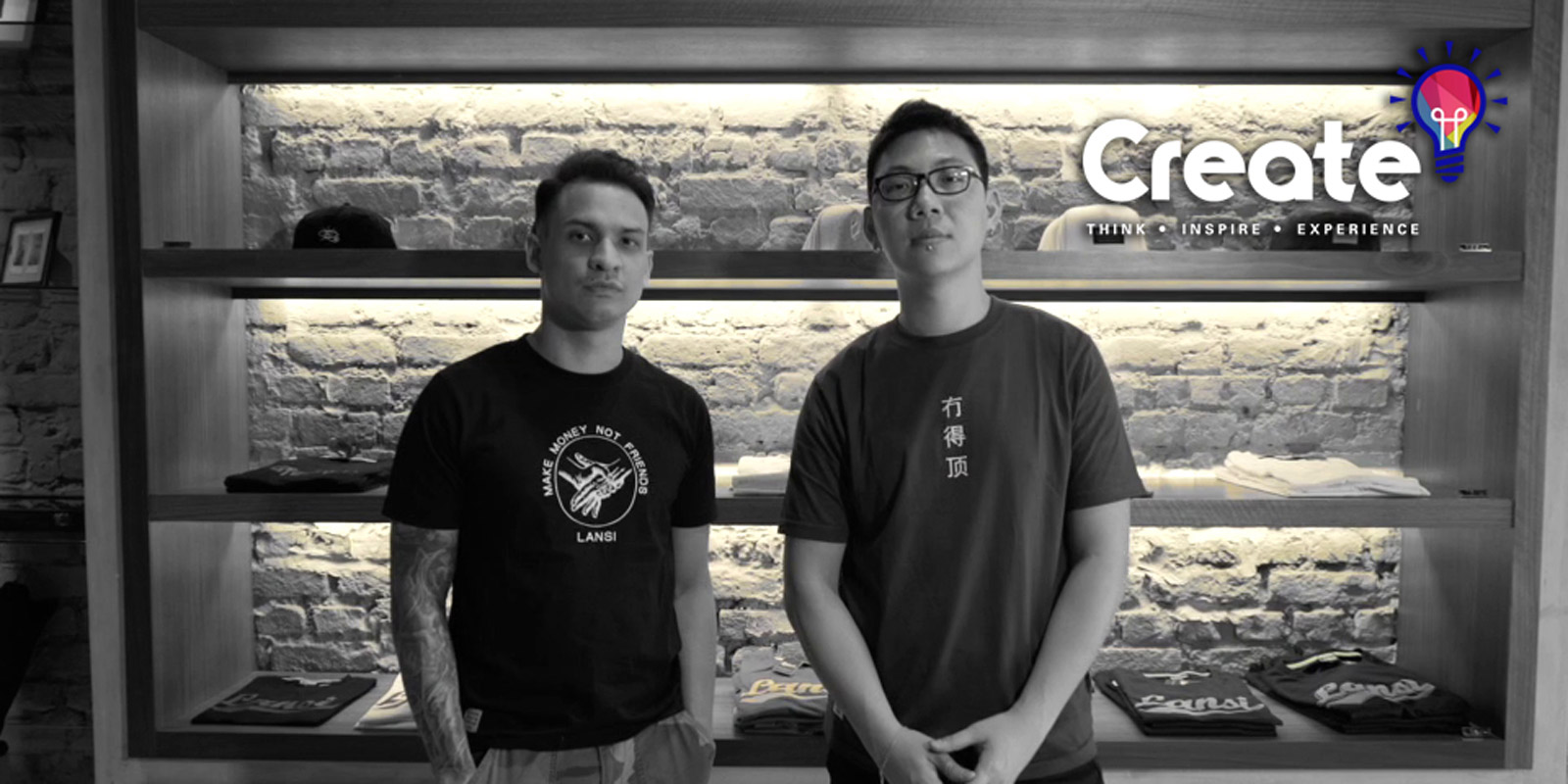 Penang – Pulau Pinang specifically – has seen international scrutiny for some time now, and no, not just for the cliché that is their food (which is admittedly really, really something else). In recent years, beyond just Georgetown’s status as a UNESCO-verified heritage site, it’s seen a cultural renaissance that sees newer music, arts, crafts mushrooming from the vestiges of generations-old shoplots and buildings – a fact the inaugural crowd creation festival, CREATE, did not miss last May (read our report on it here). With Yung Shen of The Swagger Salon – Malaysia’s premier streetwear brand before the word ‘streetwear’ was even in trend here – and Ramsey Westwood – Penang’s own superstar DJ – contributing to their CollaboArt installation, JUICE took the chance to speak to these two proud sons of the island on the festival, Penang as a cultural hub, and tougher subjects like the gentrification of Georgetown.

Can you tell us more about the inaugural CREATE last May? How did both of you manage to be a part of this festival?
Yung Shen CREATE celebrates the power of crowd creation, bringing creative individuals from different backgrounds together for a fun weekend of music, games, food, and of course, art. I was invited to contribute to the CollaboArt wall, while The Swagger Salon was invited to be a merchandise vendor for the event day itself.
Ramsey CREATE is a new festival platform where people come together and be part of a crowd creation festival experience. In conjunction with me being onboard, it blends art and music. I got to be part of this festival as I’m a local Penang DJ whom basically has collaborated with many festivals/events.

What do you think about the idea of crowd creation? What does that mean to both of you?
YS It’s bringing individuals from different creative backgrounds together to create an experience or to bring an idea to life.
R The idea of crowd creation basically involves the attendees alongside the whole festival itself, making it a two-way interaction.

Most people would go “It’s the food!” when asked about Penang’s defining aspect – but for actual natives such as the two of you; what’s emblematic of the island?
YS For me, Penang is home. Where everything has a sense of familiarity to it. It is also where everything moves at a comfortable pace, where the laidback lifestyle allows me to chill and be at ease with my everyday life when I’m back here.
R I would agree that the food is undeniably the defining aspect of Penang, but for myself, it would have to be the people living and breathing in Penang. The culture is diverse and rich in history.

How did you two distil the essence of Penang into your contribution to the CollaboArt wall?
YS What I liked about the CollaboArt wall was that we were given the freedom of expressing our unique individual take on what Penang is to us. So, instead of featuring generic travel blog/tourist brochure content such as heritage buildings or street art, I highlighted my must-have Penang beverage – Pat Poh Peng (which I also listed in my JUICE Dig It! feature many moons ago, heh), hangout spots such as Seawind Cafe, while also shamelessly self-plugging The Swagger Salon Georgetown.
R Well, that’s basically combining ideas of what Penang means to us on a vast scale, from the culture to the food, and of course how Penang means ‘home’ to the both of us.

Ramsey, we’re not familiar with you as an artist, what was it like for you to contribute to the wall?
R Art has always been a passion [that] I’ve embraced since school days. It’s basically something that I do discreetly at my own time of leisure. It was fun, challenging (as [Yung Shen] is obviously way better than I am), and of course fruitful.

And Yung Shen, maybe we just don’t know about it, but we haven’t seen much graffiti work from you lately – why CREATE now?
YS My last actual graffiti piece was a commissioned job for Coca-Cola in conjunction with the 2010 FIFA World Cup – that’s how long ago it has been. However the CollaboArt wall for CREATE wasn’t so much of a graffiti feature, but rather a collab between Ramsey and I on what makes Penang unique to us as creative individuals who grew up on the island, which was then translated into an amazing detailed illustration on an 8 x 12 ft wall for the crowd to fill up with colours.

Besides CREATE, Hin Bus Depot Art Centre has hosted several cultural events of the musical and artistic variety – as two Penang creatives, have you noticed any changes to the scene since the centre’s opening?
YS Hin Bus Depot has definitely played an amazing and integral role in elevating the Penang art scene, not only by providing an accessible space for local and international artists alike to exhibit their art to the public, but also by organising world-class street art festivals such as UrbanXchange, which has put Penang on the international map with its finely curated lineup of artists and their captivating artworks. Besides art, Hin Bus Depot also contributes heavily to not only the music scene but also to independent and small businesses.
R The scene has definitely changed in many ways, especially the booming of events and the hunger for more.

Penang has become something of a hub for the arts and all things cultural for the past few years – what about the state currently that contributed to the focus on those two?
YS Penang has always been a cultural melting pot, where many traditional crafts and professions still exist over generations until today, such as hand-painted Chinese calligraphy signage, handmade leather shoemakers, blacksmiths and metalsmiths, and let’s not forget the food. So, it’s only natural that this generation of adult Penangites grew up in a rather artisanal environment – it may not be a family business for all of us, but it would’ve been something we’ve come across at some point in our lives. Therefore, it isn’t surprising to see how art and culture still continue to thrive in this island city despite us moving forward in terms of development.
R It basically helped boost tourism in many aspects.

What do you make of the repurposing of generations-old shoplots into boutique hotels, restaurants, and cafes? (Or even a bus depot into a cultural hub)
YS These generations-old shoplots are just that – shoplots. They were built to house a business, and they have been home to various businesses over the years. Therefore what we are currently experiencing right now is just another wave of businesses taking over a physical outlet, just like what has been happening over the years. People (and businesses) move in and move out eventually. For example, the lot where The Swagger Salon is currently housed in was originally a licensed moneylender (no joke), and before we moved in, it was a home to a glazier/glass-smith. After us, it might be a virtual reality cyber cafe, who knows? For me, as long as the buildings are well-maintained and presentable, repurposing them for different businesses shouldn’t be an issue. Would you rather have abandoned or poorly-maintained heritage buildings all over town?
R I think it is utterly unique to have such transformed venues. It kinda stands out and is out of the norm.

Does it ever get weird seeing so many transplants and tourists nowadays?
YS I think it is a sign of progress and successful growth as a city. Penang is slowly becoming a cultural hub not just for people of all Malaysian ethnicities, but also home to international travellers. It might take a while to get used to seeing a mat salleh chilling in a kopitiam with a bunch of Chinese uncles, but I believe Penang will eventually be a diverse and multi-cultured society in years to come.
R Not entirely. It just makes Penang more international in a way, especially to me.

What’s one thing about Penang that most outsiders don’t know about?
YS Penang lang will never makan the Char Kway Teow that outsiders flock to and queue up to have — no matter how big the prawns are.
R Where to get cheap and good food of course (laughs).

The inaugural CREATE crowd creation festival went down on Saturday 28 May ’16. For a chance to be invited to the next CREATE event, register at www.create.net.my.