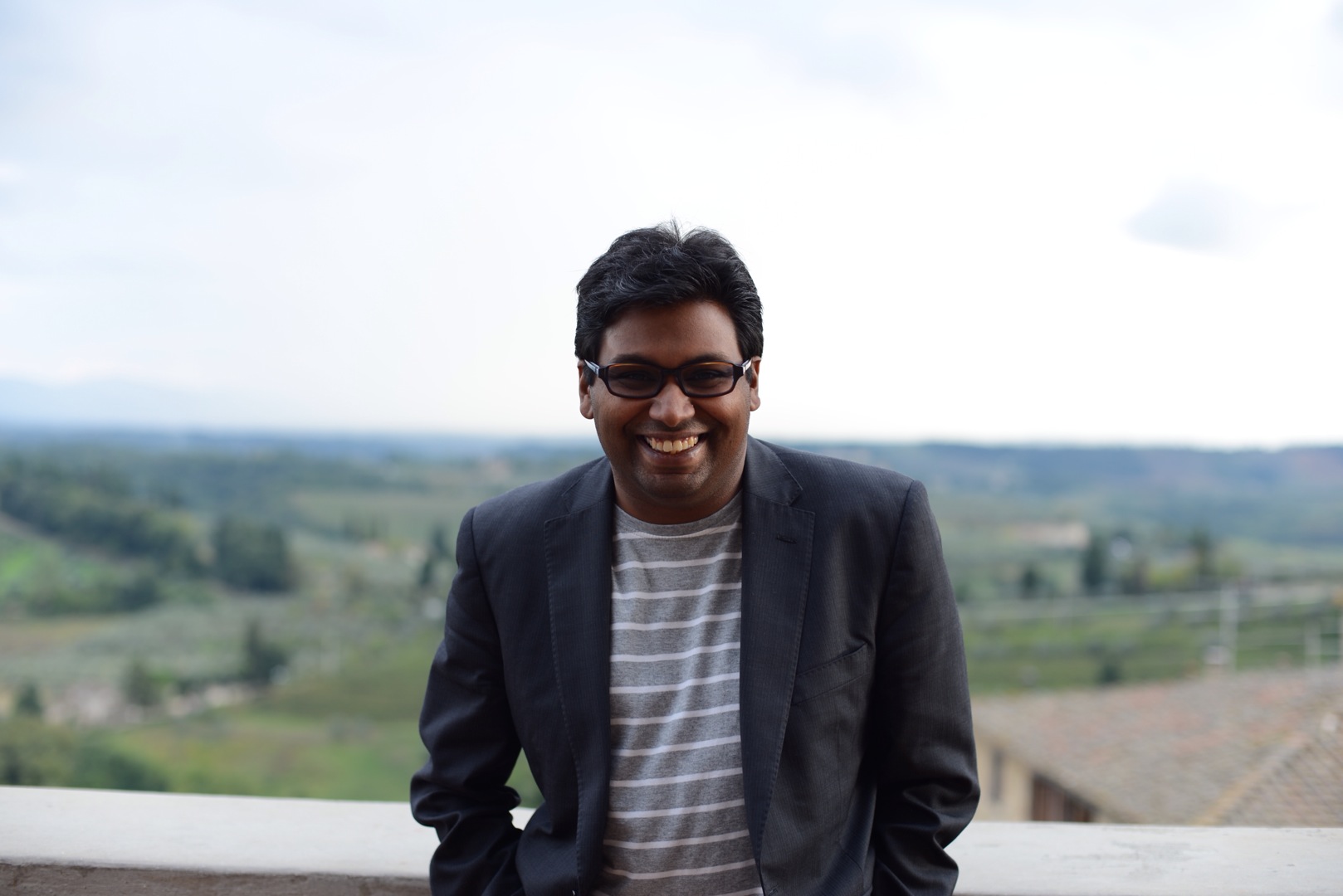 Umapagan Ampikaipakan is the Programme Director of Cooler Lumpur Festival, but we’re sure most urbanites have heard of him via the internet and radio. When not busy organising a festival during this time of the year, he can be heard on BFM discussing all things book-related, seen on a PopTeeVee show satirising one issue or another, or read in his monthly pop culture column for #edGY. JUICE invaded Uma’s personal space to ask him about his ‘dangerous ideas’, print media as a moribund concept, the credibility of online writers and editors, and what his predictions for Batman v. Superman are.

What can we expect to see in this year’s instalment of Cooler Lumpur?
We’re quite heavily focused on the whole debate-talk-issue and we’ve got 18 people coming in from all over the world and all of them will be engaged in conversations that appeal to the Malaysian discourse; everything ranging from friendship, book banning, to the current situation of the Malaysian film industry to music. So it’s not just literature, it’s new ideas in all these things and thus the theme ‘Dangerous Ideas’. When you have the word ‘literary festival’ in your event, people will immediately say “Oh, I don’t read, so I won’t go,” but I think if you look at the programme, they will be very familiar with the conversations we’re having because they have it all the time.

What’s your definition of dangerous?

Anything that shakes up the status quo. It doesn’t have to be controversial, it could just be something that hasn’t been thought of before and I think that’s dangerous because obviously for most people they’ve never seen it that way and will label it as ‘something odd’.

What’s the most dangerous idea you’ve had?
Organising this festival and hoping not to get arrested – I’m joking. We make lots of dangerous decisions in our day-to-day life. Some of them may be very straightforward and routine-like but I think we do make dangerous decisions every day, but it’s become so engrained in our consciousness [that] we just don’t realise it.

Cooler Lumpur is essentially a place to create ideas and solutions. How does one decide which is functional and avoid being placed on the “all talk, no action” shelf?
That’s my biggest takeaway whenever I attend literary festivals: Everyone talks, has a good time, shares great ideas, then they leave and nothing changes. We have a workshop called the Poskod Journalism Campus; it’s to get students and young journalists into a room and expose them to different people with different expertise – documentary filmmakers, journalists from the US talking about social media in journalism – and hopefully when they go back to their office or the drawing board, they have new ideas and go, “I can approach this story this way,” or “I have a new method at telling this story.” There’s an important element of skill development that has to take place. I’m not deluding myself to the fact what a literary festival in Malaysia is — a successful and completely engaged literary festival is about five to 10 years away. Our role is to actually develop the market so that Malaysians realise that there is a place for this, so we’re still in the developmental stage.

What’s the reception been like in the last two years though?
We’re at that stage where parents and young people come to this festival and they go “Oh wow, that’s a viable career choice. This person is famous, he’s being paid lots of money to fly all over the world because he has something genuine to contribute to society and he’s not an accountant, doctor or lawyer.” I think that’s an incredibly important element in this festival, so we’re still very early; it’s a slow build-up to the “all talk, no action” thing, but we’re in the process of teasing them and getting them excited. Poke them and push them in the right direction.

Is it easy to poke Malaysians?
We tend to get very entrenched in our ideas with the way things have been done in the past but most of the time, I think you have to look at changing one mind at a time, and you know even if one person leaves our lectures with their mind blown, that’s a big achievement. I don’t think I’m setting the bar too low…

As a writer and someone that does a lot of political satire, what are your thoughts on the arrest of local cartoonist Zunar and the other journalists that are arrested for sedition?
We’ve invited Zunar to appear in one of our panels. We still have to confirm but I think he will be there if there’s no conflict in the schedule. I don’t believe that there should be a sedition law. I don’t think we should punish people for thoughts and things that they’ve said in this way. This routine is an old-fashioned notion that people of power somehow feel that they need to protect society, if not everything will go to hell. I believe individuals that are in positions of power genuinely believe that to be the case. I’m of the believe and the opinion that society has an incredible power to self-regulate and maybe I’m naïve in thinking the voices of reason will overcome and always shout down the voices of insanity, but we’ve never been given that chance. Society’s never been given the chance to self-regulate. People always cite ‘May 13’ — ‘May 13’, when you really look at it, had absolutely nothing to do with society. It was all about politics and power, so I think we should have a little bit more faith in the people of Malaysia, that they’ve more rationale and have more common sense than that. It’s our job as writers and journalists to speak truth to power. So obviously if ‘power’ is scared, then you must be doing something right.

If you were given the opportunity to write a biography, whose would it be?
Superman because he has the ultimate story; the ultimate alien immigrant who comes to planet Earth and does good in more ways than one, then also becomes a God among human beings and I think it’s very altruistic and self-sacrificial. It’s got an aspirational quality to it, which a lot of our fiction and a lot of our stories these days don’t have. No matter what happens or how much good someone’s doing, our next step is to find a way to tear them down. You can only say nice things about Mandela until someone says “He was a womaniser!” We’re always trying to look for that dark side and it’s safe to say that Superman is one of those characters without a significant dark side.

What do you think of Batman v Superman: Dawn of Justice?
I think it’s going to be godawful. Don’t even get me started on this — I could go on a rant for this and we don’t have enough time right now for me to tell you how the whole colour palette is wrong. Superman is all broody and angry and I’m like, “What is going on?!” Everything’s going dark and there’s so little joy and fun. I mean, they’re superheroes! They’re supposed to save people and have some inspirational qualities to it and that seems lost in all these modern retellings.

The number of writers and webzines in Malaysia is increasing rapidly and most of these people don’t have any experience in editorial but already have the ‘Editor’ title on their business cards. As an established writer, what advice do you have for such individuals?
That’s part of our agenda at the festival because writers in Malaysia don’t have any support structure. The festival is a great place for you to meet other writers and mix with them, so not just support in the sense of workshop skills but also support structure where you have a vibrant community to talk to and engage with and that is really important. The act of writing is a sultry endeavour but I think that process, before all of that happens, needs to be there as well. And the biggest problem is that writers in Malaysia don’t read enough. It’s hands down impossible to write well if you do not read. It’s the key element and I think people just need to read a lot more than they do. Every time I meet a writer and I ask them what they read, they would say, “Oh, I don’t have time to read.” Same goes to the editors — an editor[ship] is an indispensable job in my opinion. I love my editors because they make my stuff sound better than it actually is, and I think that comes with time and training. To find a good editor is difficult, but if you have the opportunity, find workshops whether it’s online or in person, [and] learn. Constantly learn because that’s how you improve your art.

For years now, people have been saying that print’s dying; do you think it’s going to die anytime soon?
No, I don’t think so. Flip of the switch – come 2020 – we’re not going to be reading on tablets and there are no more books, and that there’s some dystopian vision of the future where people are like “Books? What’s that? I’ve never seen a book!” That’s not going to happen anytime soon! However, I think they will take different roles. There’s a very good reason as to why I believe we haven’t embraced reading on tablets and smartphones as much as people thought we would, there’s a certain amount of conditioning gone into us and I think we enjoy paper and holding something. I think there will always be a paperback novel; I call it the ‘single use device’ because when I’m reading a novel, I will not get distracted by a text message or a tweet and I won’t lose my focus because for me reading is the most basic act of discipline. You have to sit down in one place and concentrate from beginning to end and it requires your complete and utter attention – and that’s something these multi screens don’t offer you.