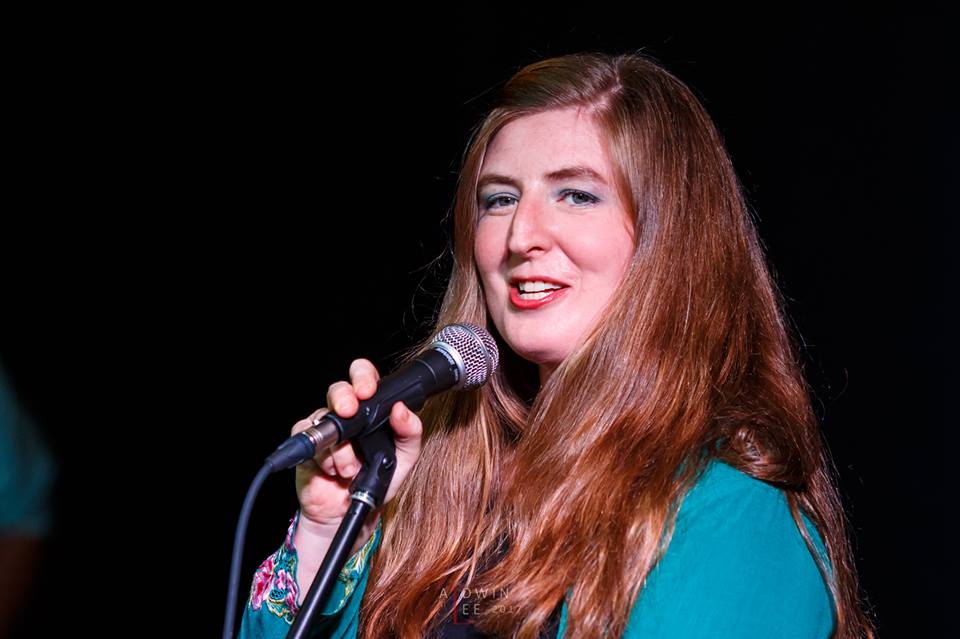 It’s hard to not have a preconceived idea of someone, especially after Giles Fraser, a vicar and The Guardian columnist, called this person “smart, angry, funny, and right on the money.” Cat Brogan opened up very quickly about her experiences both in poetry and in life. My first encounter with the Northern Irish poet was at an LGBT event that Cat hosted with the same enthusiasm displayed as she sat in front of me, talking about the subjects of her writing and the events that she organises around Kuala Lumpur. Here are some of Cat’s advices on creativity for the peeps at JUICE.

When Cat was funded by the Arts Council England and the British Council to do research on spoken word education here, she didn’t just come equipped with her trusty little notebook, her ideas, and her passion; she came and brought people together. “I love to create platforms for people to perform. I love to host, and creating that atmosphere where I can introduce the people right, make sure that the venue is nice, doing the promo properly. I also enjoy doing the zine,” she said, after offering the zines she made for some of her more recent events. “These zines feels like something more permanent, that lives on beyond the night. But I also like the ephemeral-ness, how an event doesn’t last. It’s there and it lives in the memory and I like that also,” explained Cat.

“What I write lives when I perform it. So really I’m a performer, that’s kinda the core of my artistry.”

As a one-woman show, Cat does it all from designing and printing out zines to teaching and performing her poems – not to mention handling events as well – so, which one is her main passion then? She answered, “The one thing for me, is that I am an artist, that’s what I do. Obviously, art brings in so many things, so my primary art form is writing. However, what I write lives when I perform it. So really I’m a performer, that’s kinda the core of my artistry. To perform I need to write, so it’s a bit like chicken and egg, y’know? What comes first? I write to perform, I perform to write.”

When someone does something they love without putting thought on whether or not other people would like it, they can somehow convince other people to love their work as much they do. Or, they just don’t care. “After [going past] 30 years old, you just don’t give a f*ck anymore. You get used to it cause if other people have a problem with what you write, they’re the problem,” explained Cat when we discussed about being vulnerable through your artwork – a struggle all too familiar for artists around the world. Interestingly, part of Cat’s job is to help people open up through poetry. She is an MA Writer/Teacher graduate of Goldsmiths, University of London, and taught as a full time Spoken Word Educator in The Lammas School London before flying around to other countries to teach. But the start of her teaching career was a humble one, and it was in Sunday school.

“I realised that I was an artist even before I admitted that I was one and committed to being one. Teaching was always there. Also as an artist, teaching is what pays the bill,” she admitted. Used to doing what she has to do out of necessity, Cat knew that for most artists, teaching helps them survive. As a way of seeing the brighter side of things, she continued, “It helps you practise and also enriches your art and I think that’s very important. I know when I teach, it makes me a better artist.” That strong IDGAF attitude has also led Cat’s students to achieve great things like winning an award from Adobe and a Young Muslim Writers Award, a huge sense of reward for an educator. “All the poems I got my kids to write, I added them into the computer, into my files, so I sent like 60 poems. They must’ve hated me! Then in 2014, we won the Adobe Youth Voices Award, that was our first music video.”

Growing up in Omagh, Northern Ireland, Cat’s hometown was described as conservative due to the large control that the church has over the area. She even compared Northern Ireland to being the Borneo of the United Kingdom, pointing out the differences in culture and mindset even when the states are all in the same country. Citing Paul Simon’s ‘Graceland’ as her inspiration and source of healing, Cat is all about using art and music for social change. “Yeah, you entertain, like you like to make people laugh and all that, but it’s also an important part of consciousness-raising,” said the 32-year-old. Brought up to be respectful of the environment and socially aware, Cat discovered that one of our country’s biggest obstacles in literature is the division of the art and science stream in public secondary schools. “That’s an issue, the pressure on that. Then you’ve also got government issues where it says on the curriculum that you should write something that’s not political, or sensitive. A lot of the stuff the kids wanna write is political. They wanna talk about 1MDB, they wanna talk about the issues that are affecting them and I think government and schools are quite scared of that. They don’t want free-thinkers, and they don’t want critical thinkers and that’s what writing and creativity allows you to do.”

“It’s ultimately a journey in knowing yourself and using the best part of yourself.”

As a place with a lot of legacy from the conflict in Northern Ireland, West Belfast is a rough neighbourhood where rioting, car theft, and joyriding are rampant. As an attempt to relate to her kids, Cat got her kids to write poems about Honda Civics, doing 360s, and running away from the cops. “You have to pick what it is that’s gonna resonate with them (your audience) and that’s a big part of it, whether it’s teaching or performing and writing.” For someone who has dealt with the same fear that lives in both 10-year-olds and old ladies who lunch and do yoga, Cat has witnessed scepticism in everyone when it comes to poetry. “It’s all about building up that confidence and creating a safe space because one of the most important things about it is not necessarily whether the writing is good or bad. It’s not about whether or not they’re gonna become a poet, it’s that they get to express themselves. Just let it out and then see what it’s like on the page and then whenever they can see that, they’re like, ‘Okay, that’s how I feel!’”

The therapeutic benefits of writing poetry are endless. Many have found solace in it and there are even studies on trauma victims who find it cathartic to write and share. Those who dare to overcome their deepest, darkest fear and moments through writing, know the satisfaction it carries. So when Cat told me about one of her poems, it’s evident that her enlightenment comes from a soul that carries no baggage. “I have a poem about sending my boobs to a WhatsApp group of international poets, I meant to send it to my girlfriend,” she explained in between bits of laughter. “But when you put it in a poem and then you perform it for the first time, the audience loved it! They were just pissing themselves laughing. Something that was so mortifying to me, is like a source of joy and fun for other people.” Another of Cat’s poem titled ‘I Was Fingered by A Terrorist’, was also inspired by a sexual encounter at 15, with a guy who got arrested for terrorism offences.

“So many people don’t even know how they feel! So, how are they supposed to communicate that with somebody else?”

Bringing organisations together with the community via poetry and performance has been one of the things Cat strives to practise, and ultimately, her work has encouraged many to speak out and get in touch with their feelings. “So many people don’t even know how they feel! So, how are they supposed to communicate that with somebody else?” questioned Cat. “They feel confused, hurt, threatened, and then they behave in ways that don’t make sense, that hurt other people because instead of being in touch with themselves, they’re reacting to something else.” Personally understanding how it feels like to be a human punching bag, I nodded. Then Cat said these words to me with curious eyes, “When you’re writing, and even more importantly when you share what you write in a place that’s safe, it’s a really powerful tool with dealing with fear. So many people are just scared all the time – are we living in a world that encourages us to be scared?”