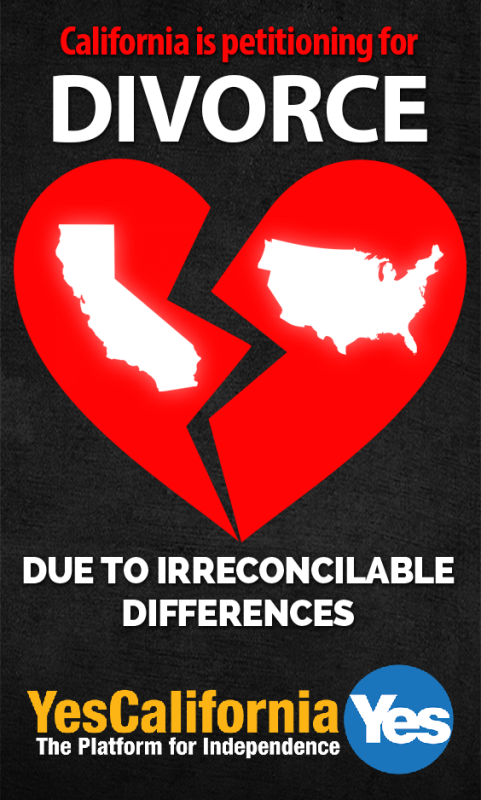 Residents of the state of California have a lot of things going for them. In the past, they’ve changed not just America’s but the world’s view on war and humanity with the liberal and counterculture movements of the ‘60s, created the concept of ‘movie stars’ and the movie industry itself, and led the pursuit of decriminalising marijuana for more than 30 years, which culminated yesterday with the pro-vote taking majority for recreational use of weed. Ah, freedom…

That’s just what everyone already knows. In truth, the state is on a competing level with other first world nations. “As the sixth largest economy in the world, California is more economically powerful than France and has a population larger than Poland. Point by point, California compares and competes with countries, not just the 49 other states,” says Yes California – a popular movement (more than ever now since Trump became President) backed by well-known angel investor Shervin Pishevar. Yes California is pushing for the sunshine state’s secession from the USA — kind of like how Sarawak and Sabah could eventually leave the Federation of Malaysia if they get pissed off enough. Fired up by #brexit earlier this year, and neighbour state Texas’ constant threats to secede themselves since… well, since Texas joined the United States really, #calexit is firing up on the streets with demonstrators locking arms and trending on social media (even Perez Hilton is getting in on it).

The triggers for leaving the States are reasonable enough. Among the nine key points outlined on Yes California’s website are Natural Resources and The Environment. Imagine now, President Trump, a known climate change denier, extracting resources from California. How do you think he’s going to do it? Is he going to be easy and gentle on Mother Earth, or grab her by the pussy?

Peace and Security also plays a part as California doesn’t want to be associated with America’s foreign wars, while Trump’s tough stance on immigration and his infamous wall don’t sit well at all with the states’ diverse-ethnic population. It’s important to note that while all this seems like a miracle, at least in the eyes of Californians who are predominantly Democrat-supporters, actual secession is going to be hard (as hard or harder than getting recreational marijuana legalised in the Reagan ‘80s) as the Federal Government of USA ensured that it has the last say on these matters since after the Civil War.

So will we see an independent nation of California in the future? Maybe baby steps are required to reach a level like that of Scotland’s relation to the UK, first? Whatever the outcome, the Yes California Independence Campaign is on its way to put that referendum on the 2019 ballot.

We can only wait and see (and prep some documents for migration in the meantime — hey, every place needs a Mamak restaurant, okay?) while listening to a couple of songs romanticising the state.