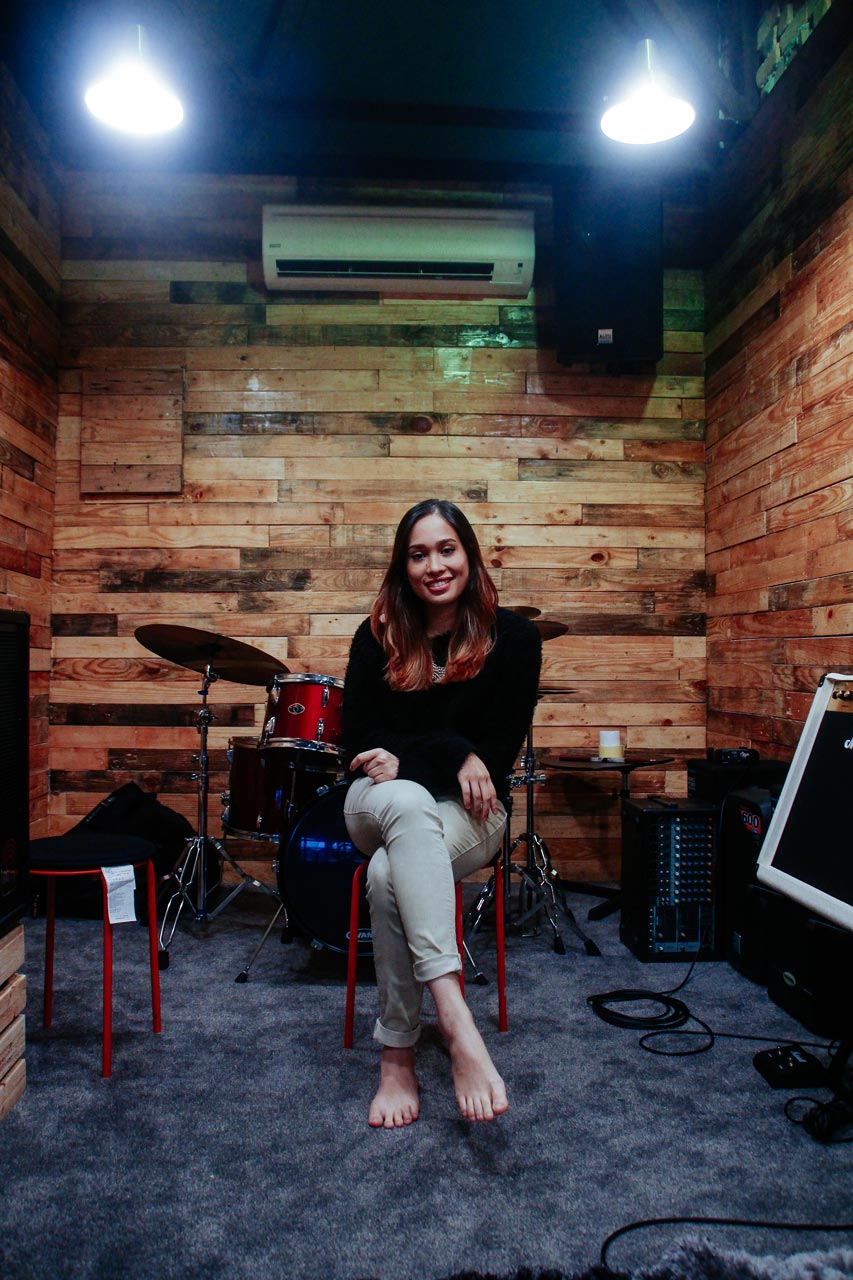 Nabilah Musa – or just Bil Musa as she’s more fondly known as – is currently pursuing a degree in Broadcasting while creating music part-time as a full-fledged artiste signed under Yuna Room Records. That fact should clue you in as to why her sound is similar to the label’s namesake. Glib comparisons aside, with a guest feature on Enterprise’s English-French single ‘Cécile La Lumière’ that got many a 20-something man in the audience during Laneway Singapore swooning, and a debut record out, Bil is set for the inevitable stardom that only a few rare indie acts managed to achieve (read: label boss Yuna). JUICE sat with the songstress after the completion of her finals to chat about why she no longer desires to be part of the film industry, what’s missing in the local music scene, being compared to Yuna, and whether Kendrick Lamar’s verse on Taylor Swift’s ‘Bad Blood’ was relevant or tantamount to mere marketing gimmick.

Congratulations on finishing your last exam! How do you manage to balance out your time to record and study?
Honestly, this was the only ‘crazy’ semester I had because I had to juggle seven subjects. The previous ones weren’t as crazy but I still had classes from 8am up to 6pm, then I’d go to the studio until 3am, but that was just during recording. So when we wrapped up our studio time, everything was quite chill. I’d have shows on the weekend and it wasn’t that busy.

What was it about the film industry that you couldn’t jive with?
It was the environment, I guess. I was an intern but I wouldn’t say I was pushed into a lot of things, I just felt like it was very busy and kecoh. I like to be chilled and not rushed, so that was a turn off for me.

Have you always had an interest in music?
I’ve always liked music but I wasn’t interested in going into the industry until Yuna’s manager approached me. Her manager discovered me while I was performing at my friend’s brother’s wedding.

And they say artistes are most likely to be scooped during open mic nights… What’s being signed to Yuna Room Records like?
It’s been crazy! Sometimes I forget that I’m under Yuna who’s a huge deal and is spreading her music all over the US — which is something I plan on doing as well. I definitely want to expand my music — I think I get a lot of shows just based on me being signed under her label, which is really good but I hope that in the future I won’t be under her shadow.

Yeah, there are a lot of comparisons between the two of you more so because you sound a lot like her. Do you think that’s what caught the manager’s attention?
I don’t know the real reason (laughs), but Yuna said she was looking at a number of artistes to sign but I stood out because I wrote my own songs, and that happened to be one of the requirements that she asked for. She didn’t want people to sing other peoples songs.

How do you intend to break free from being compared to Yuna?
I don’t think there’s a plan because I don’t think about “Okay, I have to make this song different from Yuna,” when I’m writing but I am planning to write songs of a different style. I’m planning to go more electronic and I already have a producer that I’ll work with.

‘Crazy’ can’t be the only word you could use to describe the experience of being under this label, right?
Well, I felt scared because I’m a very private person; my social media accounts were private because I don’t like people whom I didn’t know looking at what I post and her (Yuna’s) manager told me that that lack of privacy is something I’d have to consider, that people will be able to see what I’m doing and all that.

Do you have social anxiety?
No, not anxiety. I have trust issues because I know that even if you don’t think anything of one thing, some people might make a big deal about it. I’m not really scared about people judging me or getting into my private life, but I am worried about my family and friends and how they’ll be affected.

Has there been an incident?
There was one time I posted a photo of my family and I was doing yoga in a resort we went to and this religious guy was like, “Yoga is haram!” That was it. The other thing I was scared of before being signed to the label is that I take my studies very seriously and I was worried that it’d clash with studio time. My dad said that if I failed any subjects or didn’t do well, then I’d have to stop music. And my dad is not the “Oh you passed, that’s great!” kind of dad, he’s like “You have to get a 3.5 CGPA” kind of dad.

That sounds like a good way to be disciplined.
Yeah! It definitely motivated me to wake up for 8am classes, which are the worst (laughs).

How did you get into songwriting?
When I played the piano — I wasn’t even interested in playing the piano, my mum forced me to — sometimes I’d sit at the piano and start writing a song; I think my songwriting came from me liking to write. I love writing!

How did you get to playing the main arsenal of every singer-songwriter; guitar?
I picked up the guitar and ukulele through YouTube. I think if you play the piano, it’s pretty easy to pick up any other instrument because you learn the basics of music.

Having been writing since your school days, with one song even composed during that time, how did you decide to use the six songs on your EP?
I think because those songs were definite and ones I completed at the time, and the others were more personal? Other songs were simple songs that I wrote for my friends’ birthdays and the arrangements were completed.

With your studies done now, when will you start recording again?
I’m not sure, but there’s a song that I’m planning to record as a single, it’s called ‘Thunder Flower’ [although] it wasn’t written by me. It was written by a friend who wrote it for his current girlfriend, and that happened to be my cousin. He said I could do anything with it, so I figured out the arrangements and played it for my friends and bandmates and became a huge hit amongst them. They kept saying that I had to record it, so I’m pretty excited to go about doing that that. It should be out sometime this year.

Is that how you decide on which songs to use? Like they were determined by how your friends receive it?
It’s usually like that. Usually the songs that I really like are the ones they really like as well.

What was the artistic process of your EP like? Did you have a theme or was it a ‘go with the flow’ type thing?
I didn’t have a theme ‘cos I actually wrote the songs in a separated time frame. I wrote one when I was 17… 18… 19… there’s no theme but my style of writing is that I tell stories. As you can see from my EP, it’s mostly about romance, but I do write about other things — I have written songs about family members. Mostly emotion-based songs.

How did you get your singing voice?
I think it’s from most of the people I used to listen to in high school like Lykke Li — she was probably the first person I listened to and I told myself that if I sang, I’d have to have a distinct style of singing and she taught me that — then there’s Ingrid Michaelson.

And you sing in French as well, yes? Do you actually speak the language?
I speak French but it’s rusty. After SPM, I took a year off [studying] and took intensive French classes because my mum and her aunty did it as well. My mum said to me, “You’re good in languages, so you might as well pick up French.” So I did that and that’s why at the end of my French course I decided to write a French song just to try it out. I have tried to write more songs in French but my vocabulary and grammar are really rusty. If I do write a song in French, I’d have to double check with my old lecturers.

What’s something people least expect you to do?
I don’t think people think I can rap. I have a group of friends — six girls — and we exchange CDs every so often, and when I was 17, I made a CD for them and most of them were songs that I made. A few were like birthday songs and a few were rap songs that I rapped myself. It’s really funny but it’s not legit rapping…

You tweeted that you didn’t like random rapping in songs, which song were you referring to? We felt the same about Kendrick Lamar’s appearance on ‘Bad Blood’…
Yes! I was just about to say that. Kendrick Lamar is a good rapper and he writes really amazing songs, so when his rap was on Taylor Swift’s song there was no [meaning]… it was just for marketing. It didn’t actually add anything to the song.

What do you think is lacking in the music industry right now?
Balls. There are artistes who are brave and unique but for the most part, they’re just looking to make it big – there’s nothing different about their sound. I like it when I see local artistes that are more ballsy with their music and when they don’t care about what people say. One of the artistes is The Venopian Solitude. When you listen to her music, it’s not really catchy or something that everyone would listen to, but you can tell it’s really her style and that it comes from her.