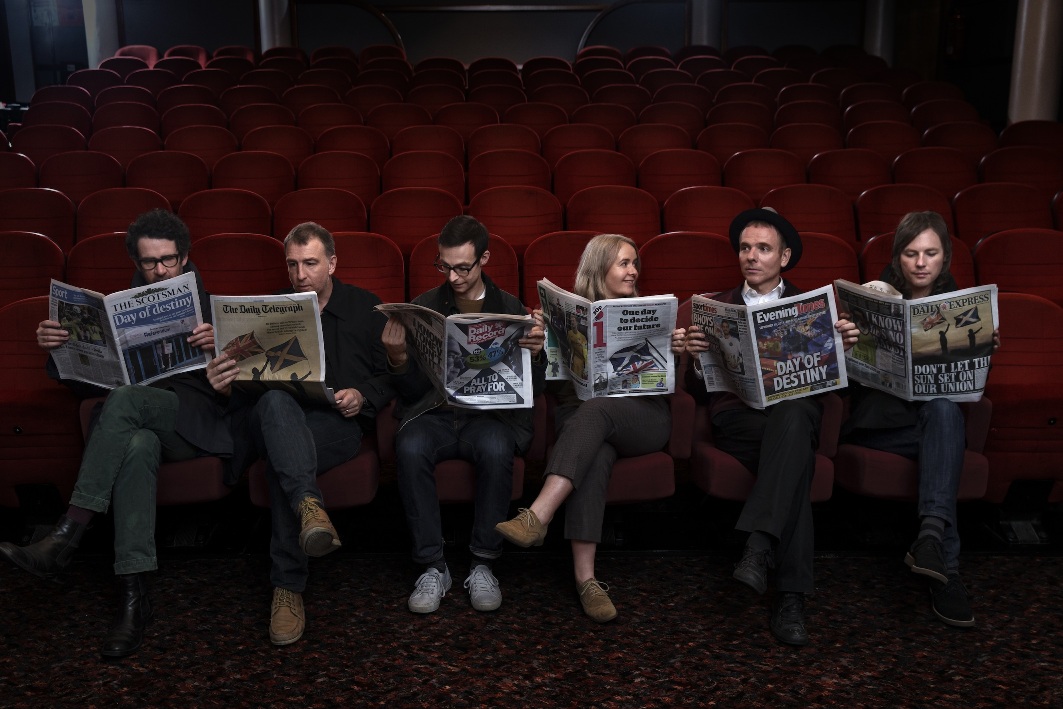 Although reduced to a sextet, Scottish indie poppers Belle and Sebastian have been at it since 1996. And now nine full-length albums in, they don’t intend to stop and let still nubile twee bands dominate the blogosphere anytime soon – their last release Girls in Peacetime Want to Dance (January 2015) might have a title that suggested some political aspiration (a trap older bands keep falling into), but as it turned out, the focus was really just on ‘dance’. Having performed at The Gathering in Singapore last February, JUICE bore witness to this emphasis – old-timers and soft-skinned punters boogied together. Before that though, we managed to convince Sarah Martin (keyboards/electric and acoustic guitar/vocals) and Chris Geddes (keyboards) to chat with us.

With its Cold War propaganda-style title, is Girls in Peacetime Want to Dance really Belle and Sebastian writing about politics?
Sarah I’d say no, because somebody trying to make a political record is also perhaps somebody making a boring record. It’s what people do when they’ve given up on life and romance. But I think I have become more aware of the outside world – you start looking around you a bit more when you’re older. I was interested in similar characters, but perhaps more considerate towards how the political world affects them.

But Scotland was at the crossroads recently with the referendum taking place to see if the people there wanted independence from Great Britain – was the band not sucked in by the um, political ‘excitement’?
S Sure, we’re all excited about it and even before the referendum took place, we had publicly made it clear that we’re all behind it. But being a patriotic Scotsman and writing good songs don’t necessarily fall so comfortably in place, don’t you think so? We reckon it’s better for us to stick to what we’re pretty decent at: Writing about the people that we see around us living their own unique lives that are so pretty.

Fair enough. Where did the inspiration for this new record’s title come from then?
S It’s one which has been hanging around [for some time]. Stuart [Murdoch] (lead singer/songwriter) writes down song titles and album titles every day of his life and he’s have been doing that since 1996. I remember having the title for ‘Stars Of Track And Field’ for years from before it actually became a song. But this title definitely paints a little picture for you.

Is it a more danceable album perhaps?
Chris Funny you should mention that because it is, really. You’ll see later (at The Gathering) that we’ve got another keyboardist on stage to give the tunes a bit more of a danceable buzz. But we’ve always held that (keys) important in our songcraft – that’s why they hired me to begin with!

Just barely two months after the release of your new record and the band is already touring. Tell us, is this part of the world increasingly more important for bands like yourselves?
C It’s not so much of choosing which music audience is better, or favouring one party over the other. It’s more about timing really – the opportunity to come to Singapore pretty much fell onto our laps unexpectedly. And seeing that we had such a great time playing here a few years ago, albeit at a much smaller venue, we just thought that everyone would apreciate this bit of adventure, eh? What’s more, someone told us that a lot of people are here at Fort Canning because of the headlining band, so who are we to argue with that? (Laughs)

Belle and Sebastian played at The Gathering, Singapore on Saturday 14 February ’15.