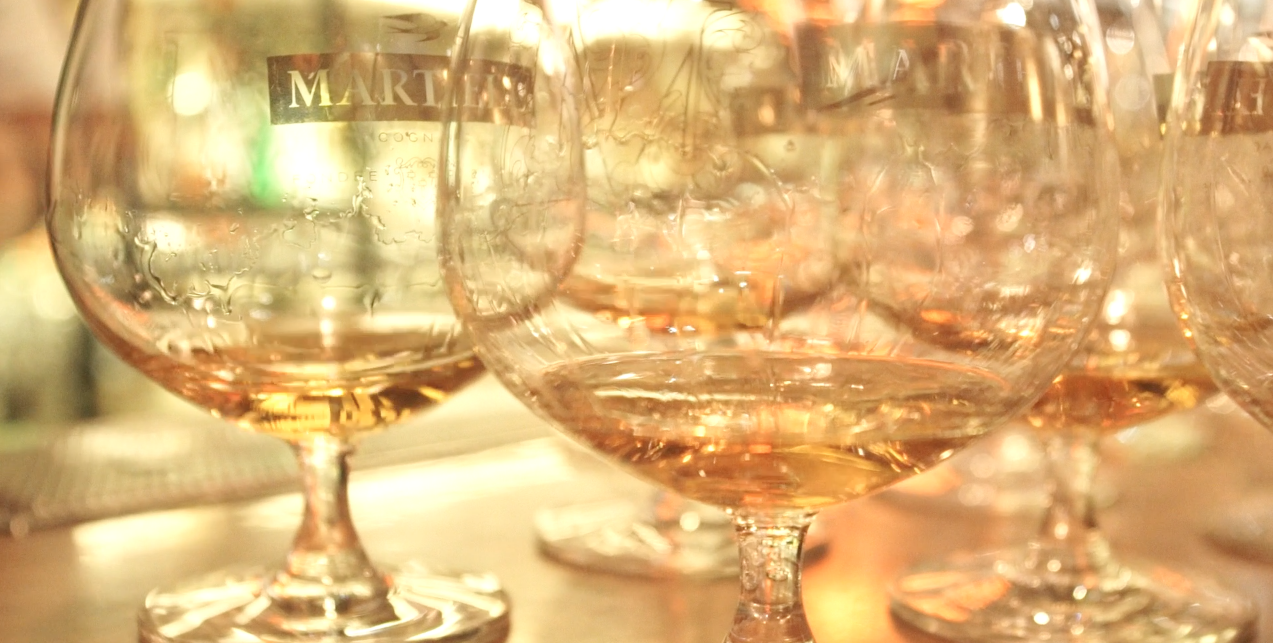 On Wednesday, we wear pink and drink – which is exactly what we did a few weeks ago when we were invited to one of Martell’s unofficial classrooms, PS150, for a brief history session on the legacy of its brand. There was also two Martell cognac tastings — Martell NCF and Martell VSOP — followed by PS150’s head bartender creating special signature cocktails using the Martell NCF and ending the day by trying our hand at bartending.

The evening began with Pierre Boyer’s — Martell’s ambassador — introduction on how Martell’s cognac is produced. He shared that its main ingredient are white grapes that are turned into wine and then distilled twice. The first round of distillation is meant to turn it to ‘the water of life’ or more formally known as the Eau-de-vie — which is essentially how drinkers look at alcohol in general. Once it has become the ‘water of life’, it is then aged in French oak barrels for years and blended to create the cognac we are able to enjoy today. It’s a delicate process that’s been practised since it was founded in the 1700s.

Martell removes any sediment that’s left from its wine stage, which is mainly done to avoid the cognac from tasting bitter or soapy. Speaking of its taste, Martell cognac’s prominent undertones are vanilla, candied fruits, and delicate spices. Its mellowness is subtle and is overall an exceptionally smooth cognac to drink.

After noting down the basic facts, we moved on to tasting; we tried Martell’s V.S.O.P line as well as the latest addition to the cognac family, the NCF (non-chill filtered). Here, we learned that Martell used to be one of the key bases for cocktails in the 19th and early 20th century but as time passed, new trends were created and Martell’s reputation for being associated to cocktails lessened and the brand became known to be more of a ‘serious’ drink; a perception the brand is working on shifting. It was on this note that we proceeded to the bar to learn how to make cocktails using the new Martell NCF.

PS150’s Angel Ng created a four-part drink menu exclusively curated for this event. It included two classic cocktails, the Sidecar and Brandy Alexender, and two signature cocktails with Southeast Asian-influenced ingredients such as tuak, asamboi, gula Melaka, and coconut crème. The first was called Sidecar Around Asia (Martell NCF, tuak, asamboi syrup, lemon, and orange) and the second being Nyonya Brandy (Martell NCF, gula melaka, coconut cream, salt, and crème de cacao blanco). We had the opportunity to try making the drinks ourselves, and we can confidently announce that we won’t be quitting our day jobs to join the F&B industry anytime soon.

After indulging in a few cocktails, our learning session with Pierre continued where he shared that most of Martell’s consumers are from the Asian region. This led to the house’s decision to launch the NCF line in Malaysia, Singapore, and Taiwan first before taking it to other parts of the world. So, for anyone who’s curious to try cognac-based cocktails, be sure to head to PS150 or Hyde to taste the liquid equivalent of elegance — it’s not as intimidating as you think it is.

The Martell cocktail workshop featuring its ambassador Pierre Boyer went down on Wednesday 14 June ’17 at PS150.