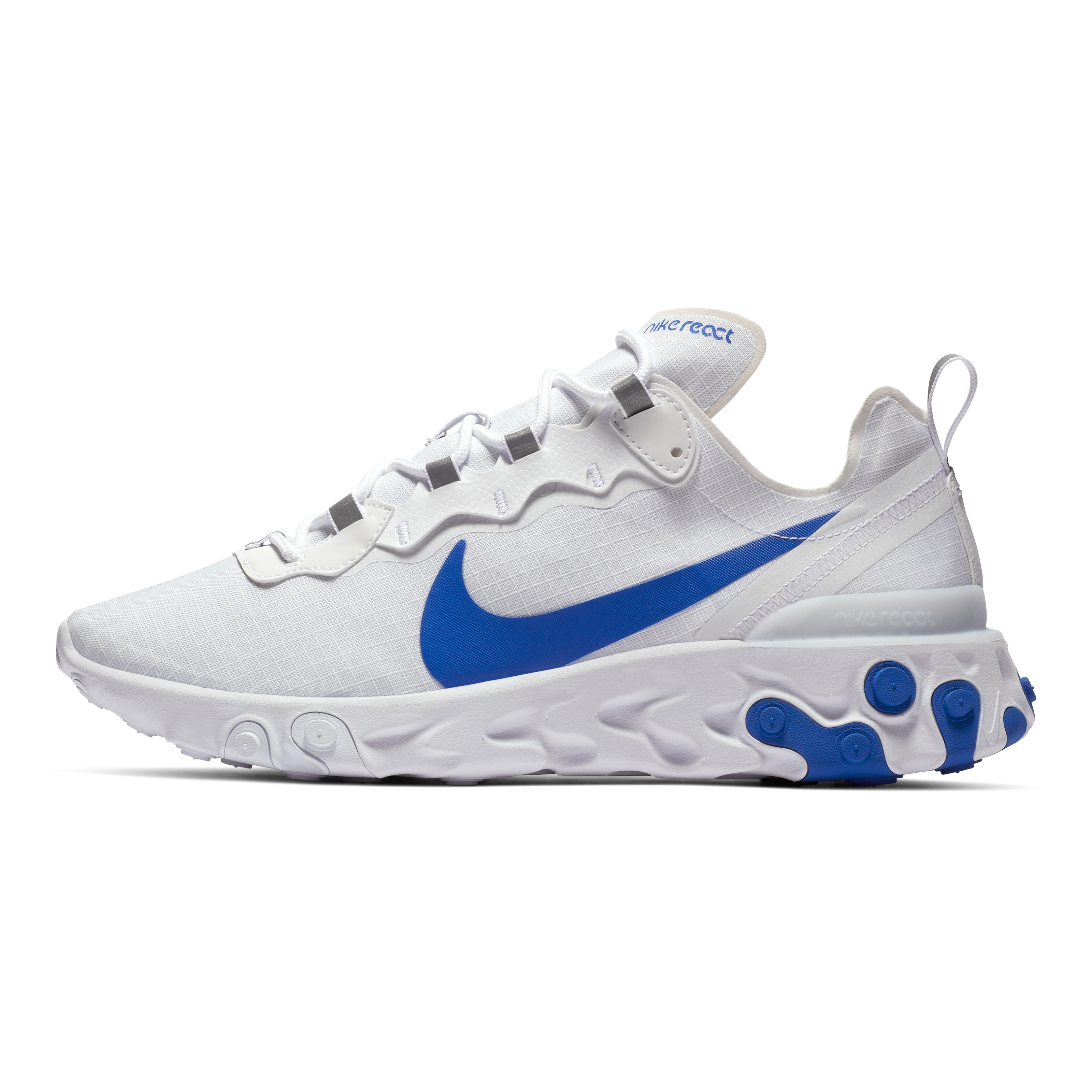 As someone who travels a lot and does his fair share of gym time (okay, less than I would like to), it has always been rooted in my mind that one only needs two pairs of shoes—one for leisure and one for exercising. Formalwear aside, I’m all for minimalism as our shoe cabinet has limited space after making room for my wife’s collection, which I imagine, rivals Rosmah’s.

My problem is that I have never been able to fine a pair that compliments each other. I would always dread putting on my trainers after a day in the office with my casual sneakers. And on days when I actually get to put in enough hours at the gym, it feels strange to suddenly switch to casual shoes.

It has been awhile since I tried on my last pair of Nike, so I was quite enthusiastic about trying out the recently released Nike React Element 55 and laceless Phantom React Flyknit. I decided to put both shoes to test in situations that I’m most familiar with—travel and the gym. 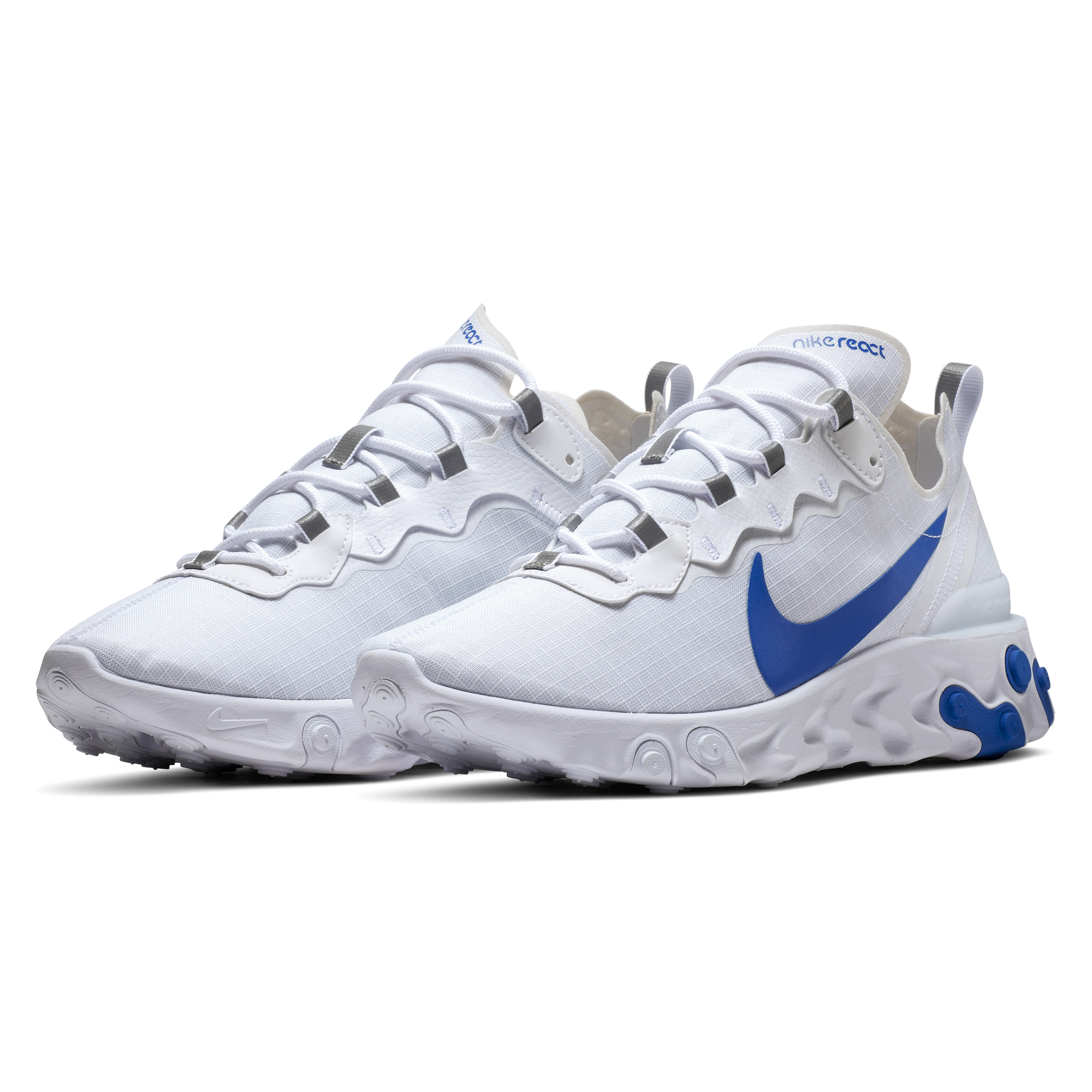 I tested my Nike React Element 55 on a recent media trip to Marina Bay Sands which included tours of various F&B and entertainment outlets, the underground city that hosts the hotel and casino’s 10,000 workers, and 3 different exhibitions at the Science & Arts Museum, not to mention dashing about Changi Airport and Changi Jewel. Needless to say, hours of walking and standing were involved.

The first thing I realised about the React Element 55, is that they fit like second skin and practically weigh nothing. I didn’t need to worry about extra weight if I carried them in my baggage but for this occasion, I decided to wear them on the plane. They felt comfortable and did not restrict blood flow like my old pair of casual sneakers. I had them laced up the whole way there and back. 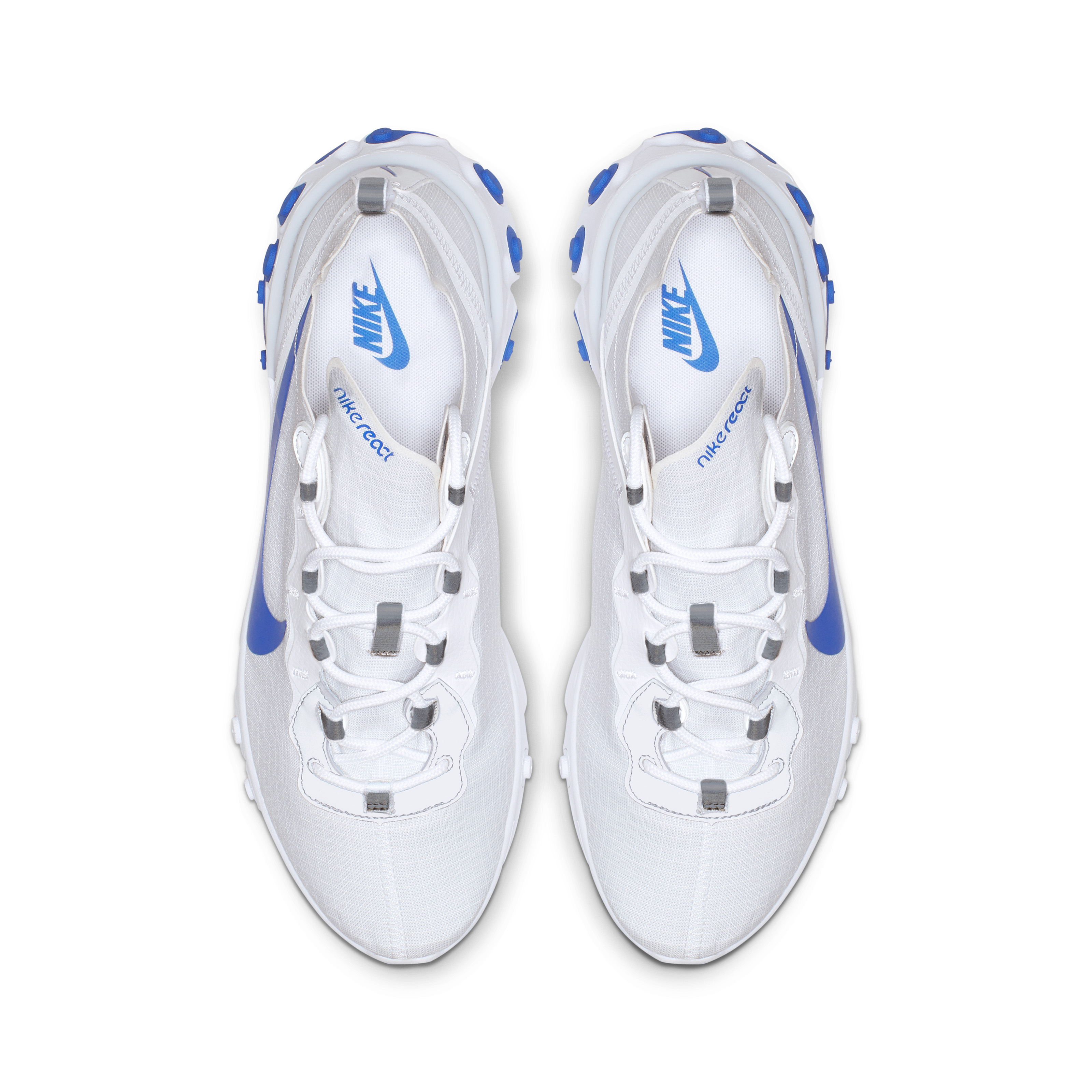 As the down-to-earth follow up to the funkier React Element 87, the 55’s upper is made from more conventional mesh and suede, which is constructed from an ultra-breathable mesh accented by exposed stitching, exterior heel taping and trail running laces. Inspired by the Nike Internationalist (notably the eyestay and heel clip), the React Element 55 enhances natural feet movement—my feet were free to do those intuitive bends, in-shoe stretches and toe-wiggles that happen when in casual mode. Fitting the 55’s on and taking them off was also easy with the sewn on hook at the collar and the flexible upper. At first, walking about in these kicks was a bit awkward as I was not used to the springiness, but after a short stroll, my body got in tune with the returned energy and I noticed my posture improving while walking. Seated on Nike React Foam, I found the 55’s loose design pattern for the foam, aside from giving an understated edgy-look, suitable for the many casual positions I had my feet in from slanting on the sides, to up on the heels. 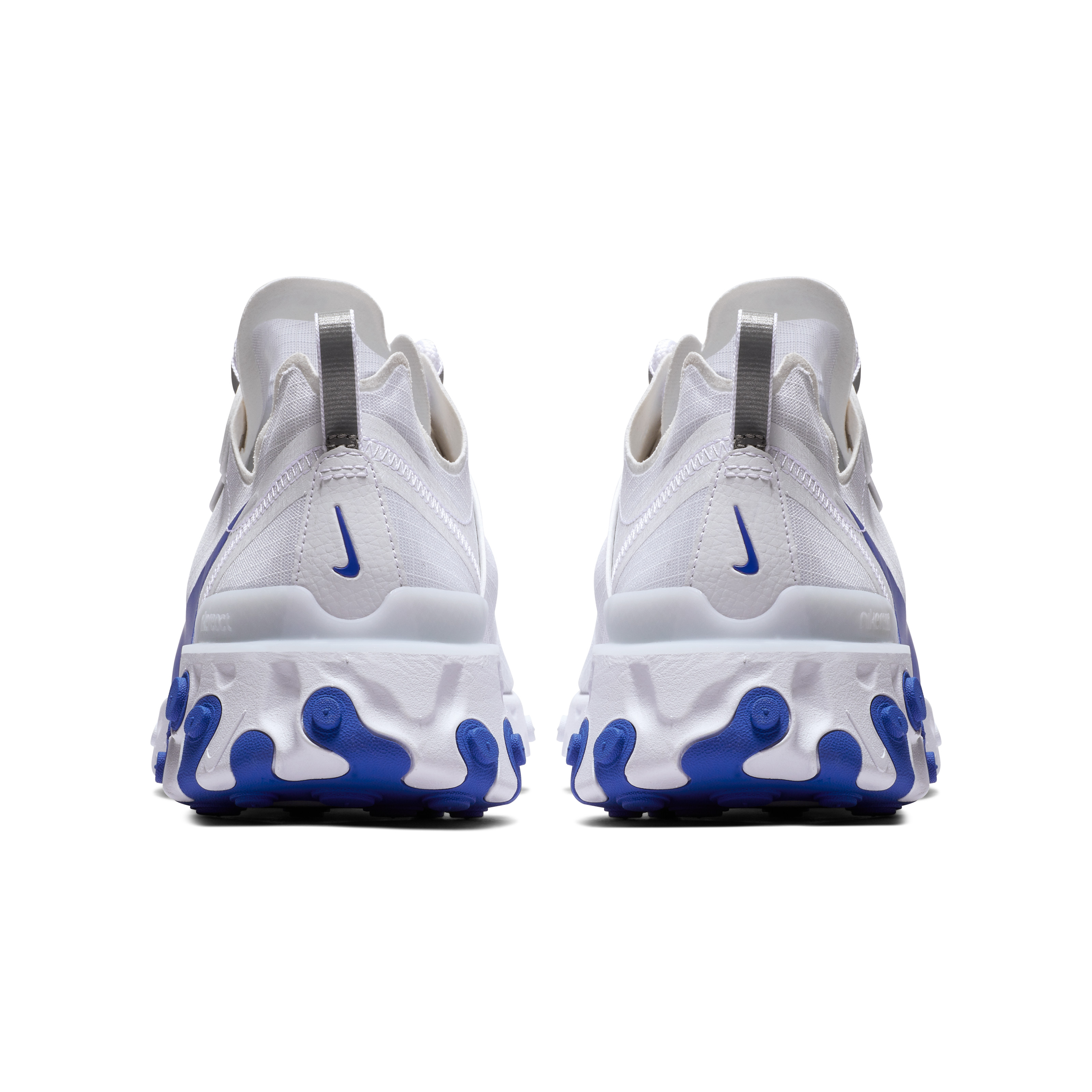 The 55’s tongue, like the rest of the upper is thin and flexible with a unique cutting that allows it to stay in place even with drastic movement. I did not get any abrasions that usually come with shoes that use thin materials as the 55’s construct is soft and easy on the skin. I would even recommend these shoes for light-workout sessions on the treadmill.

There are a lot more features in the 55’s which I have yet to explore, or maybe I missed out on them as they felt so natural. It was as though I had owned this pair of sneakers my whole life.

I have never owned a pair of laceless trainers which made me even more intrigued by the Phantom React Flyknit. Slipping them on with the help of the hooks on the tongue and ankle, I initially felt a slight squeeze at the front-sides of my feet (note: I have wide feet) which quickly wore off as I used the shoes. Although they were a new pair of trainers fresh out of the box, it took minimal effort for the React Flyknit to customise to my feet shape through use—like by the end of my first gym session. 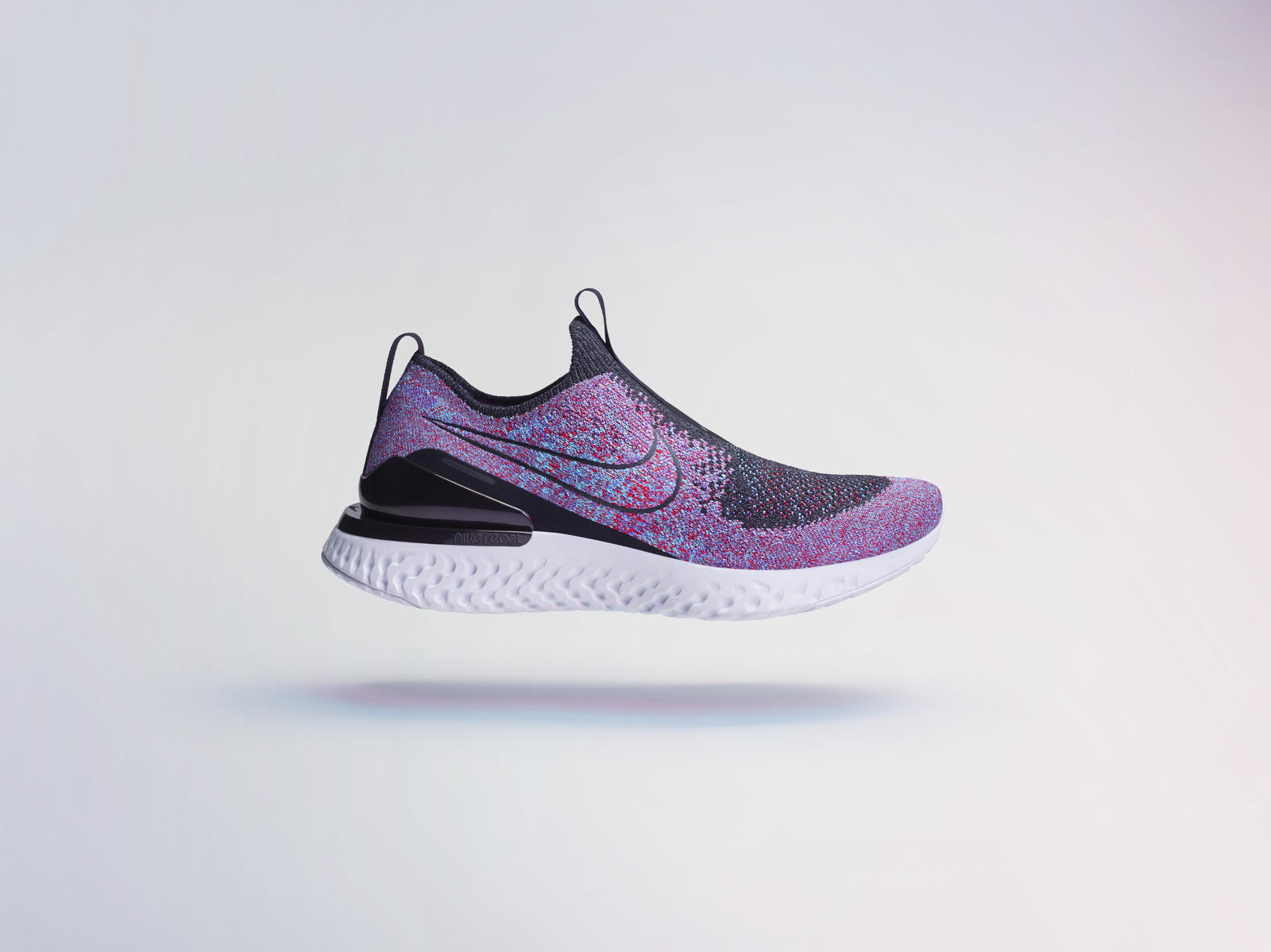 The reason behind the snugness of the Phantom React Flyknit is its upper’s material. Created with a mix of elastic and non-elastic Flyknit yarns, the shoe becomes more comfortable with use. Often, the problem with running shoes is that they’re too rigid—to withstand high impact, the shoe’s material has to be tough, sacrificing the user’s comfort. But the Phantom React Flyknit’s construct rectifies this age-old problem. Elastic Flyknit yarns by the tongue and along the collar allows the foot to move seamlessly while non-elastic yarns, which replace traditional lace hooks, offer structure and stability. After my second trip to the gym, they became worn in enough to wear to the office while maintaining their elasticity. By getting rid of the laces, Nike has eliminated a major setback for me. I’d usually have to do up my laces several times during a run with my old trainers. Not only is this tedious but it curbs my momentum even before I hit the gym, when I’m putting on my old running shoes and attempting to keep them that way—in the right spot of tightness. Now, before lethargy kicks in, I’m already out the door in shoes that adjust to my feet. As every runner knows, the sole is the most important part of a performance shoe. To ensure that our feet has the best comfort and protection for extremities, Nike spent the past 3 years developing their answer to high impact. The Nike React sole foam is tested on runners, mapping out the most common stress points and providing the right amount of foam at these crucial areas to give adequate impact absorption and bounce back.

While both the React Element 55 and Phantom React Flyknit utilise the Nike React Foam, the running silhouette sole’s tight and stiffer pattern gives extra grip and stability (especially important if you’re lifting weights) as compared to the bounce back I got from the 55’s.

On one evening, I decided to test my Flyknit’s outdoors on a slope I usually walk down and jog up. While it’s not recommended to run downhill, I did it anyway for short bursts to push the shoes. I found that I experienced none of the pain from impact that I would have gotten if I were using my old trainers. As far as sole foams go, you can’t f- with Nike React Foam. 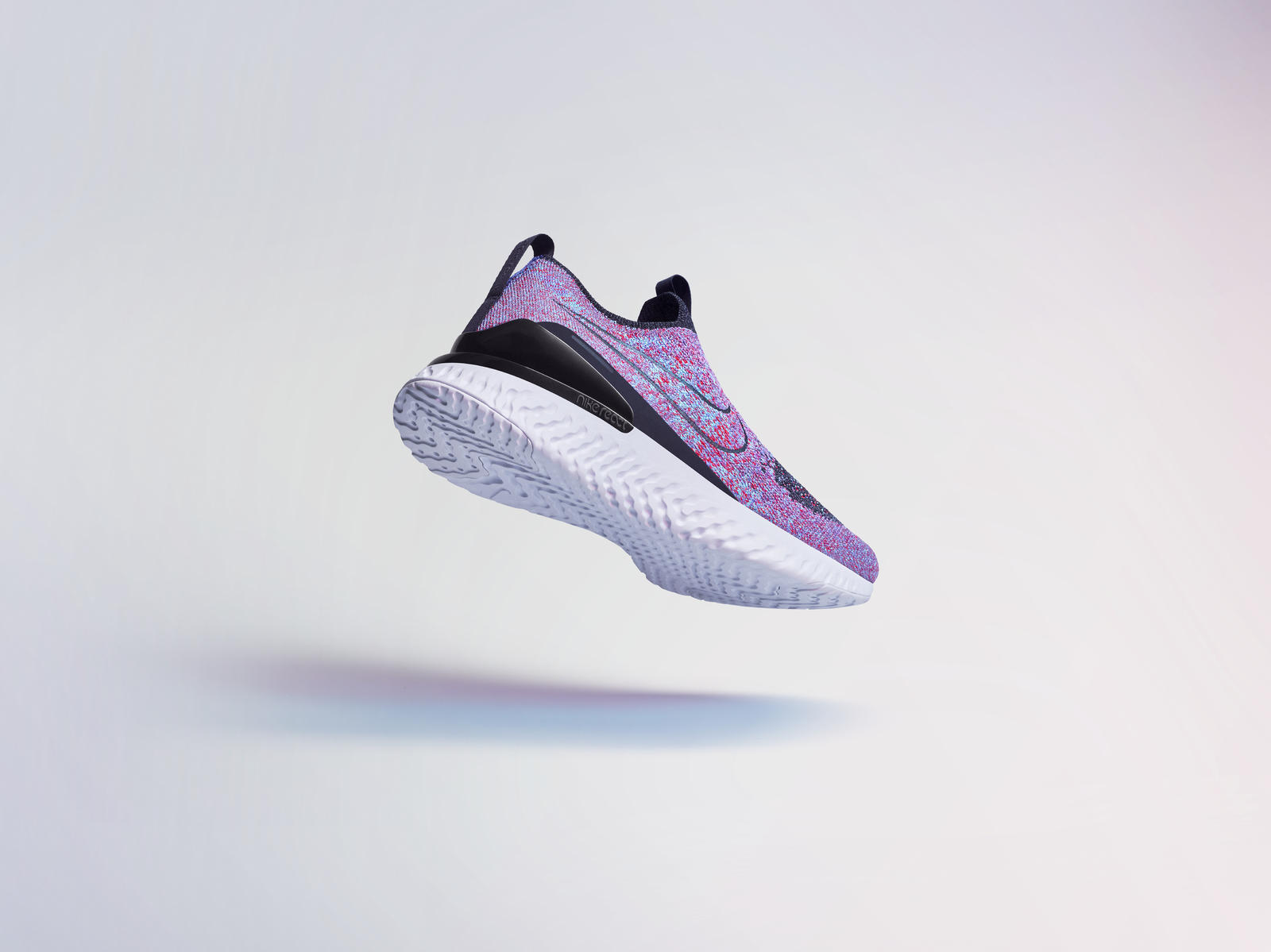 The minimal look of the Flyknit make them versatile enough to be worn on casual occasions. Though the 55’s are lighter, the Flyknit isn’t at all bulkier. I would recommend wearing thin socks with the Flyknit for maximum comfort since the React Foam got you covered from impact injuries.

Both the React Element 55 and Phantom React Flyknit are great shoes that are loosely interchangeable. I wouldn’t say that you need to get both of them at one go, but they sure do work well together.

The Nike React Element 55 retails at RM579 and the Nike Phantom Flyknit goes for RM609 at Nike.com and all participating Nike stores nationwide now.