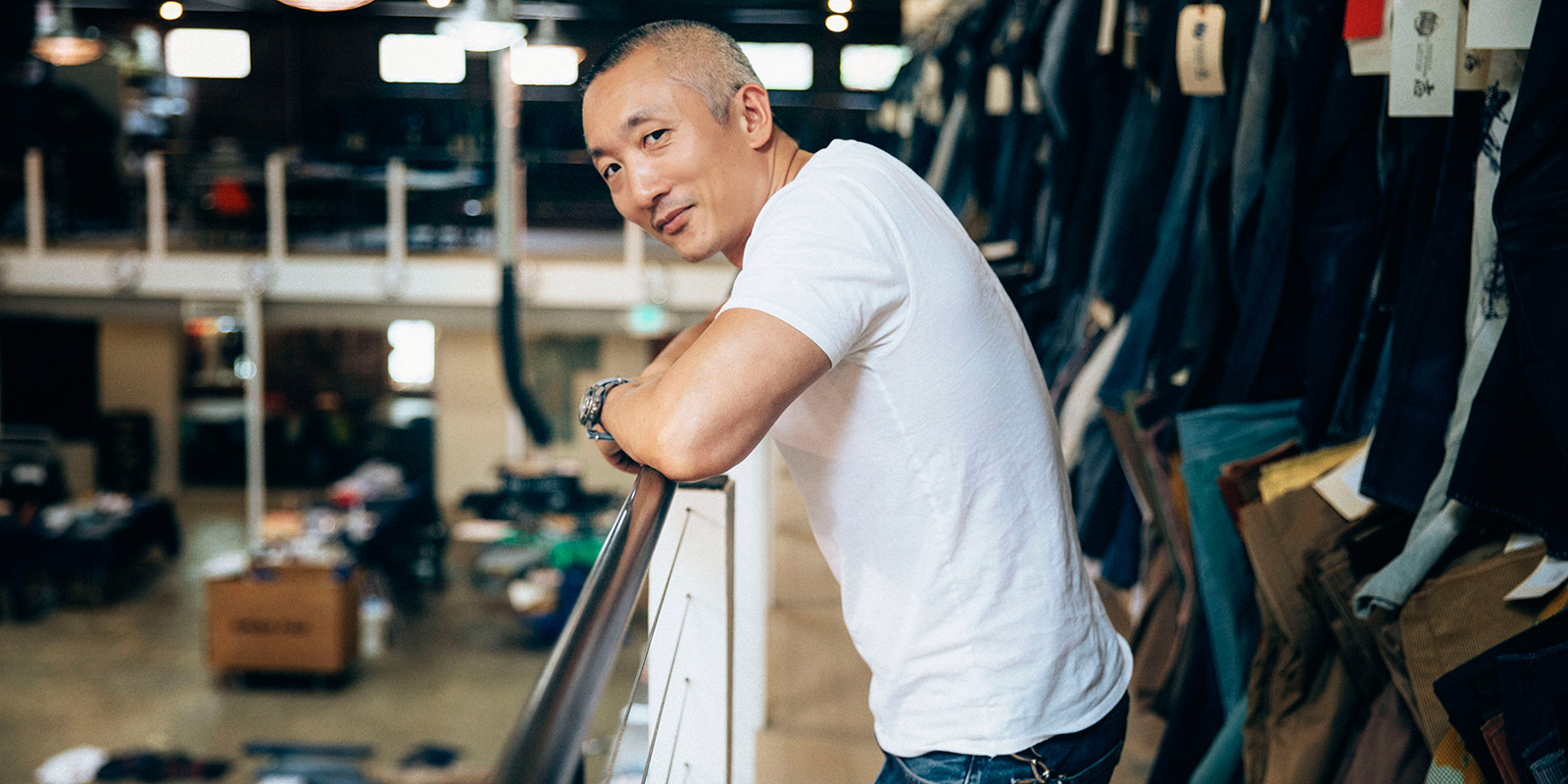 When a consumer is asked to think of a retail brand that’s associated with denim, the first name would be Levi’s®, and if it isn’t, it’s best to brush up on the history of denim. The American denim brand was founded in 1853; for the first half decade of its existence, it appealed mostly to the workingman. Not too long after that though, Levi’s® gained itself a wider audience as ‘modern denim’ soon became a staple piece in everyone’s wardrobe thanks to the likes of Elvis, James Dean, and Marilyn Monroe who wore it regularly.

Since its conception, Levi’s® has managed to maintain its reputation of being the pioneer brand of this particular material – and though times have changed with constant competition from fast fashion brands who have tapped into the market, it hasn’t sacrificed its key principle of remaining relevant as its core belief is that quality will sustain the brand for many more decades to come.

JUICE had the opportunity to speak with Levi’s® Head of Design – and Daniel Craig’s Asian doppelganger – Jonathan Cheung to discuss being bothered by trends, staying creatively nourished, and his favourite quotes.

How did you get involved with the Levi’s® brand?
So, my job immediately prior to Levi’s® was with Giorgio Armani — for almost six years — and during that time, I had the opportunity to do some freelance for Levi’s® in Amsterdam for their premium division, which was called Levi’s® XX, and my first job at Levi’s® was designing Levi’s® ‘Made & Crafted’ — which still exists until today — and I’d be designing on a ping pong table with a pencil and paper.

That’s what people would call utilising their furniture in full. How long did you do that for?
I did that for two and a half years, and then in 2011, I was offered an opportunity to become a merchant here. I was to be involved with strategy and in the financial part of the business of the men’s side, so, Vice President of Merchandising and then my current job — which didn’t exist before — was created. I was very lucky to be the first person to step into this new role and it’s been a privilege.

“… what you have to do is balance the past, the near future, and the far future.”

So, you’re essentially the person that will set the standards for your successor. Speaking of pressure, as the Head of Design, how do you make sure the designs you create are sellable? Levi’s® appeals to a huge audience — globally — so, how do you ensure that its market will be receptive of it?
There’s no magic formula — if there was, everyone would have figured it out. But what you have to do is balance the past, the near future, and the far future. There’s a famous quote by a Canadian ice hockey player named Wayne Gretzky, he said, “You don’t skate to where the puck is, you skate to where the puck is going to be.”

Ooh, wise.
And the secret of his success is that he’d always travel to and anticipate where the puck would be hit to. So, with fashion you’re definitely skating to where the puck is, there’s a part of your line that you’re going to carry on doing and you’re reacting to things that are already happening in the market that are going continue to happen, and there’s the part where you’re anticipating trends, so you’re looking at people on Instagram and they’re beginning to wear flairs — for example — and you feel like flairs are going to happen again, and then the third part is to have control and then you hit the puck to where you want it to go.

What’s a recent project that you’ve applied this to?
The 505C, that wasn’t based off consumer research or past sales, that is based on what we’re excited about. So, we’re going to make a big deal about it and share the excitement. I think Steve Jobs was famously quoted, “Consumers don’t know what they know until you show them.”

“All those subconscious things are really, I would say, deep calculations — that is still data processing, it’s just not in an Excel sheet.”

And now a large population wouldn’t be able to survive without his products.
Exactly, and that’s true for brand new things. You can get data on things people have seen before — you can track those things — if its something very, very new, you just have to trust your professional instinct and your subconscious. All those subconscious things are really, I would say, deep calculations — that is still data processing, it’s just not in an Excel sheet.

If only other managements saw it the same way. So, you are exposed to design all day everyday, how do you ensure that you stay on the ball and that you’re not creatively drained?
It comes a lot with people. There is a gentleman called Ed Catmull who was the head of Pixar — obviously now Disney — and he said, “If you get the very, very best people, and you give them a medium idea, a ‘B’ idea, they’ll turn it into an A.” So, one of the most important things is to surround yourself with incredible talent. If I get the best people, they will get the best ideas, so, that’s the one thing.

What’s the second?
To be open minded, so not have a preconceived idea of how to do one thing or how one thing’s going to go ‘cos the world is moving and if you’re fixed one way in one moment of time, the world is going to have moved and you’re going to be stuck. The third thing I insist on is I need people to be able to think independently.

Yes, we reckon that would be an essential part of the process.
To be able to be contrarian, to challenge the status quo, to challenge the businesses and the current paradigm of looking at things — because the only way of changing is to break the old. Even when I hire — even a student intern — that’s one of the qualities I look for, and to have the courage to express themselves. If I have all those things and have a diversity of people and thought, then I feel that’s the best way to hedge myself from getting complacent.

“[When] I see [our jeans] on a person who’s walked out of a store — someone who has bought it or is wearing it — that’s an incredible amount of contentment and satisfaction.”

You could have been a philosopher if you weren’t a designer. So, what’s your favourite part of the denim making process?
One of them is what you’re seeing around you — this is what I described as the second part of the creative process; this is where we’re putting ideas down, you can see some ideas being formed together. That’s an exciting time because that’s when new ideas are being born, so when you see them come to life as prototypes and you follow the journey right to the point where it hits market, you get this kind of excitement deep inside you. For example, in stores you’d see a jean called the 505C and I remember that maybe a year and a half ago when we first had the idea, I went to Karyn [Hillman] (Chief Product Officer) and said, “I’ve always loved the 505s, I think we should redo this,” and we began talking about the history of the 505s; how it was on the Rolling Stones Sticky Fingers cover, The Ramones, Debbie Harry — loads of different stories about the 505s, we were so excited to see it. So, when we see it go into the store, then, I see it on a person who’s walked out of a store — someone who has bought it or is wearing it — that’s an incredible amount of contentment and satisfaction.

This question has no relation to denim but we couldn’t help but notice that you dropped a quote in almost every question we asked. So, what’s the ultimate quote that resonates with you?
Oh my god, that’s going to take me a while.

Well, we only have a couple of minutes left, so, best to think fast!
You’re right… I have a lot. Could I give you a couple?

We can work with that.
These aren’t the ultimate ones, but these are the ones that I have in my head right now. One of them is by Bob McDonald, the CEO of Procter and Gamble, he was the old boss of our current CEO, he led Procter and Gamble through decades of unprecedented growth and he said, “Whilst promotions might win quarters, innovation wins decades.” So, it tells me that you can make things cheaper and sell more but the most important thing is to innovate and reinvent yourself so you can remaster yourself.

Very nice. What’s the other?
The other one I would say is from Jack Welch, the CEO of General Electrics, and he said, “If internally you are moving slower than externally, then it’s over.” I know that gives me pressure as a designer to want to change things and move the company forward and to not be complacent because if I think business is as usual and that everything’s okay, then it’ll be over because I won’t be changing.

JUICE met Jonathan Cheung during the Levi’s® immersion trip in San Francisco in September. Keep up with Levi’s® Malaysian division here or using the #LiveInLevis hashtag on Instagram.